“What is another name for a gazebo?” is an interesting question because it gets at the historical and linguistic origins of the term. While “gazebo” is nowadays a catch-all name for a few different types of structures, the actual gazebo that sits in our backyards has surprising similarities with other architectural types.

A gazebo doesn’t actually have another name that can be used interchangeably to describe an open-air, wall-less outdoor structure. However, history shows that western and eastern cultures alike have built gazebo-like structures that provide an escape to the outdoors without leaving the comforts of home. Sound familiar?

Quick Answer: What is Another Name for a Gazebo?

If you look up synonyms for “gazebo” in any authoritative dictionary, there is an endless list of possible matches. Most of those names refer to structures that bear almost no resemblance to the open-air, outdoor structure with a solid roof that we know as a gazebo.

However, there are 5 terms that consistently emerge as synonymous with “gazebo” and that also describe structures with an architectural connection with the building in question.

We’ll consider each of their linguistic and historical roots and their connection to our favorite open-air venue to enjoy a cold beverage on a hot day.

Other Names for a Gazebo-type Structure 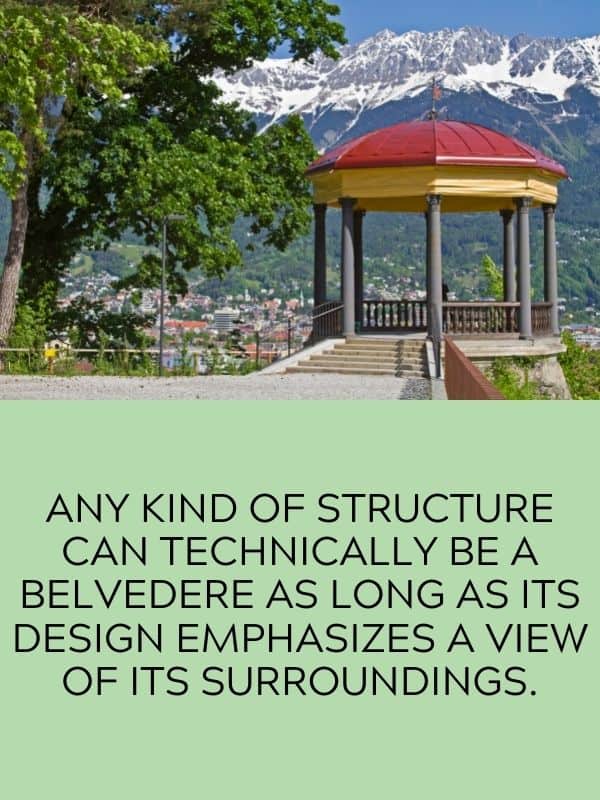 Belvedere comes from the Italian belvidere which means “fair view.” Unlike most of the structures on our list, a belvedere isn’t any one type of structure. Instead it refers to any architecture that is designed to take advantage of a particular view.

Any kind of structure can technically be a belvedere as long as its design emphasizes a view of its surroundings. The most common examples are belvederes that exist on top of European palaces and stately buildings.

On top of this type of large and ornate architecture, a belvedere can take the form of a cupola (a tower with a rounded roof), a turret (a small tower with a pointed roof) or simply, an open-air gallery.

All of these structures are towers that are either wall-less or have windows that cover the exterior. They were built to take advantage of a fantastic view.

We see the connection between belvedere and gazebo most closely in these open-air galleries built on top of palatial buildings. Both of these types of structures are designed for the person inside to enjoy a spectacular view of the outdoors. 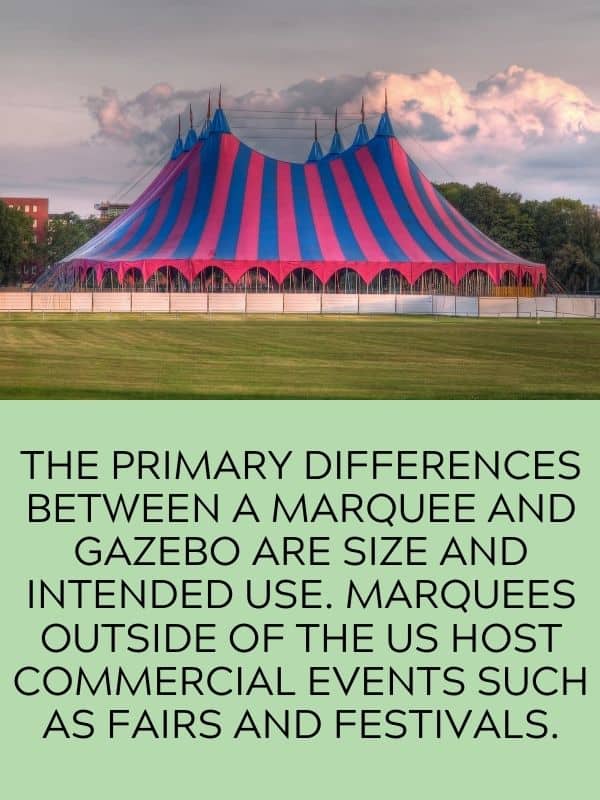 The difference between “gazebo” and “marquee” is an interesting example of the same term having a different meaning depending on where you live in the world.

For English-speakers in Britain, Australia and New Zealand, a marquee is an event-sized outdoor structure with open sides. For Americans, a marquee is a lighted canopy with a sign that projects over a music venue.

It is most common then for English-speakers outside of the US to use “marquee” and “gazebo” interchangeably. The terms refer to outdoor structures with almost identical features: open-air, solid roof, 4+ supporting columns.

The primary differences between a marquee and gazebo are size and intended use. Marquees outside of the US host commercial events such as fairs and festivals. For this reason, they are also much larger than gazebos which have a primarily residential use. 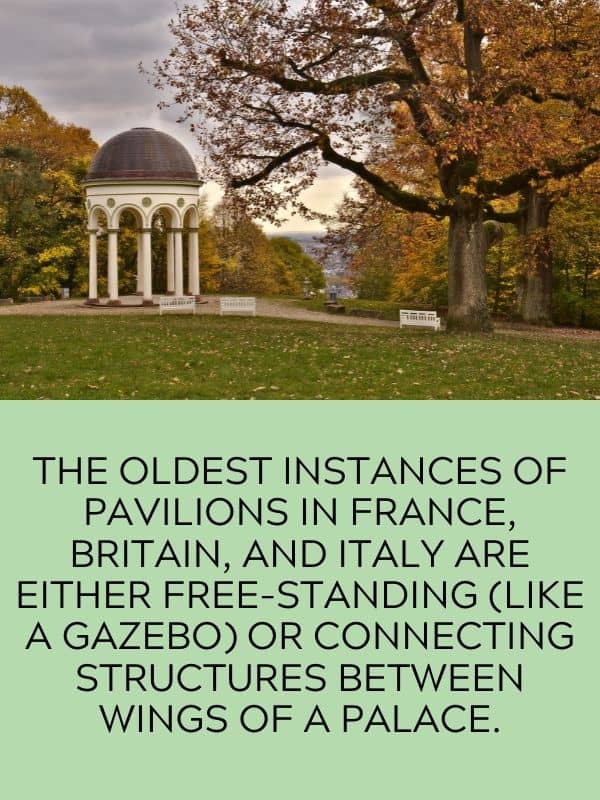 A pavilion is another interesting name for a gazebo-like structure because its connection has to do with the intended sentiment of the architecture. Pavilions, like gazebos, are buildings intended for pleasure.

“Pavilion” is a French word that comes from a Latin root. In both origins, the term means “butterfly” or “tent” because of the shape of the structure’s roof.

The oldest instances of pavilions in France, Britain, and Italy are either free-standing (like a gazebo) or connecting structures between wings of a palace. When they were free-standing, they were usually placed in a garden as an extension of living space. However, unlike a gazebo, many of them were enclosed with walls or windows.

In Europe in the 1800s, a pavilion was a recreational structure intended for pleasure as an escape from the daily grind. Interestingly, the historical record sometimes called a “pavilion” a “gazebo” when it was designed to take advantage of a particular view. 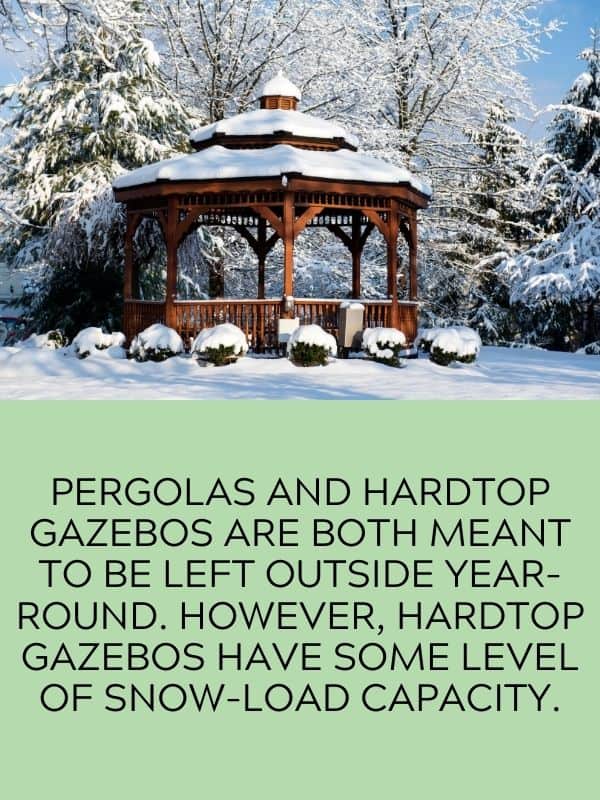 Most people today are probably trying to recall “pergola” when they ask “what is another name for a gazebo?” They are identical structures with one important distinction: a pergola doesn’t have a solid roof.

It can be easy to confuse a pergola for a gazebo if the pergola has fabric or thick foliage woven through the roof slats. There are a few reasons for why someone would choose one structure over the other but the most important one is environment.

Pergolas and hardtop gazebos are both meant to be left outside year-round. However, hardtop gazebos have some level of snow-load capacity, whereas pergolas are not at all suited for winter or rain in most climates.

In some parts of Europe and most especially in Nordic countries, a summerhouse (summer house) refers to a small building on the same property of the main house that was used for relaxation in the summer months.

Like a gazebo, summerhouses were meant for relaxation, recreation, and above all, a place to provide shade. They were often placed in the garden and had walls with windows. Contemporary summer houses look more like tiny houses or green houses than they do residential gazebos.

Like pavilions and belvederes, these structures were designed to leverage the calming effects of the outdoors. With or without walls, we clearly see the connection with our contemporary love for the gazebo life.

What Language is Gazebo?

Gazebo is an English word from the 1700s. After everything that we just learned about the connections between gazebos and other gazebo-type structures, it’s no surprise that the word comes from coupling the English word “gaze” with the Latin suffix ebo, which means “I shall.”

Gazebo = I shall gaze.

I shall gaze upon a spectacular view from a recreational outdoor structure built for pleasure and relaxation. There may be other names for gazebo-type structures, but none that describe them so perfectly.

Who knew that the linguistic and historical roots of “gazebo” were so rich? Turns out that when we’re trying to recall another name for a gazebo, we’re actually tapping into centuries of architectural history and ideas about outdoor leisure.

No matter what you call a gazebo, there’s no denying that human beings have been building structures dedicated to finding peace and relaxation outdoors for centuries.

5 Best Pop Up Gazebos to Buy