Tofu or tempeh? In this article, we're discussing tempeh so you know how it tastes, what the texture is like, and what makes it different from tofu. You'll also learn how to eat it, how to tell when it's gone bad, and what the best vegan recipes are (tempeh bacon, here we come). 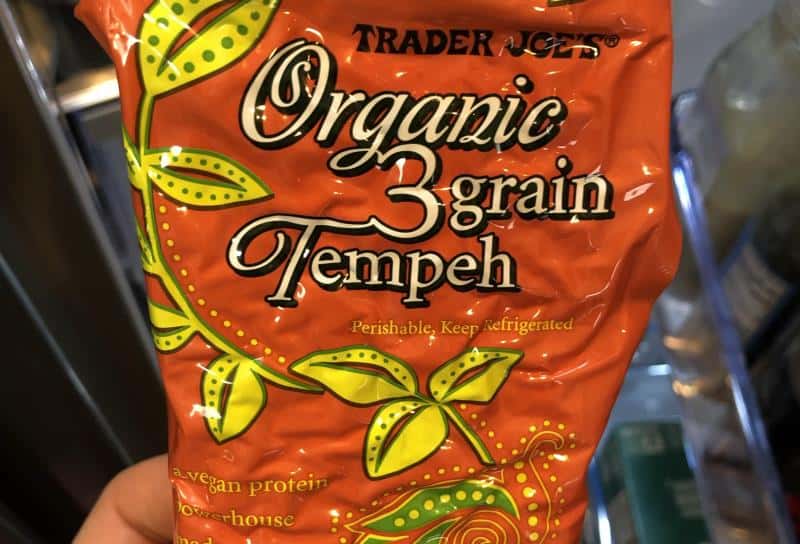 Navigate This Article Using The Links Below
What Does Tempeh Taste Like?
Tempeh Texture
Does Tempeh Taste like Meat?
Is It Safe to Eat Raw Tempeh?
Is My Tempeh Bad?
How Do You Cook with Tempeh?
Wrap Up

Tempeh is a natural alternative to tofu. Like tofu, it's made from soybeans, but the soybeans are fermented in this originally Indonesian food.

One of the characteristics tempeh has in common with tofu is what almost seems like an absence of flavor in a meal. Though it's fermented, it isn't at all tart, funky or strong.

You do get a bit of nuttiness and earthiness from plain tempeh, but it will soak in any sauces and ingredients it's prepared and take on their flavors.

While tofu is soft and spongy, tempeh is firm and grainy with an almost bread-like texture (without the crumbliness). It's chewy, but not nearly as chewy as seitan, another popular alternative to tofu.

It's often described as meaty as it has a combination of dense, chewy and tender qualities. It's also a valuable protein source, so it makes a good mock meat.

This can be confusing because tempeh is referred to as meat-like in texture, but it doesn't taste like meat. However mild, it's definitely more like mushrooms than an animal product.

There are vegan and vegetarian food brands that make their own versions of tempeh "bacon," which may also factor into the confusion. Really, it's the other ingredients in tempeh bacon that make it more meaty.

Is It Safe to Eat Raw Tempeh?

It's totally safe to eat raw tempeh. There's no need to cook it at all, though that doesn't mean you should keep it separate from a cooked recipe. It's just 100 percent edible out of the package if you're feeling lazy or you want to use it in a raw recipe.

The texture of tempeh will change if you cook it. It will go from a bit soft and moist to dry and and crisp if you place it under the broiler in the oven, which can be great for "bacon" bits. If you simmer it in a sauce or vegetable broth, it'll get super juicy and incredibly tender.

Is My Tempeh Bad?

"Is It Bad?" is not a fun game. If you need to play it, we'll help you figure out what you're looking for. Tempeh can be a little challenging if you're new to it.

Dark spots on tempeh doesn't mean that it's bad. These happen during the fermentation process, but excessive dark to black spots can be a sign of spoilage.

You'll likely see tempeh get slimy as it goes bad, but the sour, rotten smell will be the most telling sign. Generally, tempeh is considered still good if it tastes (and smells) good.

How Do You Cook with Tempeh?

There's so much you can do with tempeh. It's excellent for stir-fries, but it's also one of the best sandwich fillers of all time. Check out these videos and you'll see what we mean.

Does this vegan barbecue tempeh banh mi not sound incredible?

Here are the makings of this sandwich:

This tempeh bacon is so good, you'll be wondering where it's been all your life.

Tempeh is a very mild alternative to tofu and tastes subtly earthy. It's dense and chewy with what's considered a meaty texture, making it a great mock meat. Make your own tempeh bacon and turn it into a vegan club stacked with lettuce, tomato, avocado and vegan aioli.