In this article, we're going to cover everything you want to know about radicchio. We'll tell you about the taste, texture, how to eat it and what to do with it in your cooking. 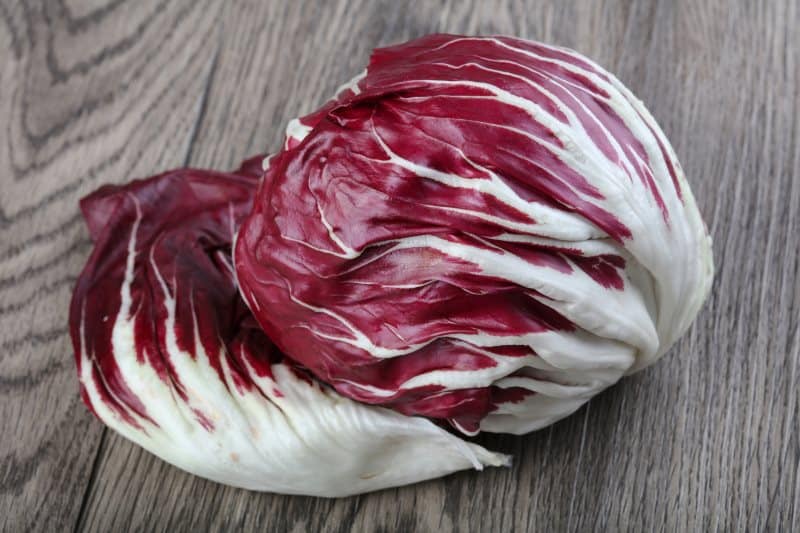 Navigate This Article Using The Links Below
What Does Radicchio Taste Like?
Radicchio Texture
Can You Eat Raw Radicchio?
Why Is My Radicchio Bitter?
What Can I Use Instead of Radicchio?
Radicchio Serving Tips
Wrap Up

Radicchio is a type of chicory that looks nearly identical to red cabbage with its round or elongated shape, purplish-red leaves and white veins. However, it doesn't taste anything like cabbage.

The dominant flavor of this leafy vegetable is bitterness. Beyond the bitter taste, there's an herbal quality similar to dandelion greens. This flavor is a subtle, softer companion to the bite of radicchio.

There is a bit of cabbage-like texture to radicchio in that its leaves are denser than lettuce leaves with a nice chewiness. However, while cabbage can be rubbery, radicchio is more crisp.

Cabbage is also tougher than radicchio. You can eat radicchio from top to bottom without it giving you a hard time, although it's still firm—just not hard or fibrous.

Can You Eat Raw Radicchio?

Raw radicchio is a common addition to spring salad mixes for its texture and strong flavor. It's probably seldom eaten raw all by itself or in large quantities, but it makes a tasty addition to a salad of lettuce and baby spinach.

You can rip up the leaves into medium to large pieces if you want to really taste the radicchio in your salad, but slicing it thinly will make it blend more with the other ingredients.

Why Is My Radicchio Bitter?

This vegetable is naturally bitter, especially raw. In this way, it's like garlic, which is incredibly potent in its raw form and quite mild when cooked.

Cooking is not the only way to take the bitterness out of radicchio. Soaking the leaves in cool water after you slice it can tone down this flavor, as can adding some salt and lemon or even a touch of sweetener.

What Can I Use Instead of Radicchio?

One of the best substitutes for radicchio is endive. Aesthetically, it comes fairly close to radicchio, though it's a different color. In terms of flavor, it's milder than radicchio, slightly bitter and crisp.

Dandelion greens don't have the same look and texture, but they have a similar taste and can be eaten raw or cooked just like radicchio. Escarole is also highly recommended, especially in salads.

Adding a few leaves of radicchio to your salad is one traditional way to eat it, but you'd be amazed at how creative people get with vegan recipes.

Salads don't have to be cold. This is a recipe for a citrusy roasted cauliflower and radicchio salad. The chef uses orange cauliflower, but you can use the white one if that's what's available at the grocery store.

If you love bitter leafy vegetables, try radicchio. It'll add beautiful color to your salads and texture to your sautes. Vegan pizza is one tempting vehicle for cooked radicchio, but people make vegan ravioli, vegetable pies and more with this flexible veggie.