Curious about annatto? We're answering all your questions about it, including what it tastes like, how the texture feels and what annatto is used for in recipes. 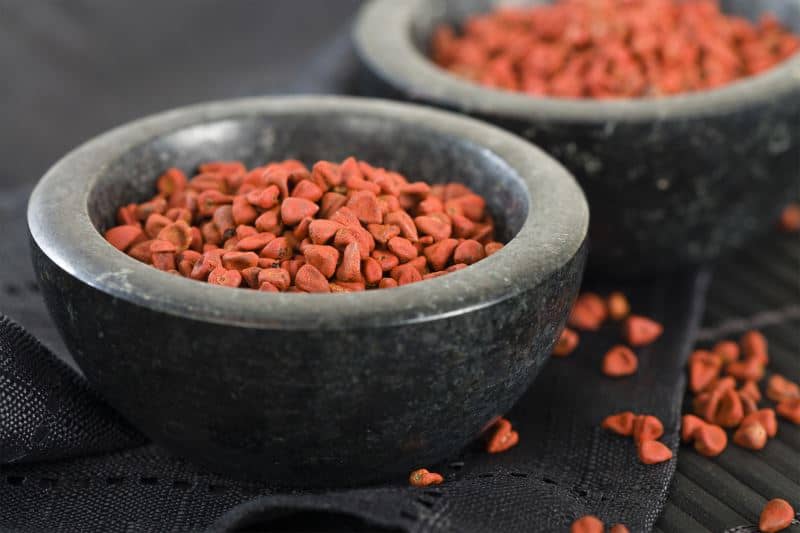 Navigate This Article Using The Links Below
What Does Annatto Taste Like?
Annatto Texture
Are Annatto Seeds Spicy?
What Contains Annatto?
Annatto Serving Tips
Wrap Up

Annatto begins as the seed of the achiote tree that grows in the Americas. It's often ground into a paste and added to various foods.

Taste-wise, annatto doesn't leave any big impression unless it's used in larger quantities, in which case it's said to impart earthy, floral and sometimes bitter flavors with a hint of pepper.

You definitely won't want to eat an annatto seed straight. It's so hard that you may struggle to grind it up in your spice grinder. Even cooking annatto seeds won't make much difference.

This is a seed that's enjoyed for its flavor but frequently used specifically for its brick red color. The best way of getting these characteristics out of the seeds and into your food is by infusing cooking oil with them.

Related Article: What Does Aloe Vera Juice Taste Like?

There may be some pepperiness to these seeds, but they're not spicy per se. Some people even find them to have a hint of tartness, but spiciness, like you'd find in chili peppers, is not a trait of annatto seeds.

One reason people might associate them with heat is that they're often used in dishes that call for chili peppers and smoky flavors.

As a colorant, annatto is commonly listed in the ingredients of orange and yellow cheeses, salad dressings, beverages and snack foods. If it has an orange or red hue, it may be colored with annatto.

As a condiment, annatto is typically used in a variety of non-vegan dishes, but it can be added to vegan sauces to simmer tofu or any mock meat in.

If you're using tofu, remove the excess moisture by pressing it so it will be more flavorful. You can check out our top five picks for top 5 best tofu press if you're thinking of buying one.

Now for the good part—seeing how you can add annatto to your recipes. You can certainly use it when cooking Mexican and South American dishes, but it also pairs well with Asian-inspired flavors.

This is a recipe for a flavorful vegan version of a Yucatán dish called cochinita, similar to enchiladas.

Here's a way to use annatto in stir-fry. The flavor is perfect with shiitake mushrooms, onions and garlic.

Gather these ingredients together:

Annatto is a very mild-tasting seed that's mainly used for color and a hint of earthiness in a dish. Flavor your favorite cooking oil with it and use it in your enchiladas and stir-fries. Just don't try to eat the seeds directly—ouch!