Zucchini noodles are taking the foodie world by storm. Haven't had a chance to try them yet? We're going to tell you everything you need to know about taste, texture, cooking methods and more. 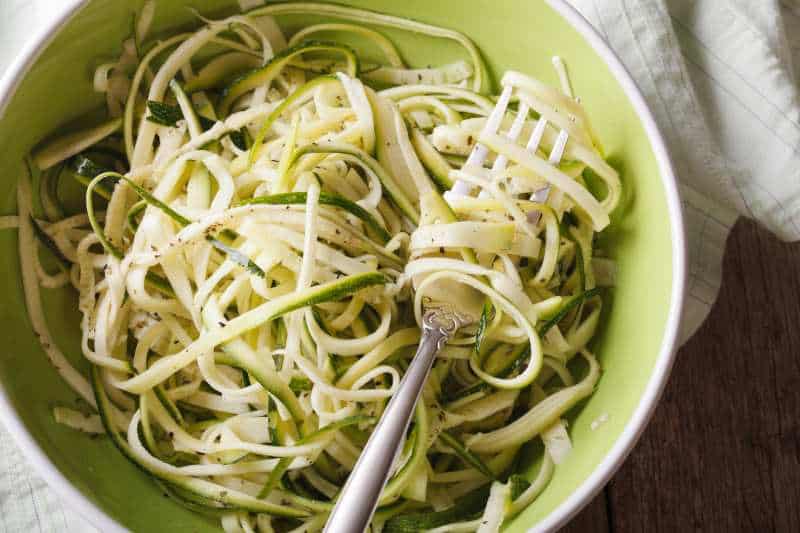 You might not expect zucchini noodles, or zoodles as they're lovingly called, to taste like pasta, but they kind of do in the way that they don't have a strong flavor. Instead of contributing a specific taste, they absorb the flavors of the sauces and ingredients they're mixed with.

Still, there are little things about the flavor of zucchini noodles that make them novel. Like the vegetable, the noodle-ized version of zucchini is fresh-tasting, though it can be a touch bitter when raw. However, this goes away when the noodles are cooked.

Zucchini noodles are soft, making them a great substitute for cooked pasta. Overcooking is a danger with zucchini noodles as they're already so tender, but even super squishy zoodles can be good.

They're very moist, and if you make them yourself, you'll probably notice some water sitting at the bottom of the bowl of freshly spiralized zucchini. That's O.K.—the zoodles will only exude water like that for a short period of time.

Do You Eat Zoodles Raw?

You most certainly can eat zoodles raw, and a lot of people do. In fact, if you like al dente pasta, raw zucchini noodles are totally appropriate to "cook" with.

Raw zucchini noodles contribute wonderful texture to cold salads and dishes like sesame noodles, but you can also toss them in warm red sauce and eat them like traditional spaghetti.

Can You Boil Zucchini Noodles?

Boiling your zoodles is an option, but it's a surefire way to overcook them if you're not watching carefully. On the flip side, boiling them only takes about a minute, so there's no faster way to cook them.

If you boil your zoodles, strain them like regular pasta and pat them dry so that they can soak up whatever sauces you'd like to top them with.

How Do You Make Zucchini Noodles Not Soggy?

Raw zoodles will probably be the least soggy, but even they can be a little wilty if not prepared properly. To dry them out, sprinkle on some salt and let the water drain for at least a few minutes. Afterward, you can brush the salt off if you don't want the added flavor in your meal.

You can also stick with the outer parts of the zucchini, which are naturally less mushy than the innermost part. You don't need to toss out half of the zucchini—just don't use the core with all the seeds.

What Is the Best Way to Cook Zucchini Noodles?

Lightly cooking your zoodles is the best way to prepare them without risking sogginess. You don't even need to boil them first. Just add them to a pan you're cooking your other veggies in along with some oil or sauce and cook for just a few minutes.

First, we're going to see how to make zucchini noodles. Because not everyone has a spiralizer, it's good to know how to use common kitchen tools for the job, as shown in this video.

Shake up pasta night with zoodles. You can eat them raw or cooked—just be careful not to overcook them or they'll get soggy. Have them warm with marinara or vegan pesto, but don't forget to try them cold as vegan Thai peanut sesame noodles or even coleslaw.