In this article, we'll tell you all about cappuccinos, including what they taste like, how they're different from lattes, and what makes the best vegan cappuccino if you're looking to avoid the dairy. 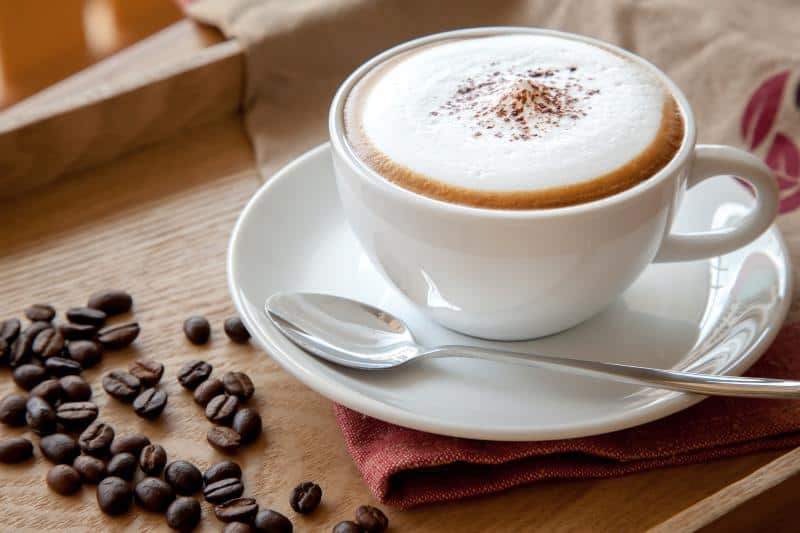 The famous cappuccino tastes creamy, a little bitter and mildly sweet from the milk. Note that dairy milk is what's usually used in a cappuccino from a cafe or restaurant unless you specify that you'd like vegan milk.

If the espresso used is particularly bitter, it will be reflected in the flavor of the cappuccino. Hopefully it won't be overly bitter, but some added sugar will cut down on this flavor. Other tasting notes in a cappuccino may include nuttiness, bright acidity and dark chocolate.

Cappuccinos have rich, creamy textures, just like lattes. But there are differences between them, and the biggest one lies in the foam (called microfoam).

Whereas a latte is mostly milk and espresso with a thin layer of microfoam about an inch or so thick, a cappuccino has a thicker layer of foam that can be up to several inches deep if you like it on the dry side.

Additionally, latte microfoam should be denser with smaller bubbles. In contrast, cappuccino foam tends to produce slightly larger bubbles and may even be like meringue.

Though the cappuccino is a coffee beverage, it's really nothing like a cup of coffee. You may add milk to your coffee or drink it black. Cappuccinos are never served "black" as they're already prepared with your choice of milk. For this reason, cappuccinos taste sweeter than coffee.

The nuances of a cup of coffee may also get lost in a cappuccino. Some people prefer their coffee black because they enjoy the subtle flavors of each particular roast and bean, but with added milk, these delicate flavors can become muddied and hard to detect.

Drinking a cappuccino is very much like drinking a cup of coffee with milk in it, though it's not exactly the same. A cappuccino is made with mostly frothed milk and a little espresso, but your average cup of joe is mostly brewed coffee and a maybe a splash of milk or vegan cream.

Is a Cappuccino or Latte Stronger?

In terms of caffeine content, cappuccinos and lattes are equal (unless you ask for one with an extra espresso shot). From this point of view, neither is considered stronger.

However, there is something to be said about the strength of the cappuccino flavor, especially if it's dry. The milkier a beverage is, the mellower the espresso flavor will be.

As the milkier of the two, the latte might come across as weaker than the drier cappuccino as the foam doesn't absorb as much of the coffee flavor. So in a way, cappuccinos are stronger than lattes.

You need an espresso machine and milk frother to make a genuine cappuccino at home, but a cheat code for a cappuccino as good as the real thing just takes heating up your favorite vegan milk in a saucepan until foamy and brewing some really strong coffee.

If you do have a steamer at home, this video will show you how to steam almond milk perfectly for a cappuccino. Really, you can use any kind of plant-based milk you'd like. The tastiest cappuccinos have the silkiest foam, which soy milk, cashew milk and macadamia nut milk provide.

Would you believe us if we said we found a video that'll show you how to make a raw vegan cappuccino? Here's what you'll need (plus a blender):

The milky, frothy coffee beverage known as the cappuccino is as popular as ever, smooth, creamy, slightly sweet and slightly bitter. If you order one at the coffee shop, make sure you ask for soy milk or any vegan milk they carry. But there's no reason you can't make your own at home—even tasty, refreshing raw vegan cappuccinos.