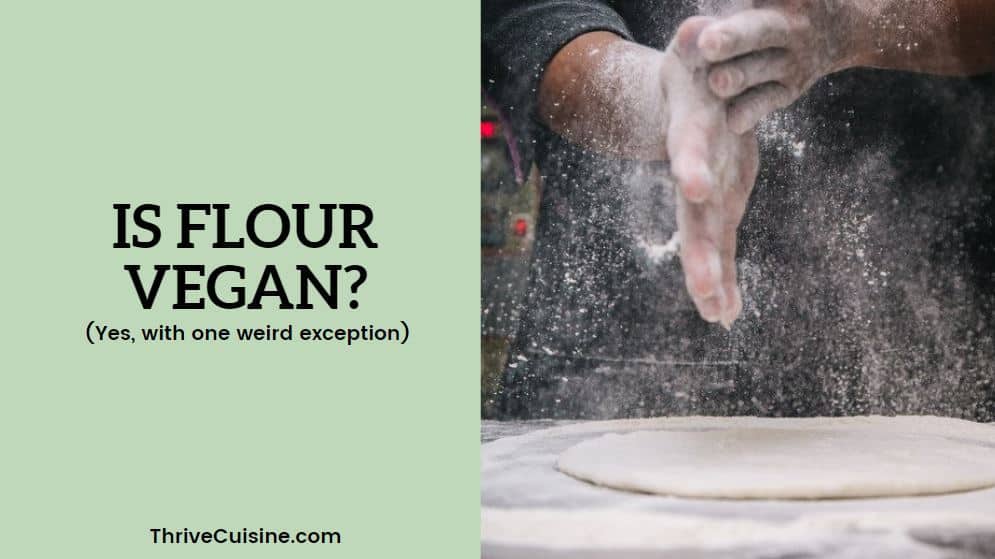 Is flour vegan? Does it contain any animal products?We’ve documented the vegan-status of almost any type of flour you can imagine…

But if you’re in a hurry, here’s the low-down:

The short answer is yes, flour is vegan and you don’t have to worry about it.

Before you read the rest of the article, I wanted to make you aware of something:Most people who go vegan don’t succeed and go back to eating animal products.

The main reason for this is lack of education – not because the lifestyle itself.

If you’re new on your vegan journey and want to make sure you succeed in the long term, we highly recommend checking out this Vegan Starter Kit.

Click the link above to check it out or keep reading for the full guide.

When people think of flour, wheat flour often comes to mind. Wheat flour—as the name implies—is made from grinding the wheat plant into a powder.

When a flour is labeled “whole wheat,” this just implies that the whole grain of the plant was kept intact before grinding.

Really, flour can be created from so many different types of starchy and fatty plant foods. Alternatives to wheat flour, such as oat flour and almond flour, have their own unique flavor profiles and applications.

Sometimes alternative flours are easier to make at home than to buy because they aren’t locally available or produced in mass quantities. Yes, you can make your own oat flour simply by grinding up a given grain, legume or not.

The answer is that flour is vegan 99.9 percent of the time. We’ve gone through multiple types of flour and brands to give you the most precise answer possible.

Sometimes the ingredient statements of flours can get confusing.This is because flour is fortified with certain vitamins and minerals in accordance with food and beverage laws created in the mid-1900s.

The trouble lies in the names of the vitamins and minerals that fortify these flours.They tend to have names that don’t sound familiar, and naturally, vegans are going to balk at them.

For new vegans, every ingredient may look like it has the potential for harming animals, but you can rest assured that flour (with very few exceptions, as we’ll detail below) is vegan.

Want to learn how to shop as a vegan?Our printable grocery list can help!

Related Article: How to Freeze Rhubarb

The vast majority of flours are vegan. Obviously, cricket flour is not, but it’s neither super common nor an ingredient you’ll be looking to buy, anyway. The type of flour you do buy should be suited to its purpose. That is, bread flour makes the best breads while cake flour is ideal for cakes. Even if you aren’t gluten-free, you can use naturally gluten-free flours like chickpea flour and coconut flour in all sorts of scrumptious vegan recipes, so explore all the options!