The Gotham Steel and Red Copper Pans are the latest craze on late night TV. The commercials make them seem like they're going to completely change your life in the kitchen, but is all of the hype true? This Gotham Steel vs Red Copper guide aims to find out... 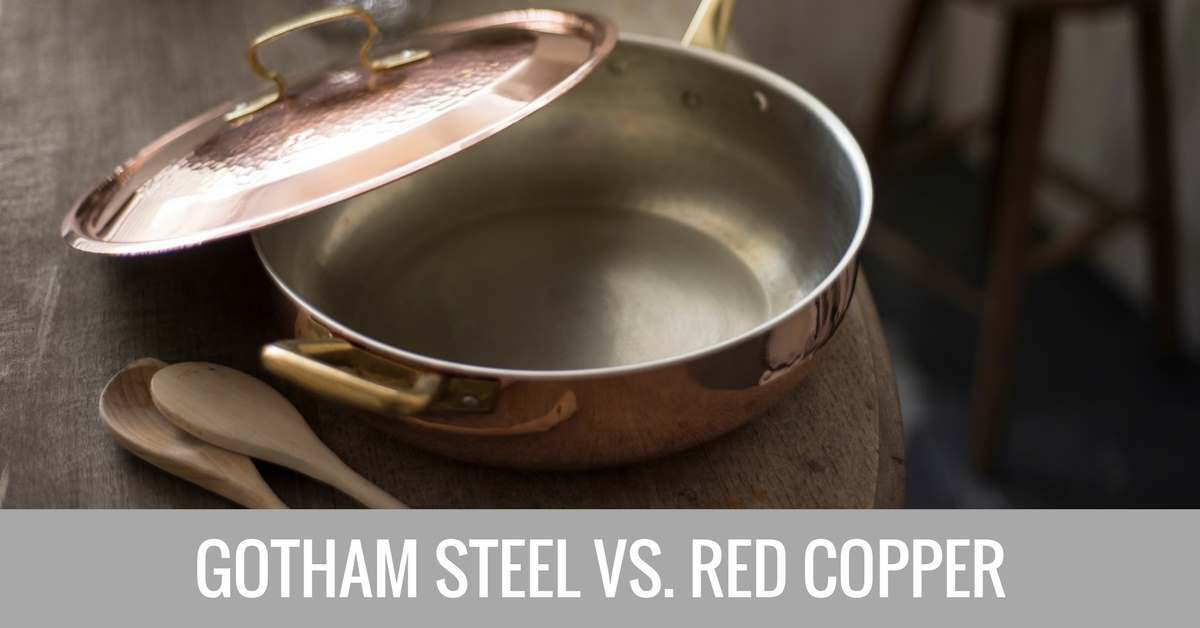 As with most things that are sensationalized, the answer lies somewhere in the middle. We've done all the research on both of these pans so that you don't have to.

The Claims for Gotham Steel Pans and Cookware

The Gotham Steel pan claims to be the best nonstick pan you've ever bought. Based on the commercial, food won't stick to the pan nor will the pan scratch. Gotham Steel advertisements don't seem to be way over the top like some of the other late night TV offers, they really just claim to have an awesome nonstick pan.

Most users who get the pan are indeed happy with its nonstick ability. We've seen reports over the course of six months where the pan was still performing up to snuff. With any nonstick pan, you're likely to see some wear over time and some degradation in its nonstick ability, but this isn't unique to the Gotham Steel. Many of the ceramic nonstick pans out on the market today seem to perform same way, but are just branded and marketed differently.

The most common complaint we see about Gotham Steel cookware is that they don't live up to their promise of not sticking. However, during our research we found that the verdict on this was extremely mixed. While some people swear against the pan, others were vouching strongly in favor of it. In our experience, this usually indicates that the people complaining about the product took the advertising at face value and neglected to follow any instructions that came with the pan. It's unfortunate for the manufacturer's who often get bad reviews for these types of items because they simply over promise rather than set realistic expectations.

Also, using common sense is very important. Slow gentle heat is often the best and safest way to cook on nonstick pans. If you put something on the pan and crank up the heat to ultra high, you're setting yourself up for disaster, despite what the commercials say.​ Even abuse on these types of pans works once or twice, it increases the likely-hood of wear over the long run. This pan may absorb and conduct heat the same way as your other pans, so starting off low is optimal.

​With nonstick pans, some users will crank up the heat, find something a bit caked on, and then immediately put the pan into cool water. This is a disaster for nonstick surfaces as well as using non-stick sprays which most user manuals will say not to do (but people neglect to realize).

Do not use this pan without reading all the directions or without using common sense!

What About the Warranty?

We write about blenders quite a bit and if you've read any of our stuff you know that Blendtec and Vitamix are always the brands we recommend first. This is because they have 7-10 year warranties and makes their generally high price tag well worth it because you know its going to last. We haven't been able to say the same about any nonstick pan on the market - probably because they all have a tendency to wear no matter how good the coating is.

The only way to get cookware that you're sure is going to last a lifetime is to invest in cast iron or high quality stainless steel. But obviously, these don't offer the ease and convenience of nonstick.

Now the Gotham Steel pan does come with a "lifetime warranty", but what does this mean? According to their Warranty Terms this means you have to send the pan back plus nearly ten dollars to process the replacement. Being that you also have to ship the pan back, you're going to be spending potentially close to what the pan cost you in the first place (prices vary). It's our best guess that it wouldn't make that much sense to actually go through with that warranty.

Conclusion on Gotham Steel (Comparison Below)

For most people this is going to be a decent nonstick pan, but just don't expect the world. It typically commands a fairy low price point and if you take proper care of it and follow all manufacturer directions and its likely to last you quite a while!

How Does Gotham Steel Compare to Red Copper?

We've written extensively about the Red Copper Pan compared to the Copper Chef, but what about Gotham Steel vs. Red Copper? Let's get into the differences and similarities between these two pans. At the end of the day - they aren't all that different.

Which Would We Choose?

As we stated earlier, many of the nonstick pans on the market today perform similarly, but are just marketed in a different way. Our recommendation is to check the pricing at the time of purchase and buy the one you're going to get a better deal on. There aren't enough major differences where we would pick one brand over the other.

In this artic﻿le where we compare all different types of cookware surfaces, we made the recommendation to not overly rely on nonstick surfaces such as ceramic for all cooking jobs, but to have a decent pan in your arsenal (that you're going to take good care of) for things like stir fry. Either the Red Copper or the Gotham Steel would likely be a good choice for this, but again - don't expect the world from them or any nonstick pan on the market today.

We do also recommend you check out our article on Tfal ceramic cookware to compare some of your other choices.