Wondering how to choose between enameled cast iron and regular cast iron? You’ve come to the right place. In this guide, we’ll get into the pros and cons of each material.

What Are the Main Differences? (Comparison Chart)

The chart below illustrates some of the main differences between traditional cast iron and enameled. For the frequent home cook, it may be wise to have both types on hand as they really do cater to different uses.

Note that these attributes are to be looked at on the whole and may not apply to every single piece/brand out there.

With anenamel coated skillet or other cookware, there’s no need to worry about seasoning it as it will perform similar to any other non-stick cookware.  This is a plus if you are one that likes to limit the amount of oil that you cook with or make water-based items such as soups or sauces in your unit.

Traditional cast iron cookware is literally just a hunk of iron that’s shaped into a pan or pot. This means that you have one color option: black (or dark grey).

On the other hand, enameled pieces come in several different colors. If you’re an avid entertainer and/or like your decor to be on point, you’ll have lots of options to choose from. This also means that your enameled cast iron pieces typically are great to place on the table as well as people can serve themselves out of them in style. You can surely do the same thing with a traditional cast iron piece, but you really only see that with fajitas.

Available Heat Sources You Can Use

Aside from a microwave which should NEVER be used, traditional cast iron offers a lot of options when it comes to what type cooking device can be used. This includes the following:

To learn more, you may check out this article on the best microwave toaster oven combo.

When you get an enameled piece, its not recommended that you use them on grills, campfires, or any sort of open flame. This is because they have temperature limits (usually up to 500F) and you don’t want to run the risk of it getting too hot.

That being said, if you’re going camping or wanting to throw your cast iron on the grill, the traditional cast iron is probably the best way to go.

Either way, you’ll likely want to pick up a set of heat resistant gloves or mitts.

Charring and Browning on Each Material

Using a traditional cast iron is going to make it way easier to get that “char” that you might be looking for. In the video below, notice how the chickpeas get those black spots towards the end and the broccoli has the fire roasted look around the edges.

With an enameled piece, it may be a little bit more difficult to achieve this, but not to say that it is impossible.

How They Handle Acidic Foods

If your traditional cast iron skillet isn’t well seasoned, cooking with acidic foods may remove the seasoning from a weakly seasoned pan and give the food a metallic taste. If you’ve been cooking in your cast iron for a while though and its a well seasoned and well built piece, then there shouldn’t be an issue.

An enameled piece is going to be able to handle whatever you throw at it from day one, like a normal pan. That means you don’t have to worry about the pH of your foods right from the get go.

Recommended Article: Copper Chef vs. Red Copper [And How to Avoid Common Problems]

What Are The Different Temperature Thresholds?

Being that a traditional cast iron skillet should be made up of all iron, most models should have a much higher threshold than their enameled counterparts. From what we’ve seen, most traditional units don’t really have any temperature warnings, so if you’re going to be doing something really extreme outside of the recommended cooking methods, we suggest contacting the manufacturer.

As far the enameled pieces, many of the units we’ve seen have the same temperature threshold of up to 500F.This is still very high is is going to work for putting it in the oven which is one of the primary benefits of these units compared to a regular pan.

Given the nature of what it is, the traditional cast iron is going to be the more durable of the two. Having the piece enameled adds an extra element of durability such as scratching and chipping. A good quality unit will be resistant to this, but the possibility is always there.

Most enameled units are going to be dishwasher safe, but most likely not recommended. As for the standard cast iron skillet, never throw it in the dishwasher!

What Units Would We Recommend?

For the typical cast iron skillet, going with a Lodge is probably going to be your best option. They are made in the USA and known for their top notch quality. We chose the

We’ve linked their 12″ cast iron above, but they’re also manufactured in different sizes and designs – including deep irons! If you want to see more cast iron options – check out our best cast iron post where we feature some other options from Lodge.

Again, we had to link another Lodge unit for our pick for enameled cast iron. With the enameled option, you’re going to have a lot more choices in terms of size and functionality. We’ve linked the 6 quart green dutch oven below, but they also make the same unit in lots of different colors and sizes! 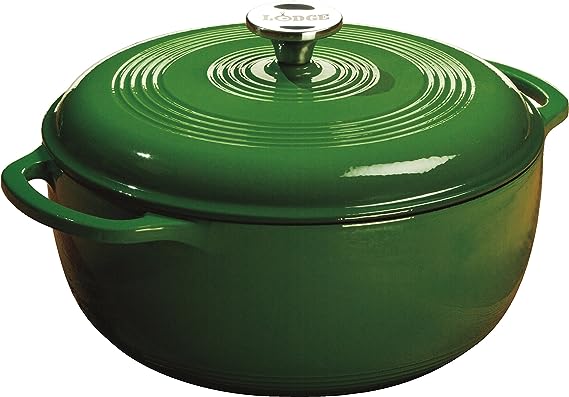 What Can I Cook With Cast Iron?

As usual, we’ve got some great culinary ideas for everyone who is going to be experimenting with traditional cast iron or enameled. For the traditional cast iron – this plant based Bibimbap Recipe from One Green Planet is an awesome way to explore a colorful assortment of veggies and plant-based proteins infused with the flavor you can only get from a cast iron skillet.

For an enameled pot or dutch oven, baked beans seem like the perfect thing to make. Did you know that you can make delicious baked beans with no refined sugar and get your greens in at the same time?

Check out this recipe to learn more!