There seems to be general confusion as to what is the difference between gazebo and marquee? When we started diving into the answer, we quickly discovered that the confusion was easy to set straight.

The term “gazebo” refers to the same type of structure no matter where you live in the world. For english-speakers across the globe, a gazebo is a residential (occasionally public/commercial) outdoor structure with a solid roof but without walls.

On the other hand, the term “marquee” refers to different structures depending on your geographic location.

For British, Australian and New Zealand citizens, a marquee is an event-sized outdoor structure with open sides. For Americans, a marquee is a projecting canopy over an entrance to a place of business, most especially a music venue with a sign above.

The difference between an American music venue and a gazebo is clear. So in this post, we’ll focus on the more nuanced distinctions between a gazebo and a marquee for English speakers outside of the US.

Quick Answer: What is the Difference Between Gazebo and Marquee? 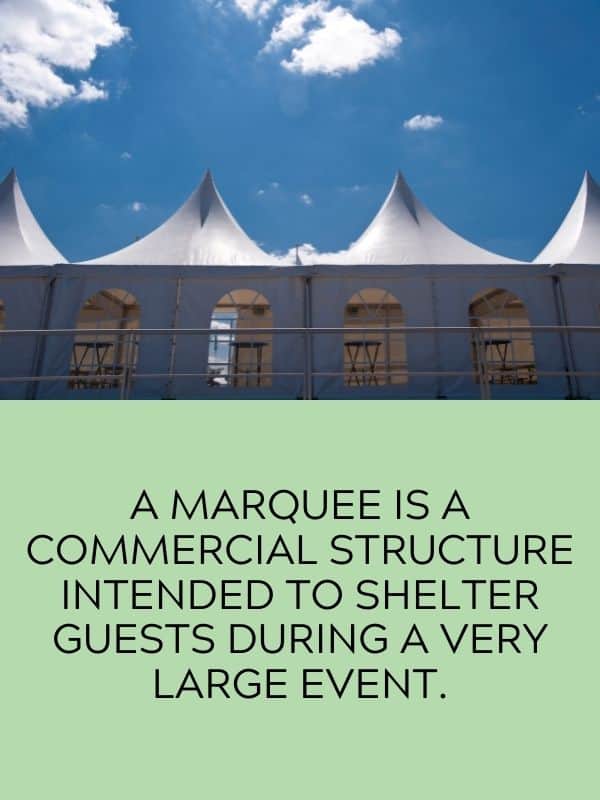 There are two primary differences between a gazebo and a marquee: size and intended use.

Gazebos are much smaller outdoor structures that are meant to supplement a home garden or backyard. A marquee is a commercial structure intended to shelter guests during a very large event.

Residential hardtop and soft top gazebos don’t usually exceed 18ft x 18ft (5.4m x 5.4m). A gazebo of this size is considered extra large and can comfortably accommodate about 12 people with a full set of furniture.

Marquees look nearly identical to soft top (fabric-covered) gazebos but they are much larger structures. It’s not uncommon for event companies to rent out marquees as large as 30ft x 90ft (9m x 27m). These massive structures are intended for large gatherings and can hold as many as 400 people standing or half that number when tables and chairs are present.

What is Another Word for Marquee? 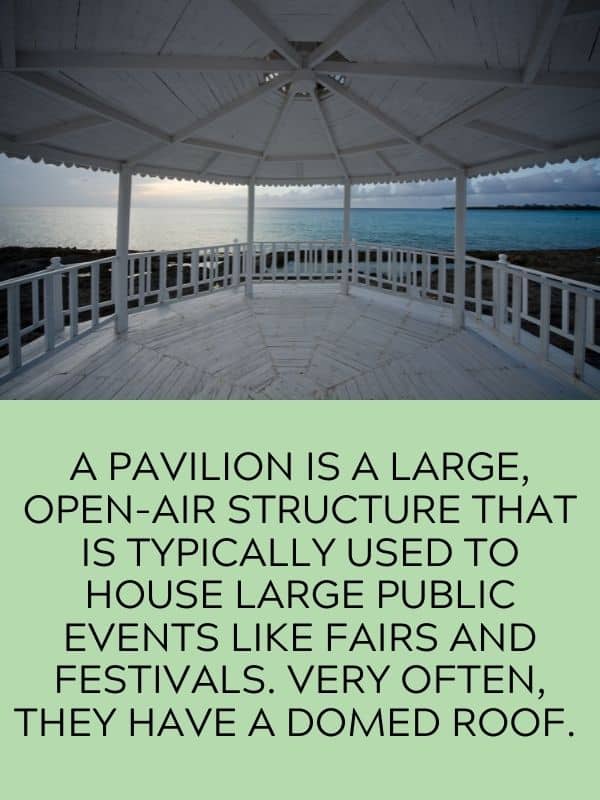 The etymological root of the British word “marquee” is derived from the French “marquise” (also “marquis”). In British English, the word is used as a catch-all term for any large tent.

There are a few other terms used in the english-speaking world to describe large outdoor structures like a marquee. These include canopy, dome, and pavilion. While these structures have many similarities with a marquee, they are all different.

A canopy refers to the fabric that covers a structure or piece of furniture. Some gazebos are covered with a canopy. While there are some marquees with a stretched fabric roof (traditional circus structures are the most familiar marquees with these kinds of roofs), a canopy and a marquee are distinctly different structures.

A dome is a rounded vault that acts as a roof for a structure. A dome is one of the most iconic forms in architecture. They’re usually seen in churches, cathedrals and civic buildings in Europe and the United States.

A pavilion is a large, open-air structure that is typically used to house large public events like fairs and festivals. Very often, they have a domed roof.

What is the Difference Between a Tent and a Marquee?

There are two main differences between a tent and a marquee: size and portability.

In the English-speaking world, regardless of location, a tent refers to a small structure that is highly portable. A shelter for camping, tents are meant to set up and be taken down in minutes. It is a temporary shelter that travels well and can accommodate 1-4 people sleeping.

Like we have already seen, a marquee is a very large outdoor structure designed to house public gatherings of several hundred people. Unlike tents, marquees are often open-air (without walls) and take significant effort and time to erect and take down. They are not nearly as portable as tents.

What is the Difference Between a Gazebo and a Pergola? 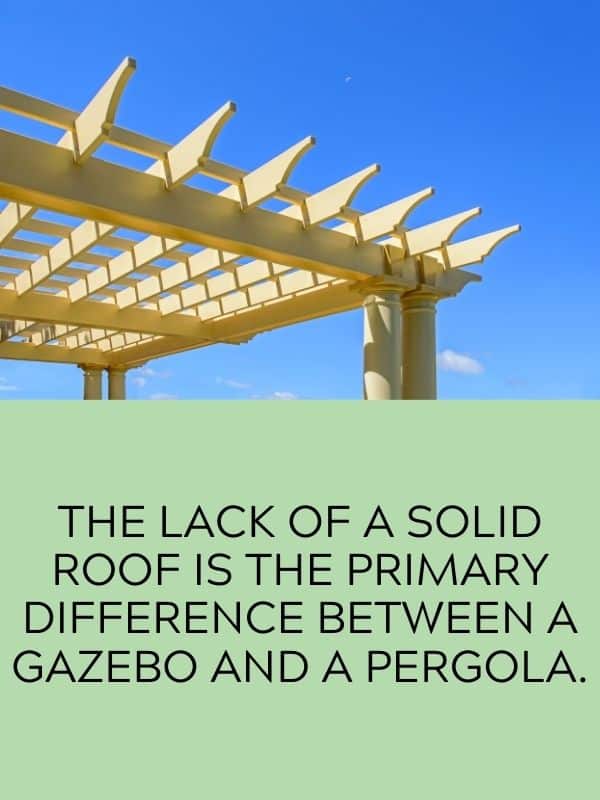 Like a gazebo, a pergola is an open-air, outdoor structure with vertical columns. While it technically has a roof, the roof is never solid. It’s always slatted in some way, letting in some sun.

The lack of a solid roof is the primary difference between a gazebo and a pergola.

In the United States, you will find gazebos and pergolas in gardens and backyards in equal measure. For all intents and purposes, they are basically the same structure. However, there are a variety of important considerations when deciding between a gazebo and a pergola.

For Americans, the difference between a gazebo and marquee is clear: there is little to confuse between the lighted entrance to a music venue and the “big top” of a circus.

For English-speakers outside of the United States, the difference between gazebo and marquee is much more nuanced. It has to do with size and function.

Bottom line, if it’s in your garden, it’s a gazebo. If it has a staffed open bar and a dance floor, chances are it’s a marquee.