In this article, we're talking about oregano. We'll answer your questions about the taste, texture, substitutions and recipe tips for delicious meals. 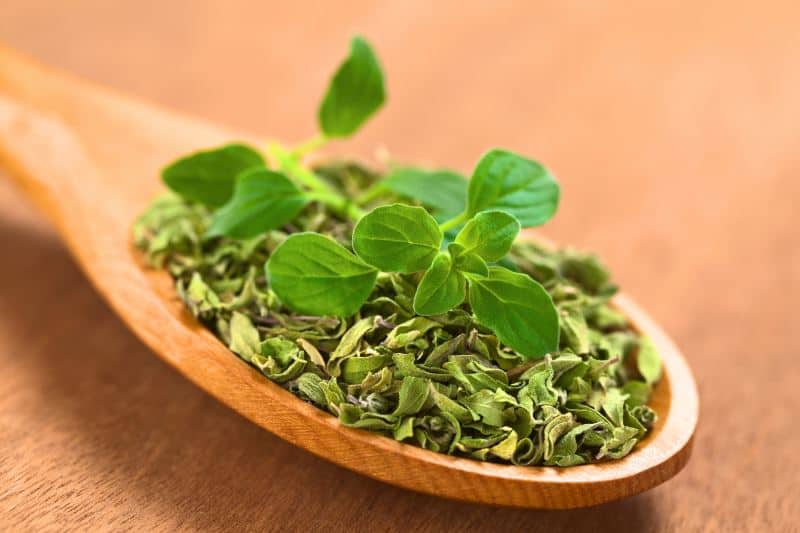 Navigate This Article Using The Links Below
What Does Oregano Taste Like?
Oregano Texture
Can You Eat Fresh Oregano?
Can I Substitute Oregano?
What Food Goes Well with Oregano?
Oregano Recipe Tips
Wrap Up

Oregano is a pungent herb with bitter, grassy flavors and a trace of mint. At least, fresh oregano leaves have these qualities in abundance, which some people love and others shy away from in favor of the dried herb.

You may have topped a slice of vegan pizza with dried oregano from a shaker. This kind of oregano takes on a flavor similar to dried basil, gentle and slightly woody with a modest sweetness.

The dried version is crumbly with the texture of crisp, dry autumn leaves. Even so, it usually doesn't impart any texture you can detect when you cook with it.

A sprig of fresh oregano has soft leaves that are a little denser than basil leaves. They're easier to chop than they are to tear, though they won't give you a hard time.

Can You Eat Fresh Oregano?

Yes, you can absolutely eat fresh oregano. Who knows? You may even side with the foodies who'll take the fresh kind over the dried any day.

This type of oregano is best for salads, pesto and marinades. Quite often, dried oregano is listed in recipes for tomato sauces, but fresh oregano can be used instead if you love the bolder, brasher flavor.

Can I Substitute Oregano?

Basil is going to be one of the top substitutes for oregano, especially if we're talking about dried herbs. But fresh basil is robust and similar enough to replace fresh oregano, too, especially in Italian cooking.

Thyme is also recommended and may even be a better substitute than basil. It has a close flavor profile in pungency, bitterness and minty undertones.

What Food Goes Well with Oregano?

Any Italian red sauce recipe can be enriched with oregano, but tomato-based sauces of all sorts, including those of Greek and Mediterranean cuisines, are good places to start.

It's potent enough to be the dominant flavor in a recipe, but oregano is totally blendable with a wide variety of seasonings.

Using oregano effectively in your cooking is easy. Generally speaking, it's good to match it with deep, bold flavors, as you'll see in these videos with familiar vegan recipes.

If you've never made a vegan bolognese, there's nothing to it. If you make it for family and friends, it's a meal they're going to request again and again.

A savory tart with garden-fresh veggies like this one says summer. It's gluten-free, but you can use any flour you like. Play around with different veggies, too, and you can have seasonal tarts any time of the year.

Here's what you need to make it:

Oregano is a vigorous herb, earthy, grassy and a touch minty. Dried oregano is milder and good for sauces while the fresh kind is nice for salads and raw soups. Any kind of oregano will add pep to savory vegan tarts, tomato sauces, hummus and roasted vegetables.