In this guide and FAQ, we’ll cover everything you ever wanted to know about vegan rice brands, different styles of rice and the vegan status of rice served and different restaurants.

Here I’ll include a variety of vegan rice brands you might want to check out. They’re all going to be different types (bulk, instant, etc.) so you’re sure to find something that suits your fancy.

Do note, that not every product that these brands make are vegan. These are just a few good ones that we’ve picked out. 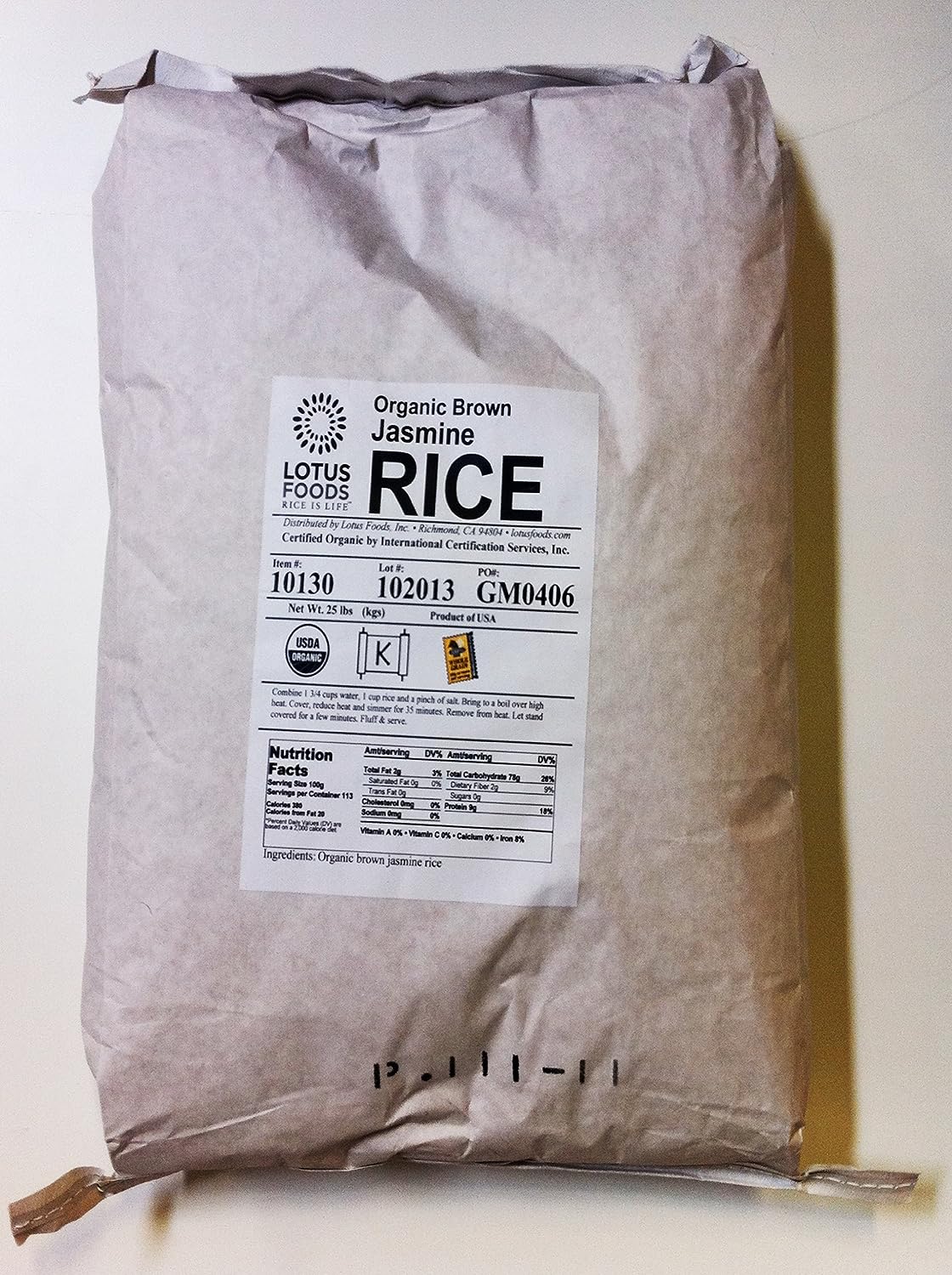 This is the best product on the list because it’s a bulk bag of rice! It’s super cheap (per pound) and lasts a long time. Keep it in your pantry for vegan stir frys, rice balls and more. 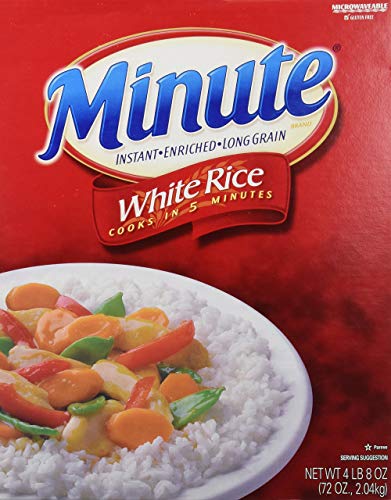 This is a plain white, boil in the bag variety of rice. It cooks up really quick when you don’t have time to bust out the rice maker. Since it’s in a bag, there’s very little mess in terms of starchy pots and whatnot. 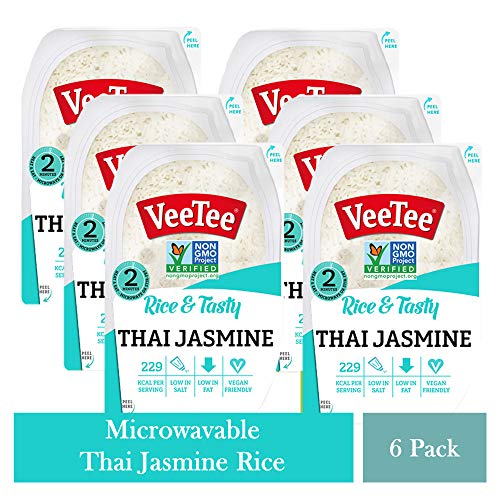 If you’re in need of a quick lunch, this is so simple. Just microwave up this Jasmine rice, open up a can of chickpeas or lentils and viola!

You may also want to check out our article on the best microwave toaster oven combo. 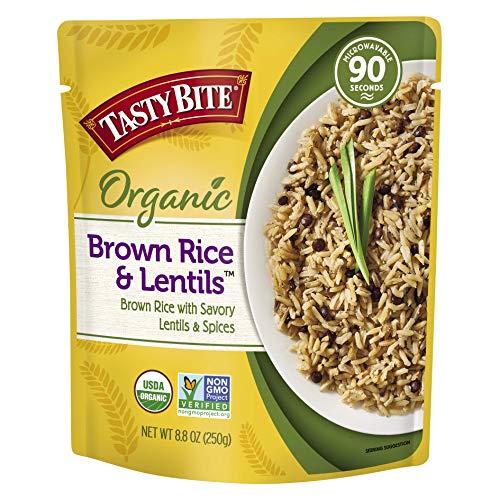 A complete meal of brown rice and lentils that you can just throw in the microwave. Tasty Bite makes all sorts of combinations and the ones that I’ve seen are always vegan. They’re always spiced perfectly as well! 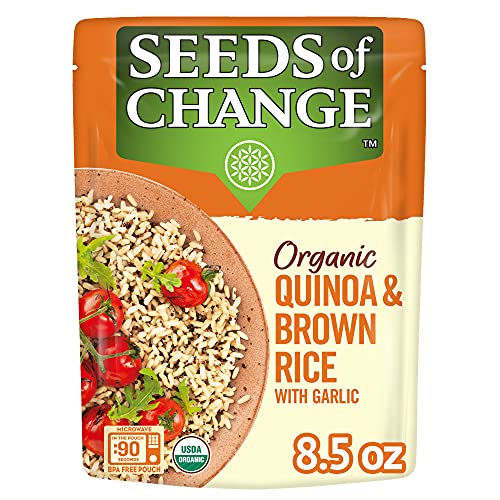 Double the grains, double the deliciousness! Seeds of Change makes all sorts of products like this with all different flavors. And all the ones that I’ve seen so far are vegan!

On its own, rice is 100% vegan as it’s just another grain. Depending on what type of rice you get, it can either be a whole grain (brown, black, red etc)or a refined grain (white). But either way, plain rice is vegan. Types of rice that fit in this category include…

You may notice some “weird” looking ingredients on some packages of white rice, but these are merely vitamin fortifications.

Yellow rice isn’t a type of rice on its own, but rather a rice recipe which usually includes turmeric (which makes it yellow), olive oil and some seasonings. Most of the time, yellow rice is vegan, but there may be some exceptions.

Yellow rice CAN be made with butter (a non-vegan dairy product), but this usually is not the case. If you’re unsure, it’s always best to ask.

Absolutely. Every rice paper brands I’ve ever seen was also 100% vegan.  Rice paper is usually a combination of rice flour and tapioca flour (starch from the cassava root).

According to their website, Zatarain’s Spanish Rice is completely vegan. There are no dairy or other animal products to be found.

Here’s the entire ingredient statement for your reference…

If you’re out at a restaurant and wondering if you should order the mango sticky rice, there’s a very 99% chance that it is vegan. Mango sticky rice is traditionally made with coconut milk (a non-dairy milk). If you’re unsure, it’s best to double check with your server, but I’ve never seen a mango sticky rice recipe that called for regular milk.

Pilau rice may or may not be vegan because it can be made with butter or oil. There are several different versions of the recipe, some using oil, butter, or ghee. If you’re at a restaurant or a get-together, your best bet is to ask how the rice was made.

Yes! Sushi rice is vegan. The traditional Japanese recipe calls for vinegar, sugar, salt, and rice. This also means that your veggie rolls are vegan too!

Rice pilaf usually isn’t vegan because it is made with chicken stock and butter. However, it is very easy to swap for veggie stock and only use oils in any rice pilaf recipe. To make things even tastier, you can use “chicken stock flavored” vegan stock mixes.

Depending on which brand of rice cheese you’re getting, it may or may not be vegan. For example, this rice-based cheese from Go Veggie has casein which is a dairy product. There may be other brands that are vegan, though.

To learn more, see our list of vegan cheese brands.

According to the Taco Bell website, their rice is certified vegan. Here are the ingredients for your reference…

Yes! According to their website, Mahatma Yellow Rice is vegan. Their ingredient statement (which is pasted below) does not contain any animal products. Yay Mahatma!

No, Goya Yellow Rice isn’t vegan. Their ingredient statement has chicken fat which is an animal product. It will be pasted below for your reference.

Yes! Rice Dream Milk is vegan. They even have a plant-based symbol on their website and openly advertise that they create plant-based beverages. Their drinks are delicious too!

Chinese Fried Rice from a random takeout place probably won’t be vegan. There are usually bits of pork in it and also may contain honey. There’s a small chance that they have a vegan version depending on the establishment, but it’s safe to assume that it’s not vegan.

Generally speaking, a homemade Spanish rice won’t be vegan because it will contain chicken stock and sometimes butter. However, it is completely possible to make it vegan (and taste just as good) and there are brands out there that make pre-made Spanish rice without any animal products.

Do note, that not all rice products from Knorr are vegan so be sure to check the label.

Is Take Out Rice Vegan?

In general, take out rice will be vegan if its simply plain white rice. However, if there are seasonings added (like a yellow or fried rice), it is always best to ask if they have meat or dairy products.

We’re assuming this since cholesterol only comes from animal products.

It’s probably best to ask when you go to a Moe’s, because it may vary by location since their ingredients aren’t listed.

Is The Rice at Del Taco Vegan?

The Fresca Lime Rice at Del Taco is NOT vegan. According to their website, they have Sodium Caseinate as part of the ingredient list, which is a dairy product.

Here are the ingredients…

Is the rice at Taco Bueno Vegan?

As of writing this, both the Mexican Rice and Cilantro Lime Rice at Taco Bueno are vegan. Neither have any labeled animal products, but the clinatro lime rice obviously has a much cleaner ingredient statement while the Mexican Rice has hydrogenated oil (not very healthy).

It’s impossible to know whether a given Halal Cart has vegan rice, but it’s safe to assume it’s not. Most recipes online that make Halal rice dishes use butter and/animal stocks to season the rice, so it’s safe to assume that most carts do as well. However, it is always worth asking just in case.

Microwave rice, also known as instant rice will usually be vegan if it is a plain product (like a white or brown rice). However, if it is a flavored rice, it is always best to double check the label for dairy products or animal fats/stocks because the ingredients can vary greatly from product to product.

Uncle Ben has a combination of rice products, some are vegan and some are not. If it’s plain (with no seasonings) then it’s probably vegan, but if not – it is always best to check.

There are hidden dairy products in places where you wouldn’t think they’d be like the Uncle Ben’s Teriyaki-Style rice. But then they have other products, such as their Jasmin Brown Rice and Edamame which are completely vegan.

When looking at Uncle Ben’s products, it’s best to check their labels carefully.

Rice cakes are usually vegan, but there are some exceptions. The plain varieties – like from Quaker only contain a few ingredients, none of which are from animals. However, some types of rice cakes may have cheese (there are cheddar flavors). These types of flavors aren’t vegan.

By itself, Arborio Rice is vegan, but cooking methods may add animal-stocks and/or dairy products if making a traditional risotto. Keep in mind, that these ingredients are easily swapped for plant-based ones to make a risotto that comes out just as good!

Saffron rice can be made in a wide variety of ways. Some of these ways are vegan and some aren’t. The more traditional ways use animal-based stocks and butter on occasion. These obviously aren’t vegan.

Swap out butter for oil and animal stocks for a plant-based stock and it’s just as delicious!

Panda Express White and Brown Rice are most likely vegan because they don’t contain any cholesterol according to their Nutrition Facts. However, the fried rice that Panda Express makes certainly contains animal products – namely eggs.

We’ve contacted Filberto’s Mexican food and found out that their rice is NOT vegan. We reached out on Facbeook and got the following response…

Hello! Thank you for your interest in Filiberto’s ®. Our Spanish Rice recipe does contain a small amount of chicken buillon, so it does not classify as vegan. While we cannot offer a vegan version of our rice at this time, we are always looking for ways to expand our menu offerings for all of our customers’ needs. Should you have any additional questions, don’t hesitate to contact us!
The Filiberto’s Team

That it! If you want to learn more about shopping and living as a vegan, be sure to check out our beginner’s grocery list. You’ll love it!