Do you prefer cream in your coffee? Are you concerned that your regular cup of Joe won’t be the same after being vegan? You’ll love our best vegan coffee creamer brands to buy (with gluten free options).

Here’s what you should expect to find…

Now onto the non-dairy coffee creamers…

First, here are some shelf-stable creamers. Even though they are shelf-stable, they should still be refrigerated after opening. 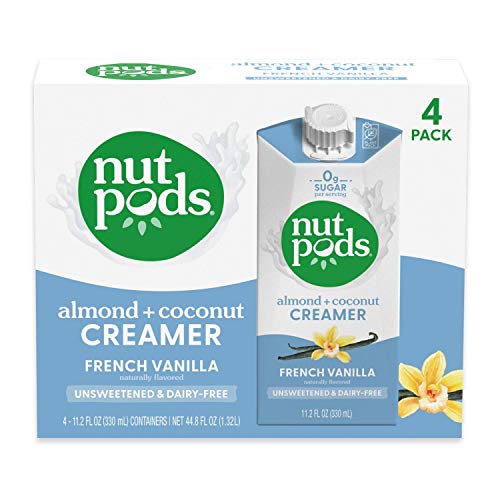 Nutpods are a completely vegan and gluten free coffee creamer option. The formula has a base of coconut cream and almonds with thickeners and emulsifiers (this isn’t a bad thing). The brand makes a variety of flavors such as:

All of the flavors at this point and time contain no added sugar – just creamy goodness. The cartons that it comes in are shelf-stable, so you can keep them outside the fridge until you open them. Once you start using it, you’ll have to keep them cool.

One of the coolest things about Nutpods is that they can also be used for cooking! You can use the original pods as a cream replacer in savory dishes such as plant-based mac and cheese, butternut squash soup, and gravies. The other flavors can be used in sweet baking recipes. They’re a great brand to check out! 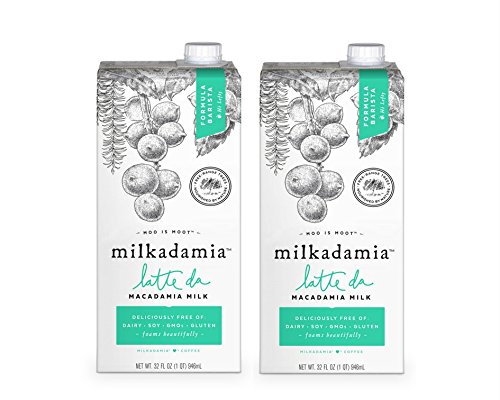 If you weren’t able to guess by the name, Milkadamia Latte De Barista is made from macadamia nuts. Their formula was designed specifically for coffee, hence why they put “latte” and “barista” right into the name. It’s designed to froth well and have a subtle flavor creamy mouth-feel.

Designed for cold brew and hot coffee, Some of the flavors that they make are:​

Some of the flavors are fortified with B12 which is awesome for vegans! Even though you should likely be supplementing, you don’t necessarily have to if you’re consuming products that are already pre-fortified.​

So Delicious has their own line of coconut milk creamers. They make a shelf-stable variety which is linked below as well as one that’s easy to find in most refrigerator sections by the dairy-based coffee creamers. According to their website, they’ve removed the carrageenan and titanium dioxide which many customers complained about.

It’s also free of gluten, soy, and all of the other major food allergens. The only allergen it contains is coconut (at the time of writing this), but that should be pretty clear from the packaging!

The original and French Vanilla variety of the Barista Style both contain added sugar in the form of dried cane syrup, but it only comes out to 1g per tablespoon.

If you’re into frothing, you may want to check this one out as it froths really nicely based on what we’ve seen!​ 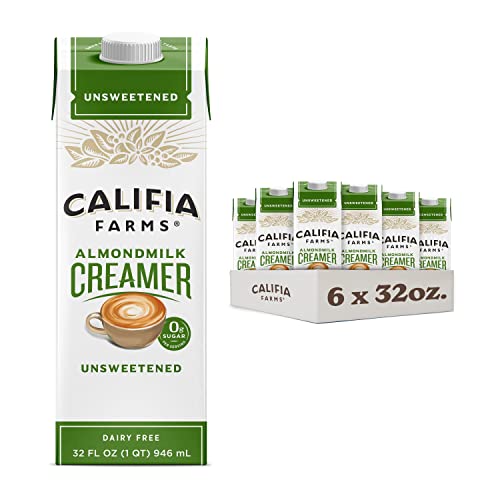 Califia Farms offers a shelf-stable and refrigerated variety. The company seems to be getting more and more distribution to the big box stores and we’re started to notice them in our local Weiss markets. The bulk of their products are coconut and almond milk creamers.

The shelf-stable varieties are made in the following flavors:

Both their refrigerated products and shelf-stable products are rich and creamy milk alternatives.

If you’re looking to make latte art, the Barista Blend is probably your best bet. It’s got a higher fat content and is designed to be ideal for steaming and foaming.

Additionally, they offer yet another product called Better Half. As the name implies, Better Half is designed to be a vegan alternative to half and half. We haven’t seen it in our local stores yet, but it is available on Amazon. It’s also made in some of the same flavors as the creamer: Hazlenut, Original, Vanilla, and Unsweetened 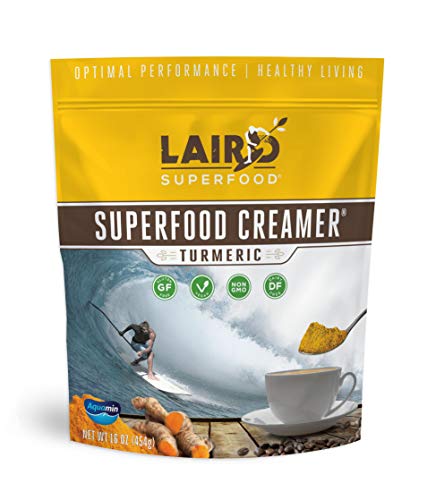 Laird Superfood creamer powder is the only dairy alternative on this list that’s not actually a liquid. Rather than pouring it into your coffee, you simply take it out of the pouch by the teaspoon (2 is recommended for a regular sized cup of Joe).

If you hadn’t noticed from the picture, Laird isn’t scared to put out some unconventional creamer flavors. Rather than stick with the conventional Hazlenut and Vanilla, they’ve put out some really interesting ones such as Cacao and Turmeric.

They even make an instant coffee plus creamer, which is something we’ve never seen before! Rather than making your coffee an adding the powdered creamer to it, you just add the powder to 6oz of hot water, mix and voila! You’ve got a cup of creamed coffee ready to drink! This product is aptly named Instafuel.

Although coconut cream isn’t exactly designed to be a coffee creamer, you can still absolutely try it! Unlike the specially formulated products, you’re likely to notice more of a coconut cream taste in your coffee. This could be a good or a bad thing depending on your preferences.

Pure coconut cream is also going to have a high fat content. A little bit goes a long way when it comes to lightening your coffee. This product we featured by AROY-D comes in a carton rather than a can (typical of other coconut creams) which makes it ideal for pouring it into a cup.

If you’re adding it to coffee, you may need to mix rapidly to get things emulsified because it is so dense.

When you’re the refrigerator section of your grocery store, head over to the case where they have the regular creamers. Odds are, you’re going to find a bunch of non-dairy ones as well. Here are some of the brands to keep an eye out for…

Available in the dairy section at trader Joe’s you should be able to find their own brand of coconut creamer. Listed on their website, they have the original coconut creamer in their archive. Last time we were at Trade Joe’s we did notice a coconut creamer, but it may have been in a different packaging. Because they’re always changing up their selection, we hope that it is still available, but its likely that they still have one or more creamer options.

Wildwood Organics, who specializes in soy-based products makes a very popular soymilk creamer. It’s formulated to blend smoothly into coffee with a texture as thick and rich as regular half and half. If you check the “Where to Buy” section on their website (linked above), you’ll see that its quite limited in its distribution. However, if you happen to have one of those stores near you, it’s worth giving it a try!

As we mentioned earlier, So Delicious has a shelf-stable as well as a refrigerated version of their vegan coffee creamers. They are likely one of the brands that you’ll see in the big box grocery stores. If our memory serves us correctly, we’ve even spotted their non-dairy creamers in certain Walmart stores.

As you might expect from possibly the biggest nut milk company, they also have a line of refrigerated coffee creamers. Personally, we think their unsweetened soy milk works just as well as the creamers. However, if you’re into flavored coffee or light and sweet, then you might like the caramel almond or the pumpkin spice almond.

Everyone has heard of Coffee-Mate. They’ve been at the forefront of coffee creamers before many of us were even drinking coffee. Well, they’ve recognized the demand in the non-dairy market and have finally put out their very own. Branded under their Natural Bliss product line, you can find their almond-based and coconut-based creamers.

My favorite thing to put in coffee is plain unsweetened soy milk. I find that it is the closest thing to 2% milk which is what I preferred in my coffee before being vegan. If I’m going to make something extra special, I might opt for one of the creamers above. Most likely the nut pods as I don’t really like sweet coffee. 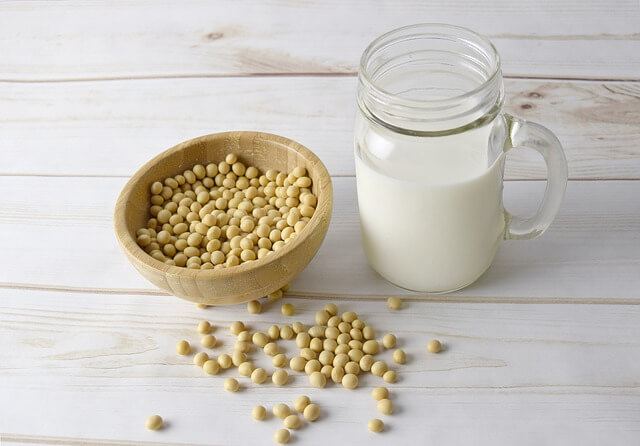 When you’re looking at the mainstream nut milk brands there are a few guidelines that we’ve created:

Soy Milk for 2% or Whole Milk

If you look at the protein and fat content of regular silk unsweetened soy milk, you’ll see that it has quite a bit of both when compared to most mainstream almond milks. This is because those almond milks tend to be more watered down than soy milk. In other words, you’re getting less almonds per carton of liquid compared to the amount of soybeans.

That’s why we recommend using soy milk to replace higher fat dairy milks in coffee. Note, that if you’re moving more towards whole milk, you might be better off with one of the creamers we listed above.

In our experience, regular store bought cashew milk is still pretty creamy in coffee, just not as much as soy milk. It about the same amount of fat as almond milk, but we’ve found it to be slightly creamier when used in coffee.

Being that unsweetened almond milks tend to have the lightest texture and flavor profile of other nut milks, we think that it’s the most similar to using skim.

Making Your Own Creamers

If you’re DIY inclined then it’s only natural that you’ll want to make your own vegan coffee creamers in the comfort of your own home. It comes with the advantage of having the ability to fully customize what you’re doing and will probably save you some money if you get your ingredients in bulk.

In this video, one of our favorite vegan YouTubers, Candice from the EdgyVeg shows you how to make vegan coffee creamer. You’ll need a blender with some power behind it as well as a nut milk bag or fine mesh strainer.

We’ve personally tried this one and it’s great, which is why we wanted to give her props! Her other recipes are great too!

In this next recipe, Kim Constable makes a vegan coffee creamer that’s almond based. It’s a bit less whole food based than the one above, but has very positive feedback. We haven’t tried this one yet but thought it was worth including for you to check out.

She also gives some valuable tips that apply any time you’re making a nut milk at home. That is, more nuts and less water gives you a thicker cream and vice-versa.

By this time, you’ve probably realized that there are a ton of options for those who don’t want to consume dairy. In fact, all the options might make dairy milk seem a bit boring!