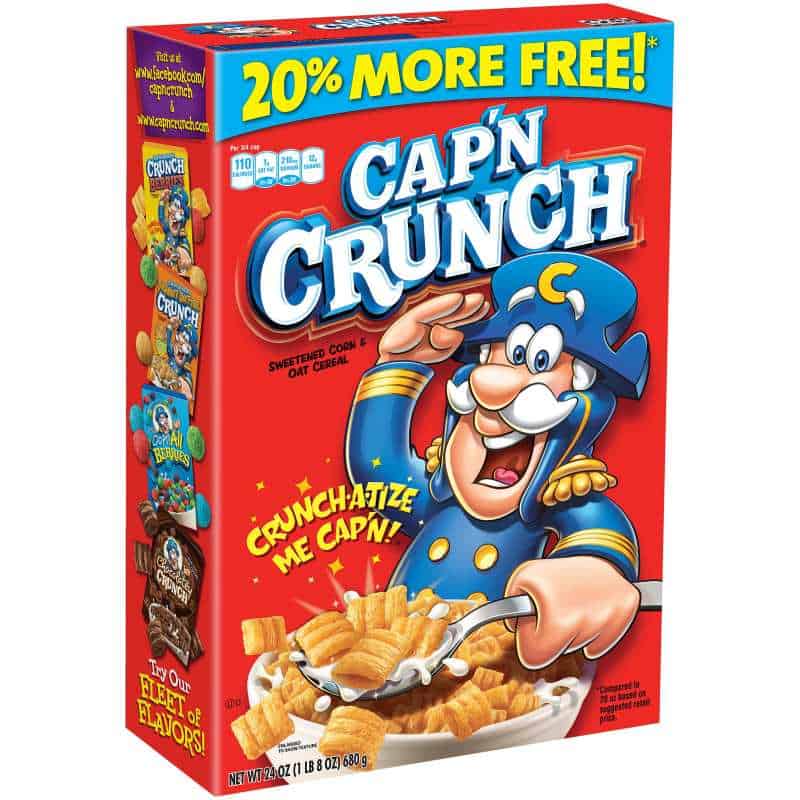 Verdict:Most Captain Crunch flavors are vegan, but you should beware of several ingredients within this cereal that are controversial.

In order to learn more, let’s start with what veganism actually is and then get into some of the ingredients.

If you already think you know what it is, keep reading anyway because it will set the context for the rest of this article.

According to the most universally accepted definitions of veganism taken from the Vegan Society, being vegan means that you are looking to avoid partaking in all forms of animal cruelty and exploitation as far as possible and practicable.

In other words, you’re doing whatever you can to not contribute to animal suffering through your purchases of food, clothing and other goods.

But the hard truth is that consuming anything causes some form of suffering.That’s why the aim is on reduction and not full elimination.

I believe this context is crucial when deciding which foods are vegan and which aren’t.

In order to be most effective at reducing animal suffering, we should focus on not consuming labeled animal products and over-analyzing every ingredient and the entire food supply chain.

By keeping it simple, veganism becomes easy to understand and accessible for more people.

Here are the ingredients in the original Captain Crunch…

As you can see, there are no blatantly labeled animal products that stick out which is why we’d consider it avegan cereal(see that link for many more breakfast options).

There lies the potential for the sugar in Captain Crunch to be processed with bone char.But no one really knows if it is.It’s just a common practice among sugar producers.

That said, avoiding this cereal for such a reason doesn’t send any signals to the food industry to stop producing animal products.The harm that buying the sugar in Captain Crunch contributes to animal suffering isn’t something that can be quantified or measured in a meaningful way.

In other words, don’t stress about it for ethical reasons.Health reasons are a whole different issue.

To learn more about sugar, also see –Is Sugar Vegan?

More on Palm and/or Coconut Oil

Palm oil gets a lot of bad press for causing deforestation and destroying the homes of orangutans. And it’s true, it’s a mass produced commodity and that mere fact means that it must cause harm at some level.

But in the context of this cereal, should you avoid it simply because it contains palm oil?

I don’t think that’s necessary. Especially if you’re new to veganism or finding it to be overwhelming to begin with. Don’t overwhelm yourself with details like this, when giving up all labeled animal products will have far more impact than most other things you can do.

Also keep in mind that many derivatives  of palm oil can be found in everyday products and don’t even have to be labeled.

The majority of deforestation is the result of animal agriculture so giving up all labeled animal products is going to have the biggest impact with the least amount of confusion.

While artificial colors may have been tested on animals at one point or another, I don’t believe it makes sense to abstain from them today. It doesn’t send any signals to the food supply chain to stop producing animal products.

Again, all products (even 100% plant foods) cause some level of harm to animals, insects or the environment. As vegans, we must take a hard stance against labeled animal products, but also be practical.

Finally, the Yellow 5 and Yellow 6 colors in Captain Crunch are synthetic and don’t have animals in the ingredients. You can read about the origins on the FDA website.

The health implications of artificial colors are a whole different issue, but a separate one from veganism and ethical food choices.

Around here, we’re all about keeping veganism simple and easy to understand which is why we classified Captain Crunch the way that we did.

Now of course, we’re not recommending you eat it for health reasons, but for ethics there really isn’t a strong enough reason to avoid it.