Amsterdam is one of my favorite cities in the whole wide world and I was fortunate enough to be able to visit in 2017.It was my second time visiting, and my first time as a vegan.Before making the journey out, I saw sites like HappyCow touting a lot of options for plant-based travelers.

However, it wasn’t until I got there that I got to experience how much delicious food the city had to offer.I was blown away multiple times over by the selection of healthier fare and vegan junk food.

Here are all of the best restaurants and food that I tried in Amsterdam.  If you ever get a chance to go visit, I would highly recommend you hit as many of these spots as you can.

Spirit was the first place we went after landing.We got to the city rather late and it was one of the few places that was open past 9 or 10 pm.It’s a vegetarian buffet style restaurant with countless vegan options.Even most of the ice cream was vegan.

When I say buffet, I don’t mean that it was a flat fee followed by an all-you-can-eat.Instead, you got your food and paid by weight.This was probably a good thing because the food was so good that I think I could have kept eating forever.

Here’s some of the stuff that we ate: 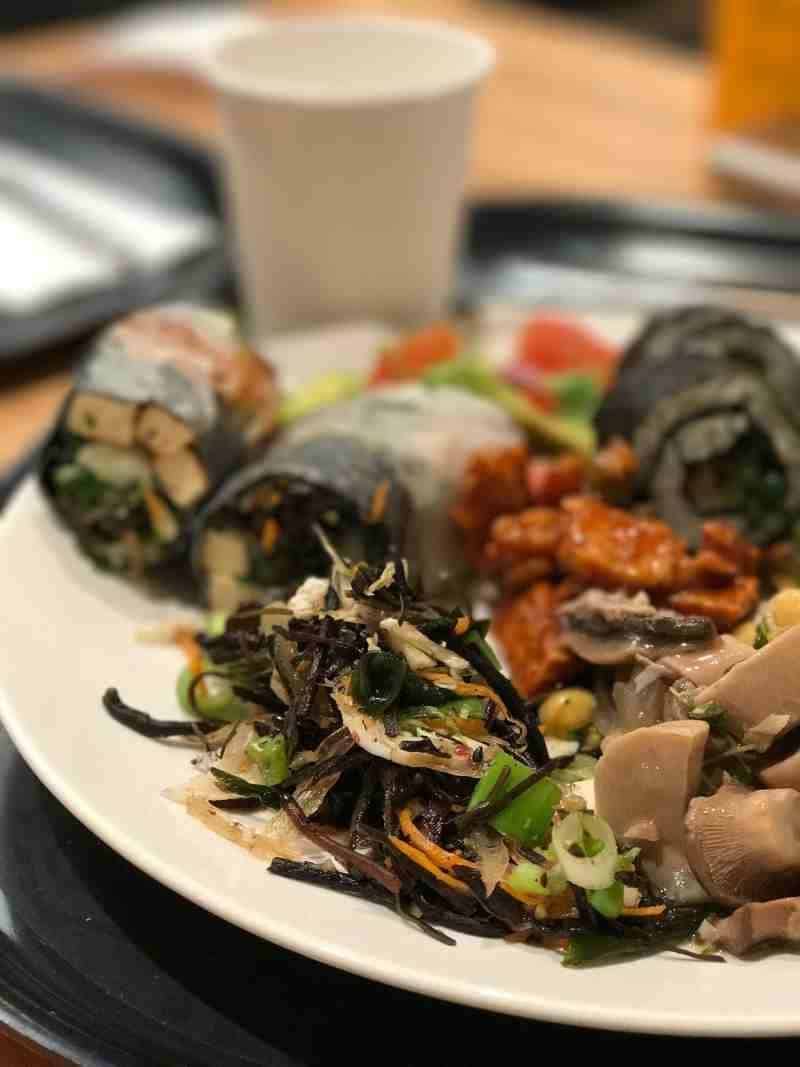 The photo above is one of the first plates that we had from Spirit.It’s got all sorts of Asian delights like seaweed, mushrooms, tofu spring rolls, and spicy tempeh. 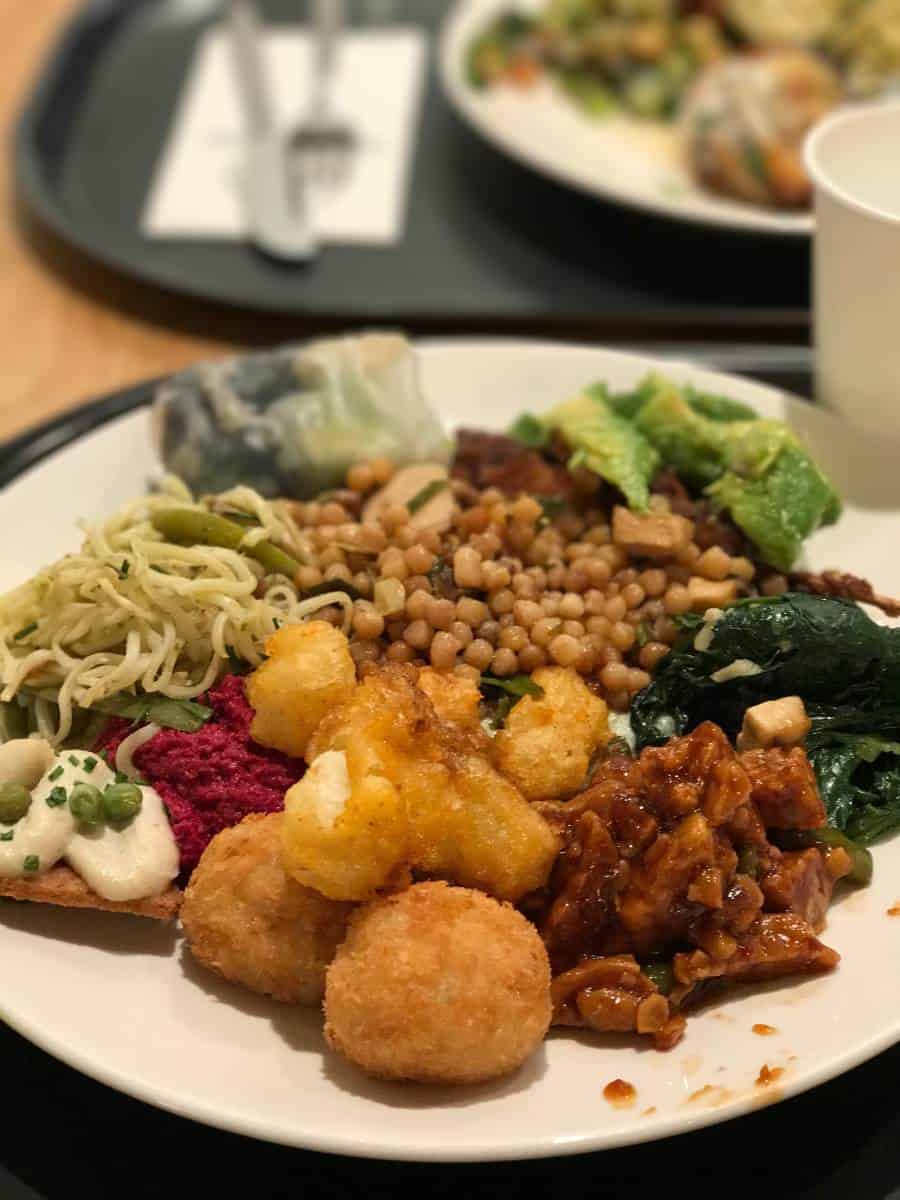 There’s so much stuff on the plate that it’s kind of hard to tell what everything is, but the main thing is the fried risotto balls.They were to die for.That cracker with the creamy looking spread on the top was actually a pastry – kind of similar to an open-faced cannoli. 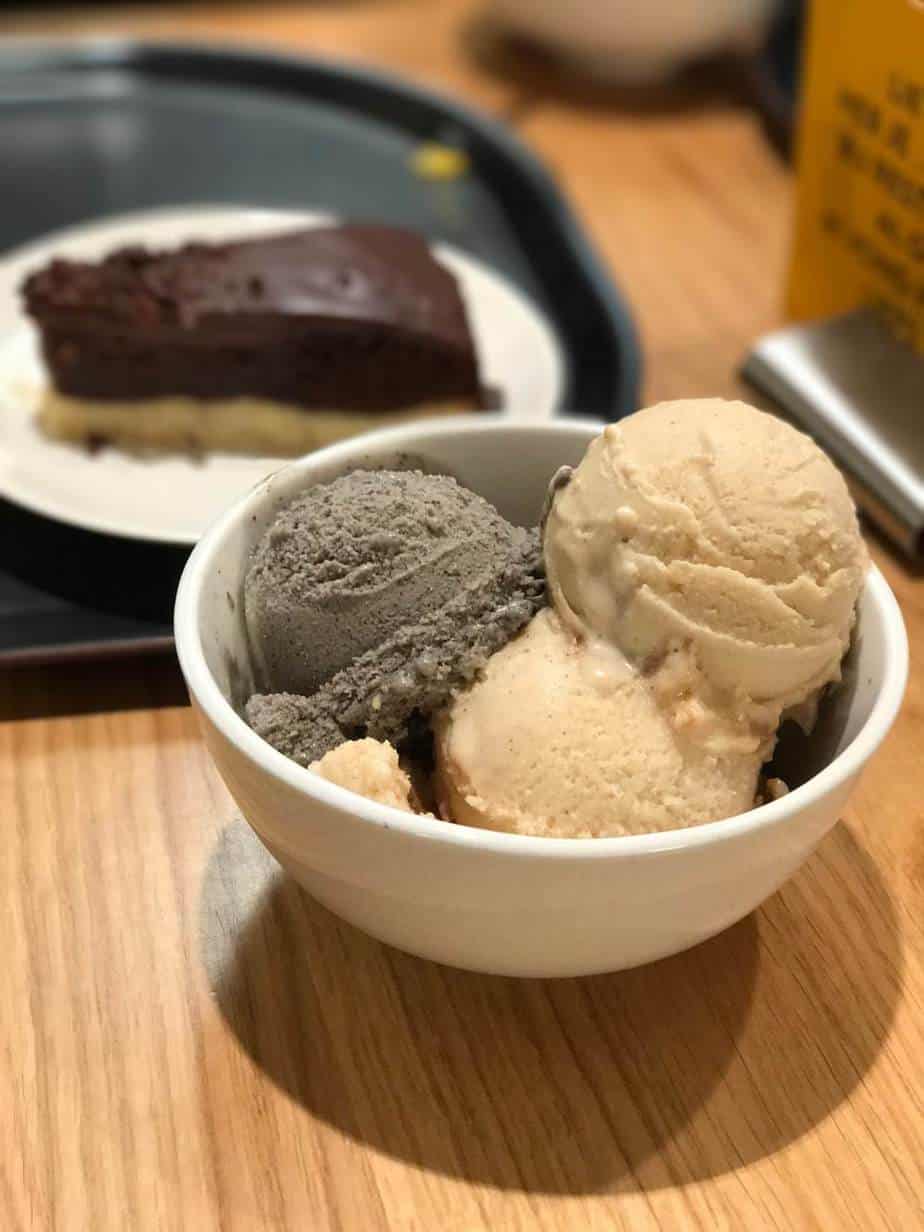 Even though it was a vegetarian buffet – most of the desserts that I recall were 100% vegan.This includes the ice cream selection.What you see in the picture above is a black sesame ice cream along with cookie dough ice cream (don’t quote me on that – it may have been vanilla).

If you like tofu and if you’re the type of person who’d rather cook at home, check out any one of our top five picks for best tofu press. Pressing off excess moisture from tofu not only makes the texture more awesome but it also enhances the flavor.

The Avocado Showhad a really long wait, but was worth every minute.While I felt the portions were small, everything was extremely well crafted and totally Instagram-worthy. 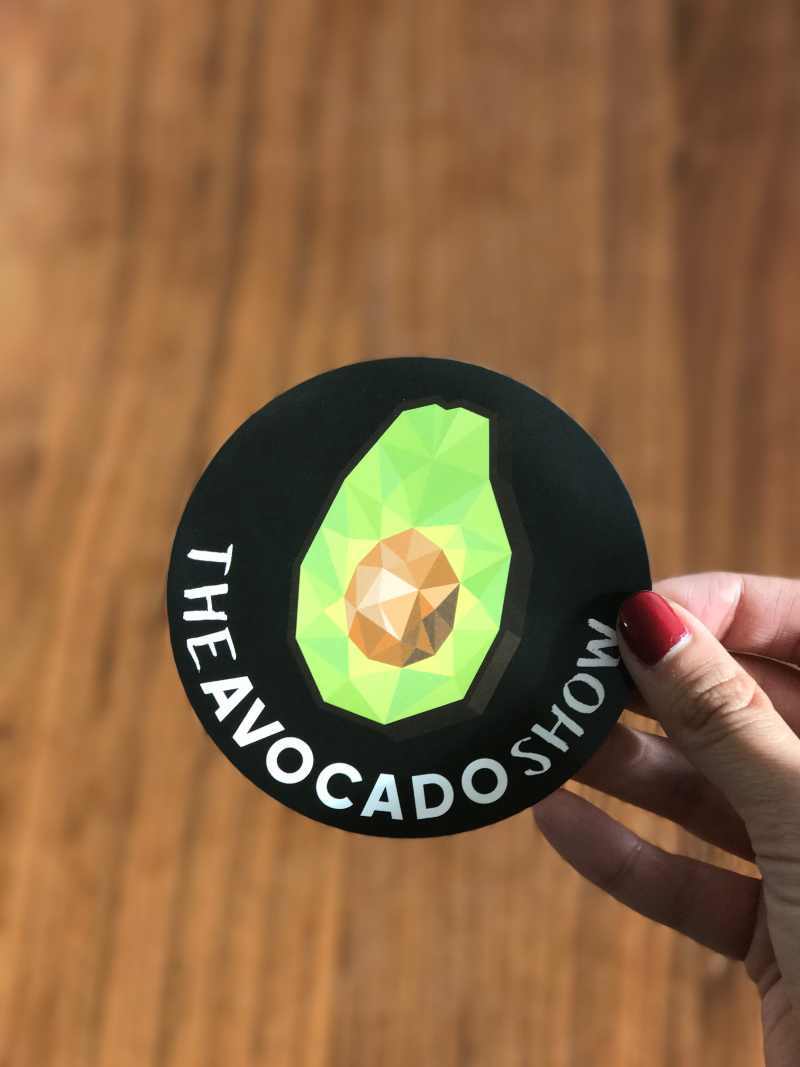 I ended up putting this sticker on my computer tower. I get fond memories whenever I look at it. But now onto the food. 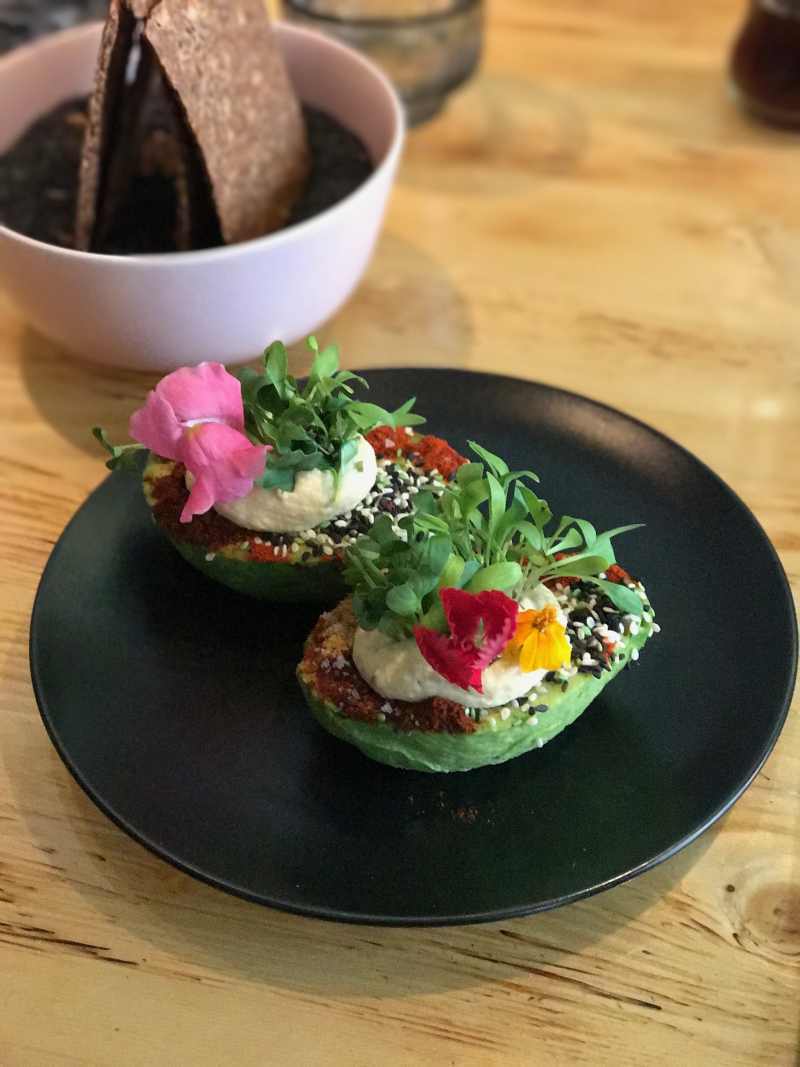 The above is a picture of the “Avogarden”. It was basically an avocado stuffed with hummus and a bunch of other goodies. Even the flowers were edible. In the background, you can see some of the delicious crackers that it came with. 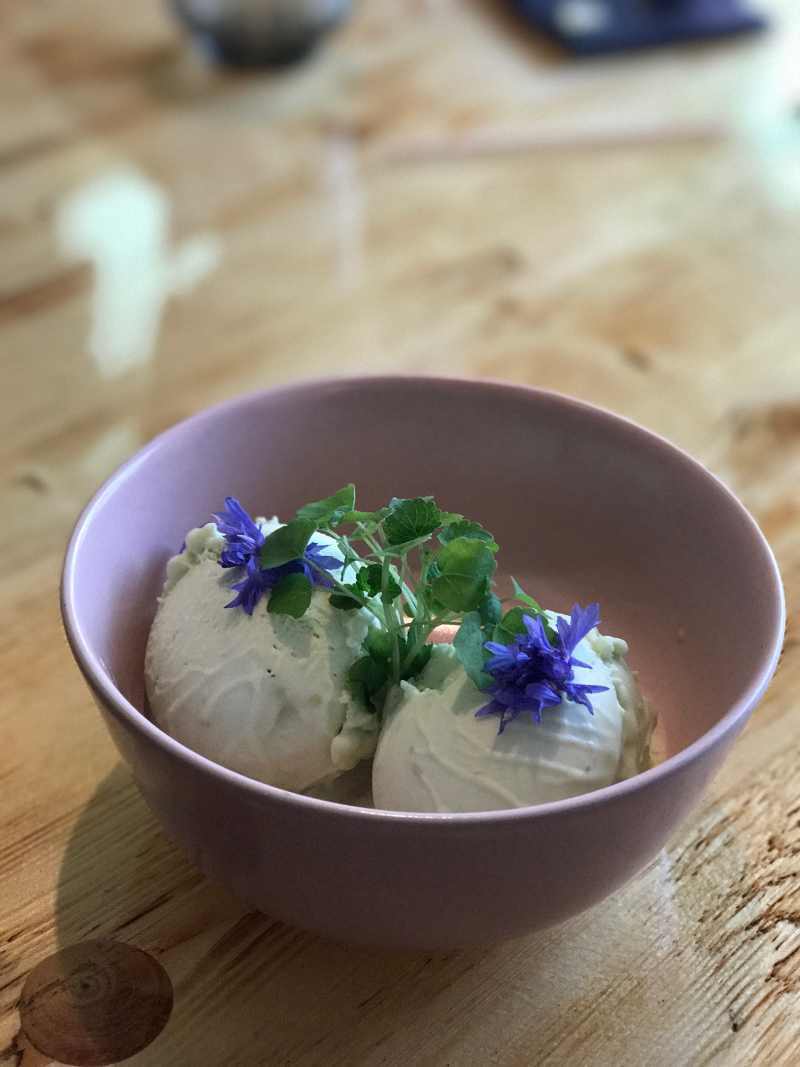 Of course, I cant forget about the avocado ice cream.Words can’t even describe how good this was.I’m not sure what I liked better – this or the sesame ice cream from Spirit.

Vegan Junk Food Bar had the most over the top vegan food I’ve ever tasted.  To be more specific, the food was extremely rich, indulgent, and delicious.As the name implies – this isn’t meant to be particularly healthy.It’s burgers, fries, onion rings, bitterballen, shawarma, and much more. 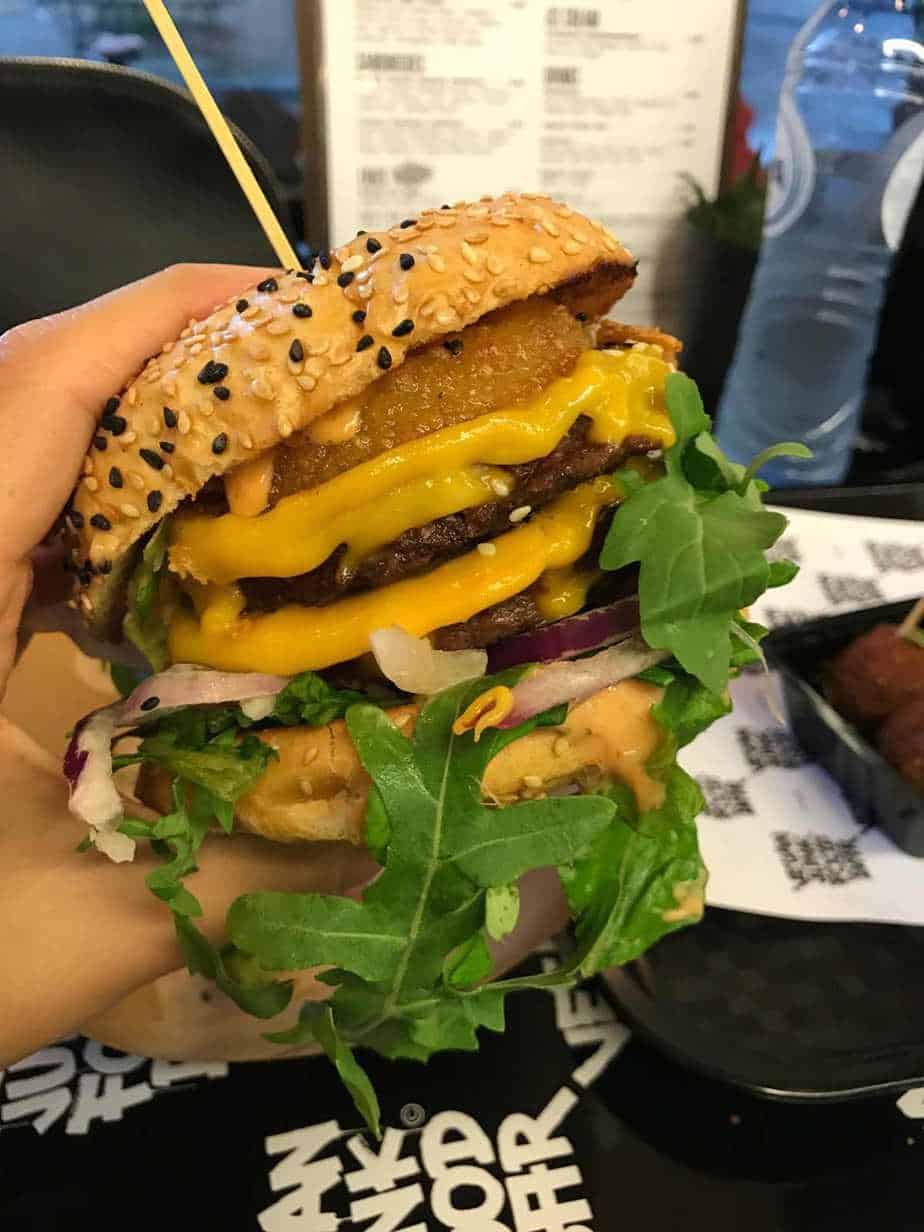 Aside from the few sprigs of arugula, you can tell that this burger wasn’t designed with clean eating in mind. That being said, it went far beyond any burger (real or mock meat) that I’ve ever eaten. I don’t think I could eat here all the time, but if you’re in the city, it’s worth checking out. 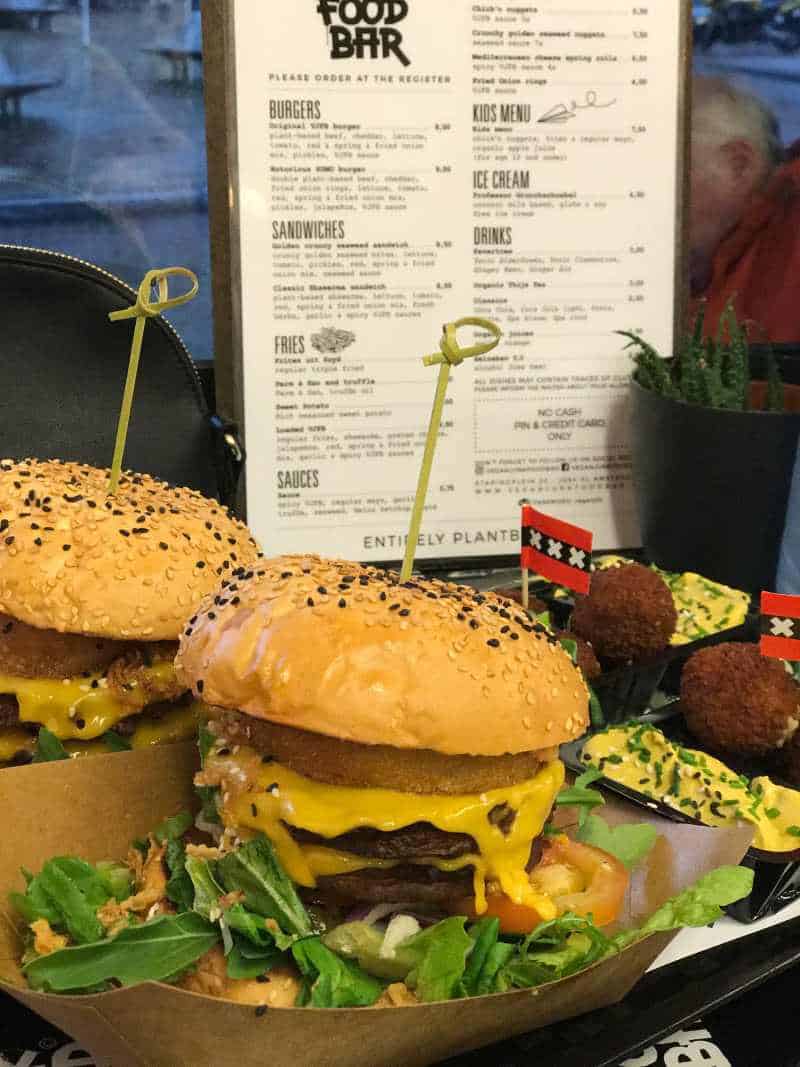 This is a shot with the bitterballen on the side. I never really heard of it before taking the trip, but it was amazing!

Vegabond was a nice little cafe , located around the center of the city, that had all sorts of treats. They had lots of different things, including a few vegan groceries that we bought.

The main thing were the delicious vegan donuts, though. The first one we tried was the peanut butter flavored one: 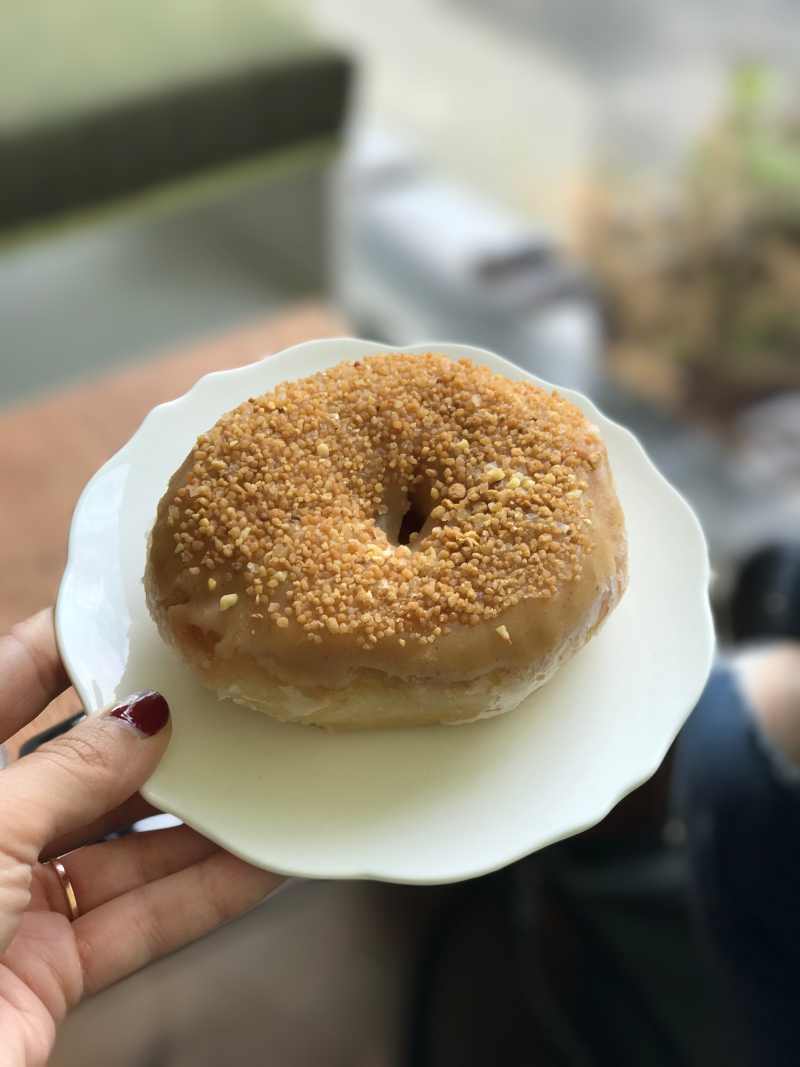 The second one was this chocolate one. Absolutely amazing. 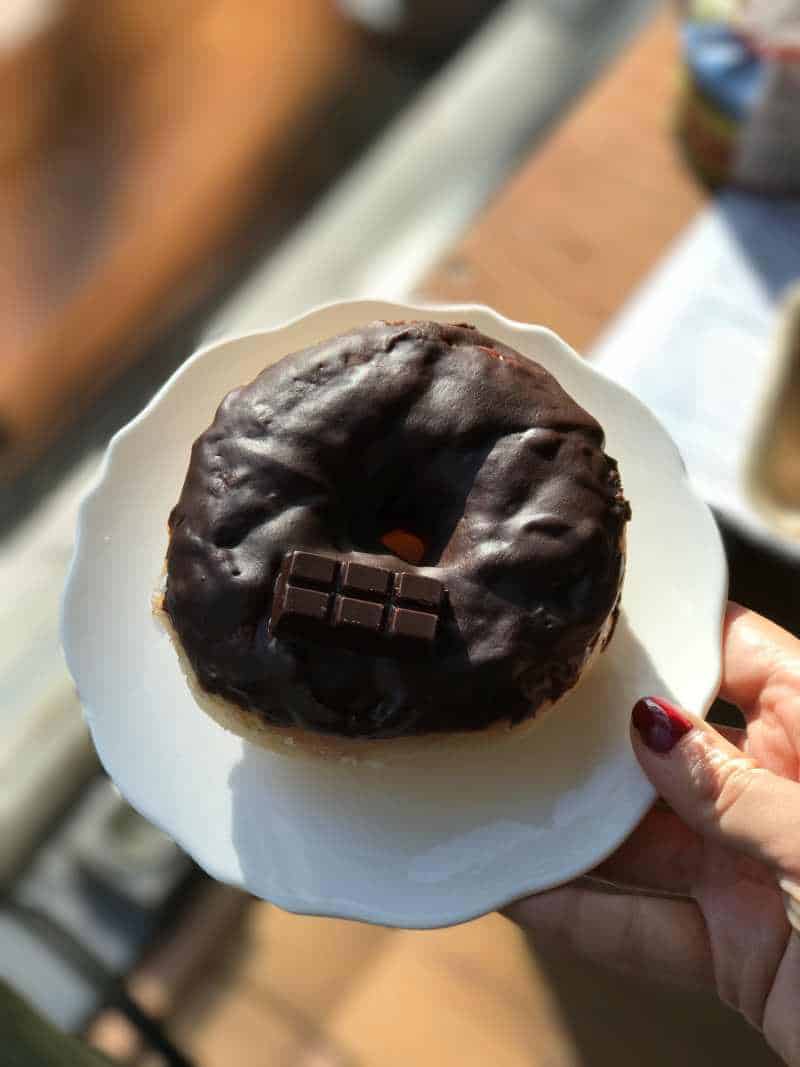 Eetcafe Ibisisn’t a vegan restaurant, but they were more than happy to serve up an entirely vegan feast to us.Ethiopian cuisine is pretty heavily plant focused anyway, with an emphasis on legume dishes.When we said we were vegan, the staff knew exactly what to do and we didn’t have to ask any questions or have any awkward conversations.

Everything was extremely well-seasoned and the manager even came out to greet us.It was clear that they took great pride in their cuisine and it really showed. 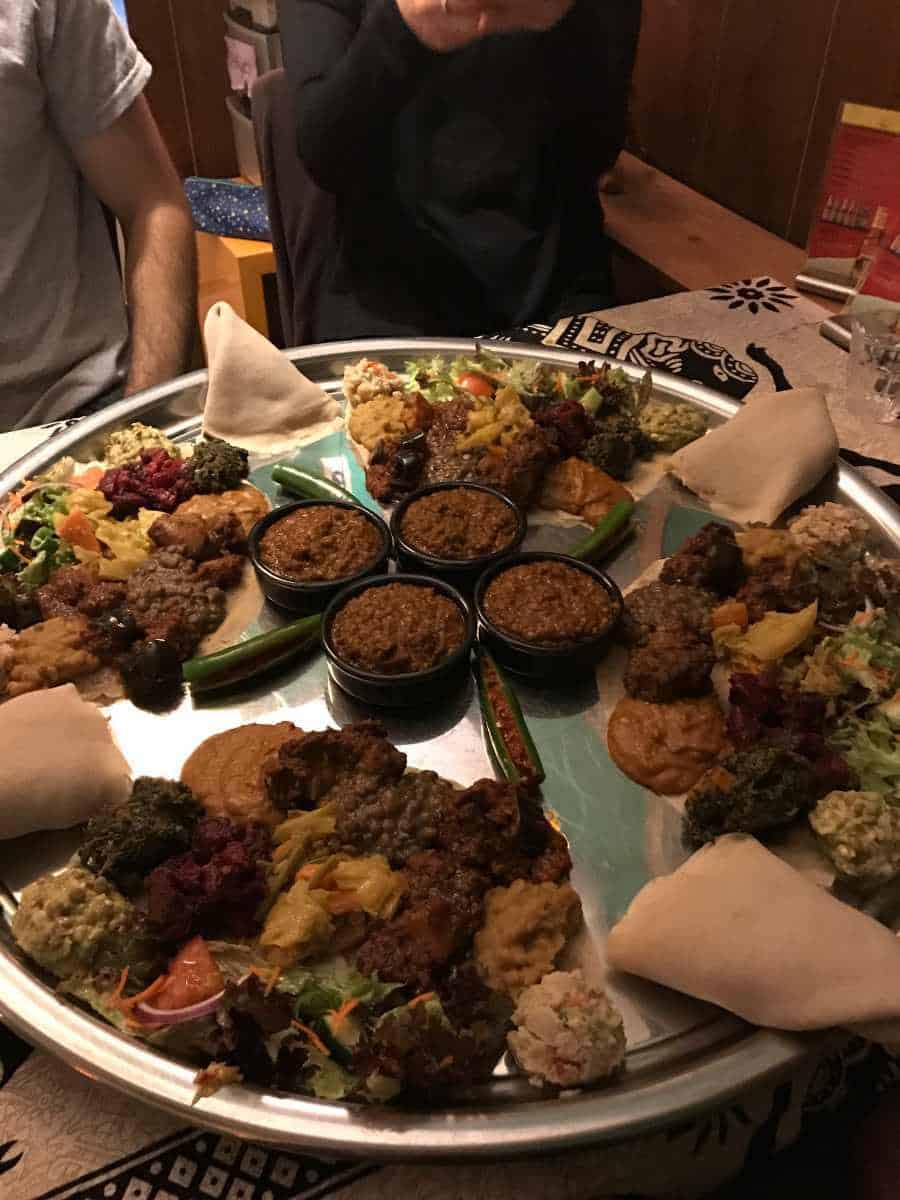 I’ve been to about 5 different Ethiopian restaurants in my life, and this one was my favorite by far.

The plate pictured above was shared by four people. As you can tell it was absolutely huge.

And they weren’t stingy with the injera either (the wraps that you eat with shown in the photo). They just kept bringing it out without us asking.

I know what you’re thinking.Amsterdam.Weed.

But the Dutch Weed Burger doesn’t contain the type of weed you may have in mind. They serve up a delicious burger with seaweed along with a bunch of other mock meat dishes. 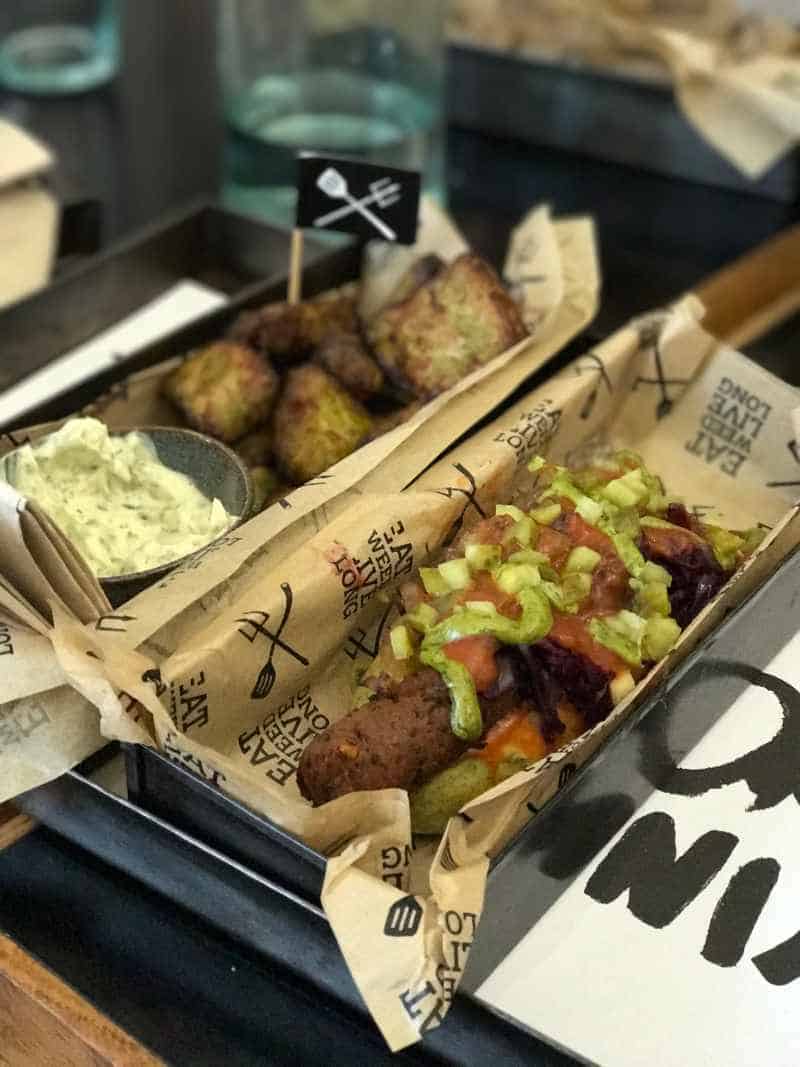 Here’s a picture of their vegan hot dog with the dutch weed bites on the side.My wife got the hot dog and I got the burger.I’m not sure which one was better.

If you enjoy “dirtier” vegan food – this place is for you.You’ll definitely want to go here and Vegan Junk Food Bar.

Out of all the restaurants, Beter and Leuk was the place that we went to the most. They’re a breakfast and lunch place with a wide variety of different options for each. 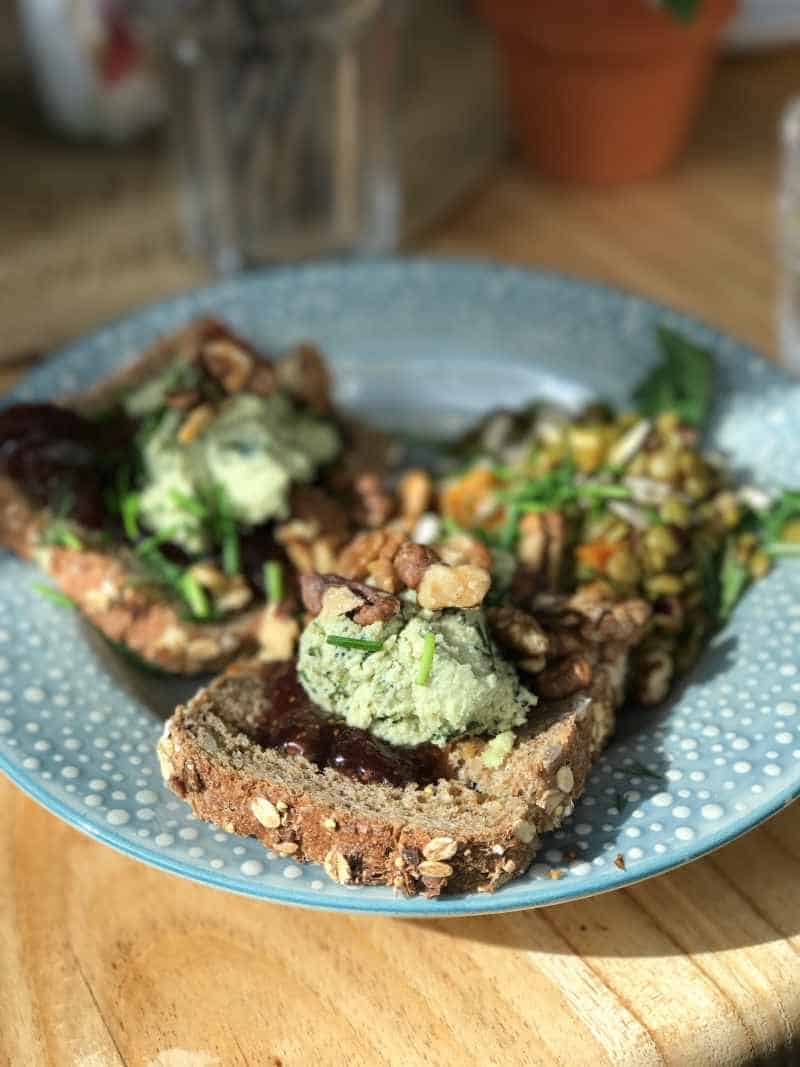 The above is toast with vegan cheese and jam.It was really filling and I ended up making it a whole bunch at home. 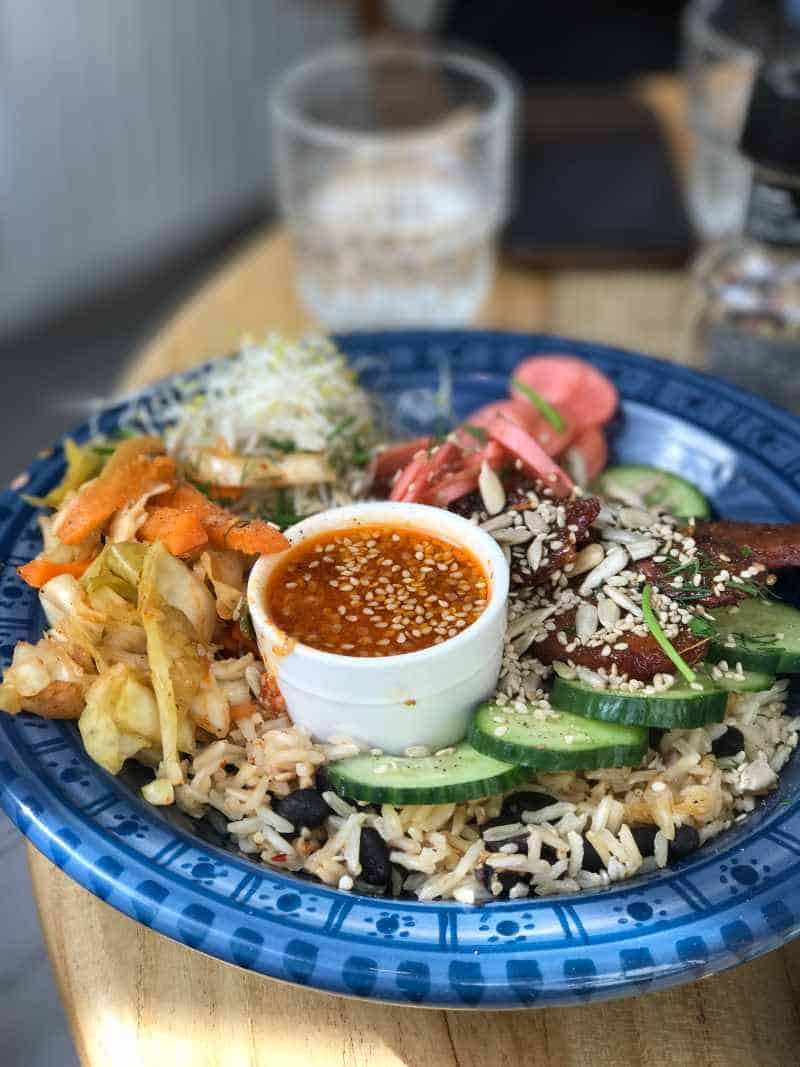 On the opposite end of the culinary spectrum, they also served up this Korean bowl. It had braised vegan short ribs and a bunch of veggies. Having worked in a Korean restaurant, I wasn’t expecting it to be as good as it was.

But the Dutch impressed me yet again.

Mr. and Mrs. Wastonwas a place that we wished we could have gone twice, but it was really crowded.They specialize in vegan cheese, but unfortunately I didn’t get a chance to try it because we just went for a light breakfast. 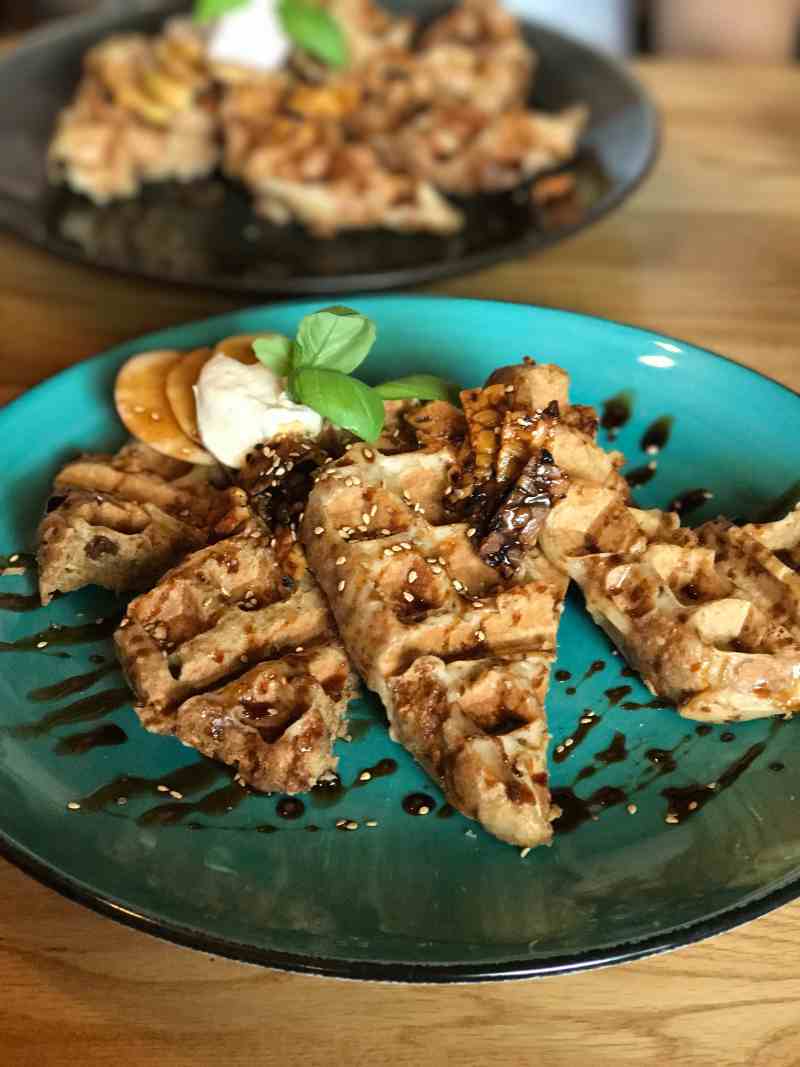 The waffles and tempeh bacon (pictured above) were light and delicious.I thought the sesame seeds were an excellent savory touch.

Hope you’ve enjoyed!I’ll be sure to keep this page updated as I plan on visiting again sometime in 2019.Hopefully it will be a long trip because I’d like to hit all these spots again.

Please comment below to let me know your favorite place to eat vegan in Amsterdam.