Berries are delicious, versatile, and – yes – a superfood that belong on your weekly grocery list.

As well as containing an abundance of important vitamins and minerals, berries contain some truly special properties that can help protect you against a whole host of diseases and even improve your recovery from exercise.

In this guide, you'll learn all the "juicy" details about the benefits of berries and see what berries have been shown to do in the scientific literature.

Why Are Berries Good For You?

Low in Calories and High in Nutrients

Berries are a perfect example of what one might refer to as a "nutrient dense food". Unlike something like a candy bar which is high in calories per weight and low in nutrients, berries have the opposite classification. They are extremely low in calories and high in certain vitamins, minerals, and fiber. They provide nutrients that are essential to your well-being, even if you don't consume that many (although we do recommend consuming them daily)! 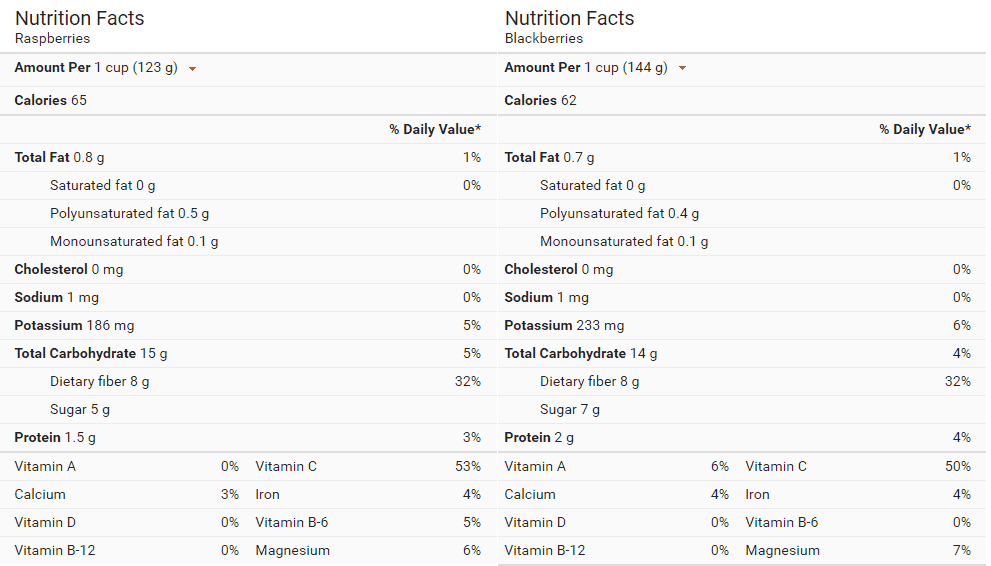 Nutrition Facts or Raspberries and Blackberries

Berries are High in Antioxidants

Antioxidants are a wide range of foods that are categorized by a common behavior:  they prevent the build-up of reactive oxygen species (ROS), such as free radicals, which otherwise go on to damage DNA membranes and proteins. This cell damage can then promote aging, disease, and cell death.

Theoretically, the more antioxidants you consume, the higher your chance of avoiding cell damage and circumventing the problems that can spring from it, such as cancers.

There is also evidence that antioxidants can modulate gene expression to increase cellular stress defenses, which means that antioxidants can help cells recover from past damage. When people were put on an antioxidant-heavy diet they successfully regulated 25 more genes against damage than the control group, a statistically significant result.

In other words, consuming more antioxidants seems to protect your cells from damage as well as enabling them to recover from exercise. (1)

A number of foods contain antioxidants, but berries are the frontrunner. They sail ahead in antioxidant content compared to other fruits – blackberries, for instance, have 25x more antioxidants per cup than bananas.

Berries are Rich in Phytonutrients

Berries are also rich in phytonutrients – which are natural chemicals found in plant foods which have proven themselves to have massive benefits.

Most people talk about micronutrients, macronutrients, and minerals, but very rarely are phytonutrients discussed. In fact, you may have not even heard of them. The word "Phyto" which is greek for plant implies that these chemicals can only be found in plant foods (2).  This means you won't be getting them in any kind of animal products.

​So many phytonutrients have been discovered that it would be impossible to list them all.

It is important to note that different kinds of phytonutrients are associated with the color of the food as they are responsible for providing pigmentation.​

One phytonutrient that you may have heard of is lycopene because it is often times advertised by ketchup companies as a benefit to their condiment. Be warned, though - when you consume food products outside of their whole plant form there is a good chance their benefits have been at least partially compromised. You're also usually consuming a lot of baggage such as excess sugar and fats as well with these types of processed foods.

Lycopene is responsible for giving a red color to tomatoes, watermelon, and pink grapefruit and has been linked to l﻿﻿oweri﻿ng the risk ﻿﻿for developing prostate cancer. (2)

Berries have a unique combination of phytonutrients with specific benefits. We will discuss  these benefits in depth in the studies section below.

Berries are High in Fiber

We all know that fiber is an important element of your diet – but why?

Apart from helping to promote bowel health by preventing constipation (3) and overparticular disease, fiber is being shown to be a critical aspects to overall health and wellness.

It has been linked to a whole ﻿host of benefits (4) including: reduced cholesterol and blood sugar levels, as well as lowered rates of cardiovascular disease, type 2 diabetes, colorectal cancer, breast cancer, and even all-cause mortality.

In addition, there are strong developments being released about fiber intake and gut bacteria. Considering that humans evolved eating a high fiber diet (5) (despite modern-day popular misconceptions), this makes complete sense.

Depriving your gut bacteria of fiber can have severe consequences such as:

BONUS: Want to learn more about what real "paleo" diets were like and the importance of fiber? Check out the video below...

The GBD study also known as the Global Burden of Disease Study is a full review of all causes of mortality across the globe. Not surprisingly, they found that the United State's biggest killer was our dietary habits.

Having a diet low in fruit was one of the major contributing factor to this conclusion. They estimated that if Americans turned around and started to meet their daily recommendations of fruits and vegetables over 127,000 lives would be﻿﻿﻿ ﻿﻿﻿spared and $17,000,000,000 in annual medical costs would be saved.

This all has to do with the platelets in our blood. Even though they are normally harmless, platelets can become activated which can cause inflammation and thus harm to our arterial walls leading to atherosclerosis.

Strawberries have shown in an antiplatlet effect​ both in a culture dish and in human tests.

Scientists gave subjects a daily pint of strawberries for an entire month ​and saw a statistically significant drop of circulating activated platelets. Other berries were shown to have a positive effect as well.

The video below does a great job of explaining this in a way that text may fall short.

In 2012, the Natural ﻿﻿Standards Research Collaboration (7) published a comprehensive study review on acai berries based on previously conducted research by other scientists. Their review resulted in several findings, some interesting and surprising while some to be expected:

Check out the video below to learn more...

Pesticide exposure is recognized as a major risk factor for Parkinson's. This can occur on a job site or by living in communities where high levels of spraying occurs. It can even occur in your own home if you're using household pesticides.

DNA mutations caused by pesticides can result in misfolded proteins which is one of the main contributors to neuro-degenerative diseases such as Parkinson's.

Pesticides are so effective at this, that they are even used in a lab setting to give lab animals Parkinson's Disease.

Flavinoids have been shown to protect against these harmful proteins in a lab.

There is also one promising human study to date where high intakes of berries (and apples for men) was associated with a significantly lower Parkinson's disease risk.​

The video below shows an interactive journey through these studies and per usual you can get the full list of cited sources through the reference.

Berries vs. Pesticides for Parkinson's Disease (8)

Because petri dish studies showed that black raspberries inhibited the growth of cancer and pre-cancer cells, scientists decided to study the impact in humans.

They took people with pre-malignant oral lesions in their mouth and had them apply a black raspberry gel for 6 weeks. There were many cases of improvement and even some cases of complete regression of the lesions.

Scientists are even beginning to study loading tiny oral implants with black raspberry powder that perform a consistent release of phytonutrients over the course of a month.

Be warned though, these berries are more rare and expensive than your conventional berries, but these studies are still a testament to the power of berries. They are not blackberries!

The group who got the cherry juice not only reported less pain, but actually maintained more of their strength over the next 96 hours.

Who needs whey protein for recovery when you have cherries?

Full study citations available at the reference and video below.

Personally, I love to use my big blender to make a thick smoothie with raspberries, strawberries, spinach and a frozen banana after a tough workout. I can honestly vouch for the recovery benefits.

Want to make your own berry smoothies? Read our guide on the best acai bowl blenders.

Natural Killer Cells are a type of white blood cells known as lymphocytes, and they are one of the immune system's natural responses for fighting off cancer cells. However, following a long endurance exercise session (such as marathon running) your Natural Killer Cells are nearly cut in half. After regular servings of blueberries for 6 weeks, participants were able to maintain their Natural Killer Cells at normal levels. This is because their levels from blueberry consumption had increased by around double.

Another amazing performance from berries.

​Full study citations available at the link below the video.

Although you may have not heard of them, elderberries have actually been put to the test versus the flu in a randomized, double-blind, placebo-controlled study which is considered to be the “gold standard” when it comes to testing the efficacy of a treatment. These types of studies are usually expensive due to the amount of rigor and therefore reserved for things like drug trials. 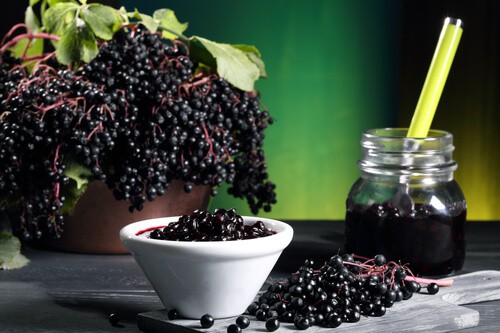 Elderberries are Commonly Made into Syrups or Extracts. They may be dangerous if uncooked.

However, in a ﻿study published in 200﻿4 (12) done on the 1999-2000 influenza season in Norway, scientists decided to put Elderberry Extract to the test on 60 patients ages 18-54 suffering from flu-like symptoms.

Participants in the study were either given Elderberry Extract Syrup or Placebo Syrup 4-5 times per day for a series of 5 days. During this period, participants recorded the severity of their symptoms on a v﻿﻿isual analog scale (13) which is commonly used for subjective metrics that are hard to measure or quantify.

Those given the elderberry extract found relief from their symptoms an average of 4 days earlier compared to the control group and were less likely to need to receive “rescue medication” or additional intervention.

Although this study was rather small (60 participants), it’s still quite telling of the potential that this berry has in actual-real life interventions rather than just theoretical.

Based on the research we've looked at, it's safe to say that berries should be very regularly consumed by most people. You're not going to find any other group of foods with the specific properties that berries can provide, but make sure you're also eating plenty of vegetables like kale which contain even more benefits.

Don't stress about finding all sorts of exotic berries either. Find berries you can afford, recipes you love, and get them into your diet on a regular basis without stressing yourself out.