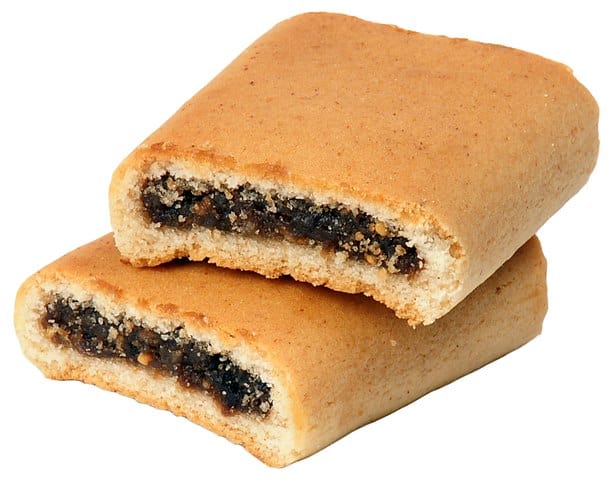 Verdict: Looking at their newest ingredient statement, Fig Newtons are vegan because they no longer have whey or any other milk products.

The first ingredient that pops out is figs which are certainly vegan, despite claims that they have dead wasps inside. Whether or not this is true for all commercial figs, it’s a ridiculous notion to claim that the natural pollination process of a plant would result in it not being vegan. Also, many figs are grown without wasp pollination.

The second ingredient is flour which we’ve already covered in another blog post.

But wait, what about the sugar in Fig Newtons. Even though we’ve already covered the sugar topic (click that link to read about it) in great detail, let’s re-hash it in the context of this product.

As a rule of thumb, most vegans will practice the following to fit within the guidelines of living the lifestyle in a way that’s possible and practicable.

If you see sugar in a commercial product (such as this one), you aren’t going to be able to verify whether it’s gone through that process. The manufacturers themselves probably won’t know.

The harm to animals when purchasing the sugar in a product such as Fig Newtons is so minute that it really doesn’t matter. By abstaining for that reason, you may only make veganism seem difficult to others. And at the end of the day, this drives people away and harms more animals.

I’m of the opinion that all you have to do is avoid labeled animal products. Of course, you also shouldn’t buy animal products such as leather, fur etc.

Palm oil itself is not a non-vegan ingredient, but some attention has been brought to horrible practices done by the palm oil industries which cause deforestation and destroy the homes of orangutans. It’s pretty bad.

But one must ask themselves what the driving force behind deforestation is?

You guessed it, it’s animal agriculture. Not palm oil.

That’s not to say that what has been done in the name of palm oil is good. It certainly isn’t.

But in many ways, it’s no different than dates, olive oil or other plant foods that we grow and enjoy.

Rather than focusing on palm oil, eliminating animal agriculture would give us a lot more room to produce these things in a more ethical fashion.

The goal of veganism should be to eliminate all labeled animal products first. Then if you desire, start looking into other things like palm oil and decide if you want to remove them or not. But most people will agree that it’s certainly not a requirement.

Although the video below goes into several unrelated topics, the first 5-10 minutes cover the issue of palm oil in a way that’s very reasonable and understandable.

If you’ve got a few minutes, it’s worth checking out.