Ninja is one of the most well-known blender manufacturers out there. They make fantastic budget-friendly blenders that are accessible to everyone.

A Ninja blender isn’t an appliance that will just sit gathering dust on your countertop, either. The Ninja BL770 and BL771 are perfect illustrations of everything a blender can be.

If you’re interested in these blenders but aren’t sure which one you should get, you’re in the right place. We’ll compare and contrast them, so you know what the benefits are for either one.

The Ninja BL770 is, without a doubt, one of the most versatile Ninja blenders ever created. With a food processing attachment, 72-ounce blending pitcher, and to-go cups, the sheer breadth of recipes you can use it in is mind-blowing. Get this blender if you’re looking for a flexible appliance suitable for tons of recipes.

An honest comparison will reveal that the BL771 is pretty much identical to the BL770. As such, it has all the versatility of the BL770 with one addition: a mini mixing bowl that fits inside the food processor. Like its predecessor, it’s a fantastic multi-purpose blender for anyone looking for a versatile appliance.

Out of the two, we’d recommend the Ninja BL770. We feel it has everything you need in a blender as-is, and that the mini-BL770’s mini mixing bowl is unnecessary.

Looking for more information on Ninja blenders? Read our Best Ninja Blender guide to see our top picks for the entire brand.

Related Article: Ninja BL660 vs Nutribullet Pro: Which One is Better for You? 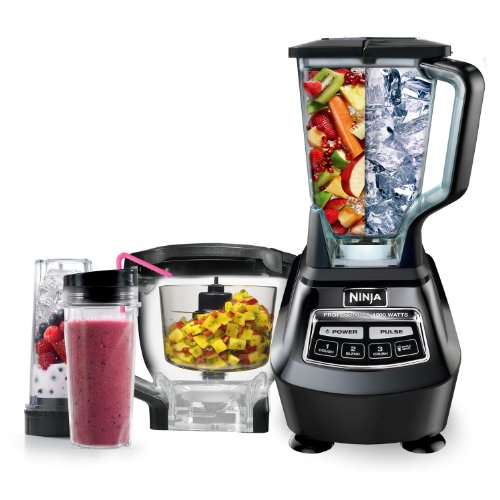 Navigate This Article Using The Links Below
Ninja BL770 vs BL771 Summary
Similarities
Differences
Which One Should You Pick?

The BL770 and BL771 have the distinct honor of being some of the most powerful Ninja blenders available. Their motors both have a jaw-dropping 1500 watts, which allows them to dice, slice, and chop your ingredients like nothing else.

It doesn’t matter what you’re making. It could be margaritas, dips, doughs, or thick smoothies – either one of these blenders will be able to pulverize it to the perfect texture.

Traditional blenders usually have a ring of blades on the bottom of the pitcher. This design has worked well enough historically, but it’s far from ideal and tends to miss floating chunks.

Both the BL770 and BL771 shake up the routine in blender design with their stacked blade assembly. Rather than sitting on the bottom of the pitcher, the blades in these blenders wrap up a tower in the center.

The design is more than just intriguing-looking. Because there are blades positioned at all levels in the pitcher, all your ingredients can be reached so no unsightly pieces are left behind.

It’s clear that both of these blenders were built with all kinds of users in mind. On top of a big pitcher and food processor, they both include to-go cups with lids.

Making frozen drinks and smoothies for yourself has never been more convenient. You can blend right into the single-serving cups, screw on the to-go lids, and be on your way.

One of the key components for either the BL770 or BL771 is their large pitchers. Both come with a 72-ounce pitcher, which is fantastic for making large amounts of something at a time.

They don’t call the BL770 and BL771 “Mega Kitchen Systems” for no reason. One aspect that really sets these blenders apart from others is the fact that they come with food processors.

The food processors just give you some more flexibility on what kinds of recipes you can use your blender for. You can use them to chop veggies or even make up to two pounds of dough at a time.

Basically, whenever something needs chopping or mixing, you can whip out the Ninja’s food processor bowl.

A blender isn’t just about fancy attachments – it’s also about the settings it has. If you have more blend speeds and settings to choose from, you can more easily tailor your blender’s use to each dish.

For either one of these blenders, you get five settings: dough, blend, crush, single-serve, and pulse. What’s more, the straightforward names of each setting tell you exactly what it’s for. You won’t need to struggle to guess which button to press for various ingredients.

Blenders are notoriously difficult to clean. The corners and blades in the pitchers get covered in food, and washing carefully around them without getting nicked is a dangerous chore.

Fortunately, the BL770 and BL771 make cleanup much easier for you. Both have dishwasher-safe parts, so cleaning up after cooking is as simple as giving your blender a rinse before running it through your dishwasher.

With such an easy cleanup, you won’t ever dread using these blenders.

There honestly aren’t many differences between the BL770 and BL771. In fact, the only real difference is that the BL771 comes with an additional bowl attachment for the food processor.

The attachment fits inside the food processor. It can be used for meal prep or finishing up a recipe.

In all other regards, these blenders are the same.

The Mega Kitchen System, whether you’re choosing the 770 or 771, is a great blending system. You’ll get everything you need to make a huge range of recipes with either one.

That being said, choosing between them isn’t necessarily going to be difficult. You only need to consider one difference: the bowl in a bowl food processor.

Do you think you’re ever going to need to use it for those finishing culinary touches? Or are you not likely to use it very often? The answer to that question will tell you which one to choose.

We personally think the food processor is fine as it is. The bowl in a bowl attachment doesn’t really seem necessary, and we don’t feel we’d use it very frequently.

That’s why our recommendation is the BL770, but there’s no reason you couldn’t go with the BL771 if you think you’ll need the bowl in a bowl attachment.

Recommended Article: Ninja BL770 vs BL660: Which One Should You Pick?

Why is Ninja Blender Power Button Blinking Red? (Does It Need to Be Charged?)

Why is My Ninja Blender Smoking & How to Fix It? (ANSWERED)

Does the Ninja Blender Have a Juicer Attachment? (ANSWERED)

Can a Ninja Blender Be Used as a Food Processor? (ANSWERED)

Does the Ninja Blender Have a Lifetime Warranty? (ANSWERED)

Can Ninja Blenders Go In The Dishwasher? (EXPLAINED)

Do Ninja Blenders Have a Warranty? (Answered and Explained)

Which Ninja Blender is the Most Powerful? (Top 6 Listed)

Ninja Kitchen System vs Nutribullet: Which Should You Pick?

Ninja Kitchen System vs Cuisinart Food Processor: Which is Better?

Ninja BL660 vs Nutribullet Pro: Which One is Better for You?

Ninja BL770 vs Vitamix: Which One Should You Choose?

Ninja Supra vs Ninja Professional: Which One Should You Get?

Ninja Supra vs Ninja Chef: Which One is Better?

Ninja Supra vs Mega: Which One Should You Get?

Nutribullet Blender Combo vs Ninja Pro Blender 1000 – Which is Better?

How to Juice with a Ninja Blender (Simple Steps)