A hardtop gazebo and any temporary gazebo are very different outdoor structures. They each meet a distinct need. One of the biggest differences between them is the level of wind resistance. A temporary gazebo is far less able to withstand wind storms and strong gusts.

What is a gazebo wind bar? It’s one of many methods that can strengthen your temporary pop-up, canopy, and camp gazebo.

In this post, we delve into how a gazebo wind bar can help, and how best to use it with other strengthening tools for temporary gazebos.

Quick Answer: What is a Gazebo Wind Bar?

A gazebo wind bar is an iron or plastic frame that fits into the gazebo roof to make the entire structure rigid and more wind resistant. It’s an after-market accessory for temporary gazebos such as pop-up, canopy, and camp gazebos.

A gazebo wind bar is one of 4 key methods for strengthening your temporary gazebo against wind. When used in conjunction with smart positioning, leg weight bags, and guy ropes you can significantly increase the amount of wind that your gazebo can weather.

Can a Gazebo Withstand Wind? 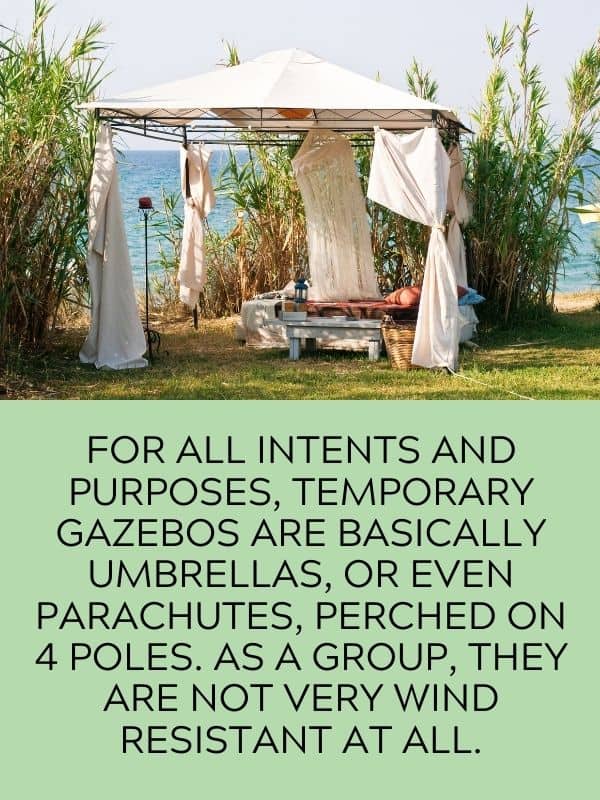 Depends on the gazebo. A hardtop gazebo (a structure with a frame and solid roof made of wood, vinyl, steel, aluminum or polycarbonate) is an extremely durable structure.

Hardtop gazebos are intended to stay up year-round and are securely anchored to a porch or other foundation. There are even some models that are designed for especially snowy environments.

Wind resistance is a feature that most manufacturers are happy to call out about their hardtop product. In the design phase, it’s not uncommon for them to test hardtop gazebos for wind gusts of 50+ mph (43+ knots).

When shopping for a hardtop gazebo, make sure to research wind resistance. If that information isn’t apparent on a product page, ask the manufacturer or the vendor. That being said, when you purchase any hardtop gazebo (especially one with a wood, vinyl, or steel frame), you can feel pretty confident that you’re buying a highly wind-resistant structure

On the other hand, temporary or event gazebos (pop-up, canopy, and camp gazebos) are intended to be quickly set up for a short period of time – a day at the beach, a soccer game, a wedding – and then packed up just as quickly.

They are made of less rigid and durable materials. Pop-up, canopy, and tent gazebos usually have plastic or aluminum frames with a polyester or canvas fabric top. They are extremely portable and designed to fold up easily for storage.

For all intents and purposes, temporary gazebos are basically umbrellas, or even parachutes, perched on 4 poles. As a group, they are not very wind resistant at all. But there are ways to significantly strengthen them so that you don’t need to worry that a sudden gust will whisk it away.

What Wind Speed Can a Gazebo Withstand?

As we mentioned above, manufacturers of hardtop gazebos usually test their products against significant wind pressure. And for good reason. When you and a friend spend a day or two erecting an 800 lbs. wood gazebo, you want to know that it’s not going to fall over when the first strong gust blows in.

While there’s no universal minimum that hardtop manufacturers adhere to when it comes to wind resistance testing, there is a standard wind scale that might help you determine exactly how much wind resistance you need.

The Beaufort Wind Scale translates wind speed into its impact on sea and land. The Beaufort Scale includes speeds from 0-64 knots. You can calculate miles per hour to knots here.

64+ knots is designated as hurricane winds, which have their own scale.

Temporary gazebos with lightweight frames and fabric roofs can be safely set up and strengthened using the methods below in wind speeds less than a force of 7 on the Beaufort Scale.

A wind force of 7 means a wind speed of 28-33 knots; at this “Near Gale” speed, whole trees start to move and you’ll have a difficult time walking into the wind.

How do you Strengthen a Gazebo? 4 Methods

The best proactive measure you can take to strengthen your gazebo is to set it up correctly and smartly position it on your property.

The frame of your gazebo should be the strongest component of the structure. But that’s only the case if you position the frame where it will encounter the least resistance from the wind.

To position your gazebo for the utmost wind resistance, first identify the direction that the wind typically blows. Second, position a corner of your frame into the wind. Your gazebo will be far more aerodynamic because the wind will travel around the frame as opposed to slamming into it. 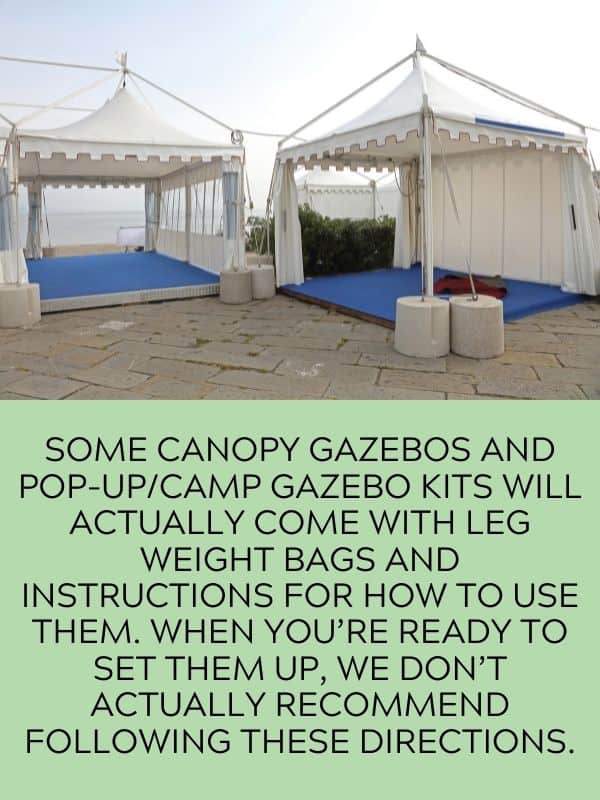 Like the name implies, these helpful tools weigh down the legs of your gazebo to keep it in place when an unexpected gust threatens disaster.

There are numerous options out there for purchase. If you’ve ever put a pair of dog shoes on your pup, you know what gazebo leg weight bags look like. You essentially fill them up and strap them on.

We’ve found a better method. The instructions will suggest that you weight the bags by filling with sand, rocks, or dirt. Instead we recommend that you use a filled 2-liter bottle to slip into the bags.

You can use an unopened bottle of your favorite surgery beverage or refill an empty bottle with water. While sand, rocks, and dirt will absolutely work (and can add slightly more weight), the bottle option is super easy, highly portable, and much less messy.

Guy ropes or guy lines are nylon ropes that you attach to the gazebo frame and then anchor to the ground at a 45 degree angle with strong pegs. In short, they keep your temporary gazebo in one place if things get a little too windy.

That 45 degree angle is the most important thing to remember when attaching guy ropes. Too steep an angle still leaves your frame vulnerable to swaying, buckling, and even blowing away.

On the other hand, too horizontal an angle and they no longer provide any real support; plus they become a tripping hazard.

If you’re serious about strengthening your gazebo, every method listed here is important but anchoring your gazebo to the ground with guy lines is paramount. Guy ropes are amazing pieces of material. While most guy lines that you can purchase weigh less than a tenth of a pound, they have a strength capacity of more than 400 lbs…for each line. 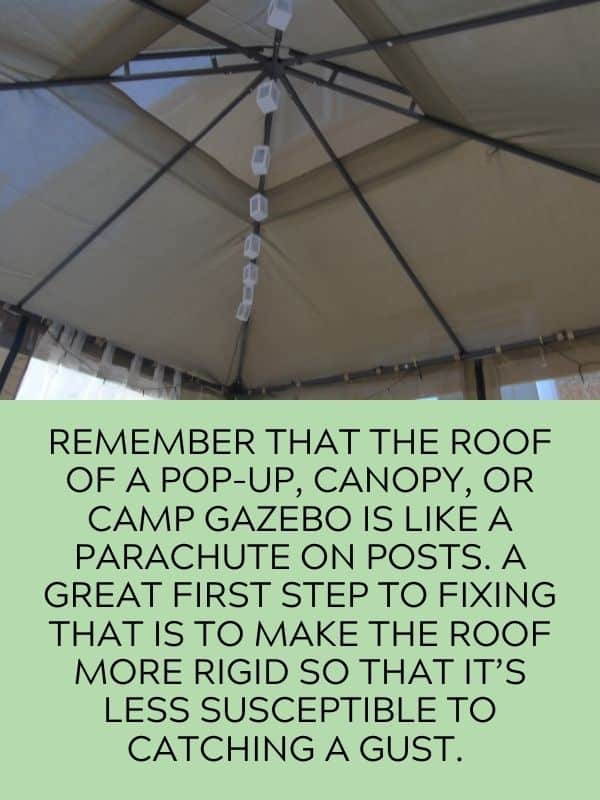 Remember that the roof of a pop-up, canopy, or camp gazebo is like a parachute on posts. A great first step to fixing that is to make the roof more rigid so that it’s less susceptible to catching a gust.

Gazebo wind bars perform this function. They’re inexpensive and come in standard gazebo sizes (usually square). They are foldable just like your gazebo so that everything can be stored together.

Gazebo wind bars are typically made with iron or plastic. Each of the bars has a hinge so that it can snap into place inside the roof and then fold back down. They are extremely lightweight and like guy lines, they add significant strength to the overall gazebo structure.

Temporary gazebos are fantastic. There’s no other portable outdoor structure that is as easy to set up while also providing a broad range of protection from the elements. They are also far less expensive than hardtop gazebos and way more portable.

They’re just not very wind resistant. We hope that by explaining what is a gazebo wind bar that you now understand why it is a valuable accessory for your gazebo. When used in conjunction with the 3 other methods we’ve outlined, you should feel confident that your gazebo is poised to weather bigger gales.