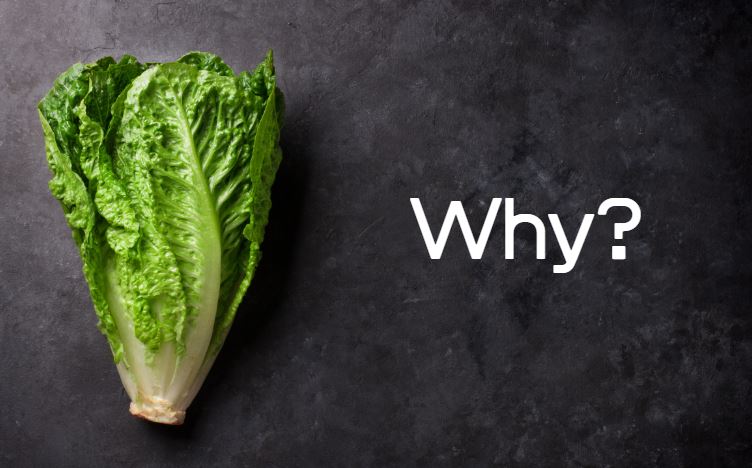 Ever wonder why romaine lettuce is always being recalled? We’re going to dive into this question and investigate the safety precautions you should take with romaine.

Why Is Romaine Lettuce Always Being Recalled?

Quick Answer: Romaine lettuce is recalled when contaminated with biological hazards. It happens frequently with romaine because of where it’s grown—a combination of nearby cattle farms and tainted irrigation streams.

Why Did They Recall Romaine Lettuce?

When romaine lettuce is recalled, it’s usually due to E. coli contamination.

The Food and Drug Administration tends to start testing lettuce as soon as an E. coli outbreak rears its frightening head.

Eventually, the source of the outbreak can be traced to specific regions and farms.

If there’s a recall on romaine but you know for certain where it’s sourced from, you may be able to avoid the contaminated products and only get romaine that’s safe to eat.

However, the FDA often clearly states that you should avoid all romaine lettuce. If this is the case, it’s in your best interest to follow this recommendation for your own safety.

As a general rule, during a recall, it’s wisest to stay away from all romaine lettuce when going out to eat, regardless of where it comes from.

We know that E. coli frequently turns up in Romaine lettuce. But why does it in the first place?

The answer is usually animal waste.

When romaine lettuce is exposed to water from an irrigation system in close proximity to cattle and farm animals, the risk of E. coli goes up.

According to microbiologist Jason Tetro, irrigation canals used for lettuce are often upstream in relation to cattle farms.

This has something to do with the recurrence of E. coli in romaine lettuce—that and the fact that you don’t cook romaine and thus kill the bacteria.

When the manure comes in contact with the water, E. coli can easily find its way into the water stream and subsequently into the romaine the water reaches.

But this can also happen with other types of lettuce (and other vegetables).

What Romaine Lettuce Has Been Recalled?

Romaine lettuce has been repeatedly recalled in the U.S. and Canada.

Sources of outbreaks have had different locations, including California and Ontario. But it’s not that simple to track.

Farms distribute produce to different regions and states. Ultimately, lettuce grown in California can travel across the country and be sold in your local grocery store.

This is why warnings indicate that you should avoid all romaine lettuce when you don’t know exactly where it came from.

Late in 2018, there were reports popping up around the country of E. coli cases. The sources were traced to certain California regions.

In January of 2019, the CDC released a statement that the outbreaks related to romaine lettuce grown in the Central Coastal region of California were officially over.

If you remember the romaine lettuce recall around the time of October, you’ll be glad to know that there is definitely no longer any danger.

If there’s no recall or crisis surrounding this common lettuce type, there’s no need to fear buying it.

Is Romaine Lettuce from Trader Joe’s Safe to Eat?

Yes, romaine lettuce from Trader Joe’s is safe to eat.

When the recall hit last year, Trader Joe’s got rid of any romaine lettuce products sold in stores that could have possibly been contaminated and restocked with romaine sourced from safe growing regions.

According to Trader Joe’s, there were no cases of E. coli traced to its own products.

If it seems like romaine lettuce is always being recalled, it has something to do with the fact that lettuces are frequently grown in close proximity to cattle.

Not only romaine lettuce, but also green leaf, red leaf and other lettuce types may be recalled from time to time for safety reasons.

If you know that your romaine lettuce was grown in a non-contaminated area during a recall, you may be able to continue to enjoy romaine lettuce salads. Typically, this can possibly apply to local lettuce.

But during a recall, avoid buying romaine from the grocery store or ordering a romaine lettuce salad off of a lunch menu.