What's the difference between apple butter and apple jelly? We're answering your biggest questions about apple butter and going into detail about the taste and texture. Then we'll give you some tips on how to serve it. 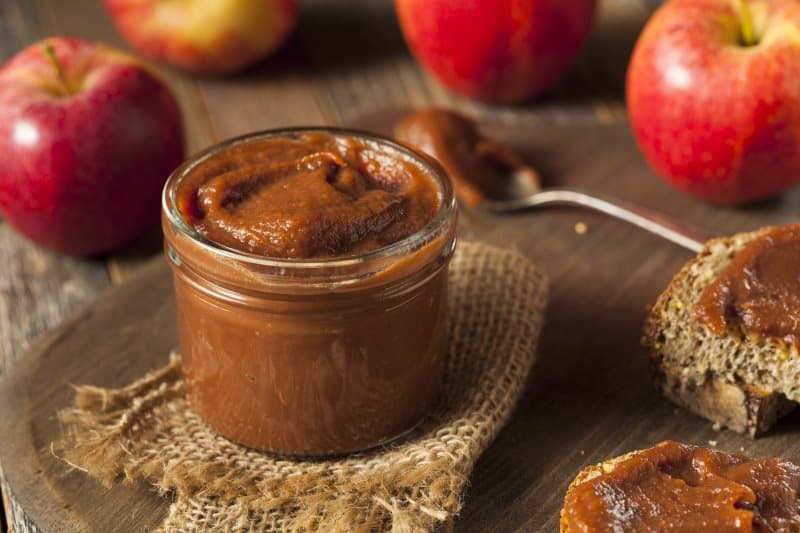 If you've tasted McIntosh, Gala and Granny Smith apples, you know the range of appley flavors from tart to sweet. This same range is found in apple butters since they can be made with any type of apple.

Spices like cinnamon and nutmeg are also typical ingredients in apple butter. This can often make it taste similar to a spiced apple pie.

Whereas applesauce is generally wet and medium-thick, apple butter is creamy and dense like whipped butter. Also like butter, it'll spread on a slice of bread.

Some apple butters are chunky while others are completely smooth. Even the chunky style of apple butter is creamy as the hunks of fruit are cooked to a melt-in-your-mouth point.

There are similarities between apple butter and jelly in the same way jams are similar to jellies. Both are thick spreads made from sweetened and condensed fruits.

But apple butter shares more in common jam and chutney since it's much closer to mashed fruit than to a gelatinous juice type of product.

What Do You Eat with Apple Butter?

The most obvious choice might be toast, but there are plenty of other things you can slather apple butter on. Think crackers with vegan cashew cheese, veggie burgers and pancakes.

Stir it into oatmeal, bake it into energy bars or drizzle it on top of a bowl of vegan ice cream. You could even use apple butter for the base of an autumn spiced vegan gravy. Now, you may be wondering what you can't do with apple butter.

There's no reason you can't use applesauce instead of apple butter, but it will be quite different in consistency and richness. Depending on what you're using it for, even vegan butter with spices you'd use in apple pie could work.

A sweet chutney with a similar flavor to apple butter may also do well. It really depends on whether you're looking to approximate flavor or texture.

Let's see how easy it is to make apple butter. These recipes work for any type of apple, but remember that tart apples may require added sugar.

Here's a super simple recipe for apple butter that only requires two ingredients: apples and cinnamon. If you use sweet apples, there's no need for added sugar. If you like, you can add other spices like allspice, cardamom and even ginger.

The great thing about apple butter is that it's a clever way to use up apples that are on their way out. Try an apple and pear butter the next time you have some pears that need to be used up, too. For this recipe, you'll need the fruit, brown sugar and a cinnamon stick.

Apple butter is sort of but not quite like applesauce and apple jelly. It's rich, creamy and buttery in texture with apple pie flavor. Eat it on toast, top your vegan pancakes with it or add it to your fruit-based dessert recipes, but don't forget that you can easily sprinkle in some herbs like rosemary and thyme and pair it with savory meals.