Can I use spinach instead of kale? That is one of the most frequently asked questions that comes up when people discuss super greens. If you have wondered this, then keep reading.

Here we will answer whether spinach can be used in place of kale, the differences between kale and spinach, and other commonly asked questions about each.

So, can I use spinach instead of kale?

Yes, you can use spinach instead of kale.

Kale and spinach are entirely different plants, but they are universally interchangeable. Any dish or recipe that uses one you can create using the other.

If you use spinach instead of kale, the resulting dish will be milder in flavor and lack the bitter edge that kale often displays.

Which flavor profile is preferable is entirely up to the individual.

What is the difference between kale and spinach?

Spinach (Spinacia oleracea) is a member of the Amaranthaceae family. Kale (Brassica oleracea) belongs to the Brassicaceae family. Both are considered super greens because of their extremely high nutritional content. Despite this similarity, they are not the same, and several differences might cause you to prefer one over the other.

Let’s look at their:

Both spinach and kale have green leaves, but that is where the similarity in looks ends. Kale is often called leaf cabbage for an excellent reason. It has large fan-shaped leaves with frilly edges and a distinct coarse texture.

Spinach, the edible leaf of a flowering plant, has oval to triangular leaves with smooth edges and a waxy surface.

Kale commonly grows to 18 inches tall, but some varieties can reach 4 feet.  Spinach is usually harvested when it is 4 – 6 inches tall.

Spinach and kale are similar in taste and texture, but kale is crunchier and more flavorful. It has more of a bitter edge and can be tougher to bite through.

Spinach can also be slightly bitter at times but to a lesser degree than kale and tends to be more crunchy than chewy.

In the case of either, they seem to have a profile that people either love or loathe.

Kale and spinach are both nutritionally dense foods that have many health benefits. It would be difficult to say one outstrips the other. Each has advantages and disadvantages.

Kale is higher in:

Spinach is higher in:

Are kale and spinach interchangeable?

Spinach and kale are universally interchangeable. Any dish or drink that you can create using one will work just as well with the other.

They differ in taste, with kale having a more robust flavor and a stronger bitter note and spinach being milder and creamier. Each also holds advantages in specific nutritional categories.

Which is best to use in any particular way is a matter of priorities.

What is an alternative to kale?

Kale’s many benefits are well established, but what if you want to make veggie wraps or enjoy a nice smoothie, but your grocer is out of fresh and frozen kale. For those trying times, here are some alternatives that can be used in place of kale.

Can you substitute spinach for kale in a soup recipe?

Yes, you can substitute spinach for kale in soup recipes. The result will be a milder flavored soup with more sweetness and a creamier texture.

Spinach and kale have similar flavor profiles, but spinach is milder in taste and has a less bitter edge.

What lasts longer, kale or spinach?

Kale and spinach have equal shelf lives. Once cooked, kale or spinach will last 3-5 days. Stored in the refrigerator raw, they will stay good for 5-7 days. Frozen, they are good for 10-12 months.

Are kale and spinach smoothies good for you?

Spinach and kale smoothies are extremely good for you. Green smoothies are loaded with vitamins, minerals, and fiber, but you need to remember a few things to get the most from them.

What tastes better in smoothies, kale, or spinach?

It is advisable to use a mix of kale and spinach to maximize your smoothies’ available nutrition and health benefits.

Can I use kale instead of spinach in a smoothie?

Yes, you can use kale instead of spinach in a smoothie. From a culinary standpoint, the two are considered entirely interchangeable.

Does kale have more fiber than spinach?

Yes, kale does have more fiber than spinach. Per 100-gram serving, kale has 4.1g of dietary fiber, and spinach has 2.2g. 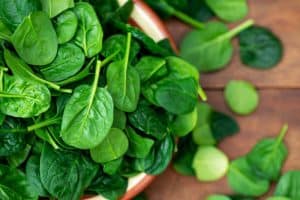 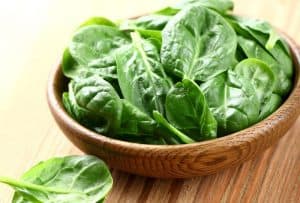