Looking for fruits like muskmelon? You’ll find them here. Then you’re probably curious to find out what other substitutes look and taste similar to it. It’s a unique fruit that stands apart from the rest with a trademark sweet and musky scent to its watery and refreshing tasting flesh. Unlike other melons, it’s also fairly plain on the outside, giving no hint as to what it contains underneath its thick rind. 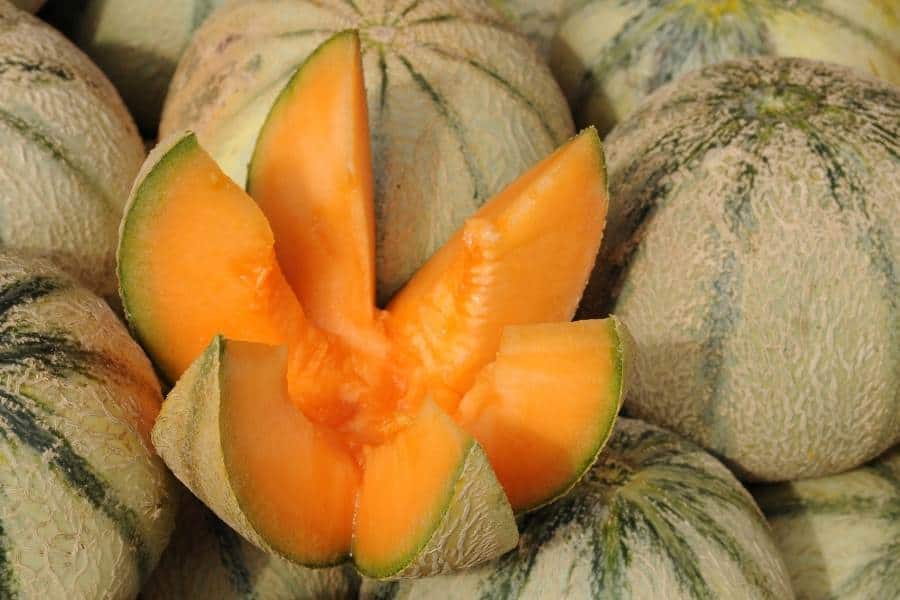 Muskmelons usually have a thin, rough and ribbed rind. When they’re fully ripe, you can cut them open. At this stage their flesh will be bright and peach colored with a centre of soft seeds that you can easily remove with a spoon. It’s dense flesh is incredibly sweet and has a musky taste. Like most melons it’s high in water, making it very filling and especially cooling when eating in hot climates. It’s recommended that you consume a muskmelon immediately or soon after you’ve cut it open. You’ll be able to tell if it’s no longer suitable for eating, as it becomes mushy and slimy as well as less sweet. Some people even feel that an expired melon can develop an acetone like taste and odor — although this is unusual! To keep enjoying more fruits like it, here are a few others that look and taste similar to the muskmelon. 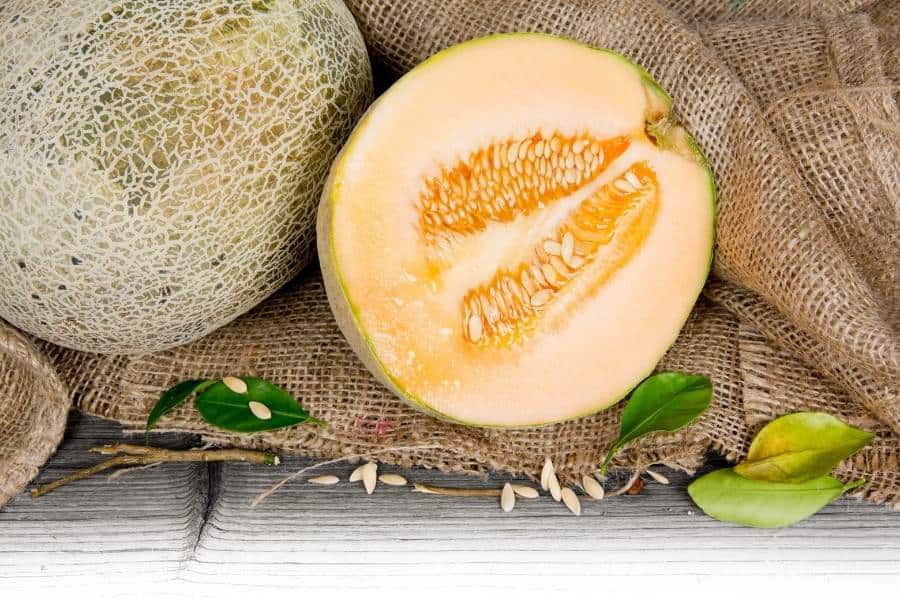 The cantaloupe is actually a variety of the muskmelon, but it’s considered its own fruit for many reasons. It tends to have a light green rind and skin and it’s flesh is sweeter and less muskier. It’s the most popular type of melon in America as we eat more of this melon than any other type. It takes just 90 days for a fruit to ripen on the stem and it will detach from the vine by itself to indicate it’s ready to be harvested — which will have to take place by hand. Like most melons the cantaloupe is best eaten fresh and doesn’t store or freeze well. It’s a popular addition to fruit salads and is often used as an edible decoration element when its flesh is scooped into tiny balls. 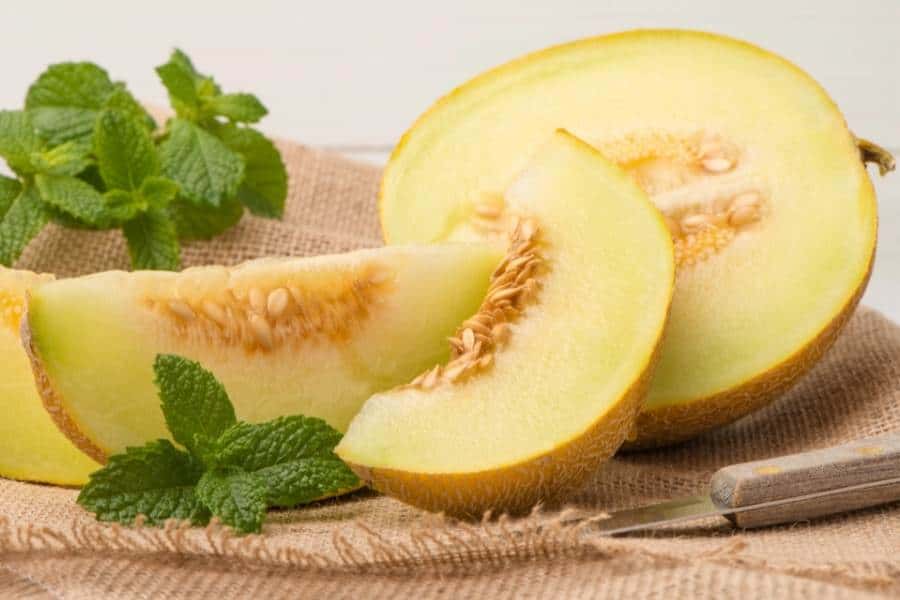 You’ll immediately notice that the honeydew melon differs from a muskmelon by its smooth waxy skin and outer appearance. It also has a light green flesh and has very little of the musky taste you’d associate with the muskmelon. It’s flesh is also firmer and crisper. It makes up for this by being the sweetest melon you can get your hands on. Unlike other fruits, the honeydew only begins to ripen once harvested. This gives it a slightly longer shelf life than most other melons. It’s high in water and vitamin C but compared to a cantaloupe, has fewer vitamins and minerals. You can enjoy honeydew melons as they are or you can serve them as a refreshing part of a healthy breakfast, alongside yoghurt and granola. 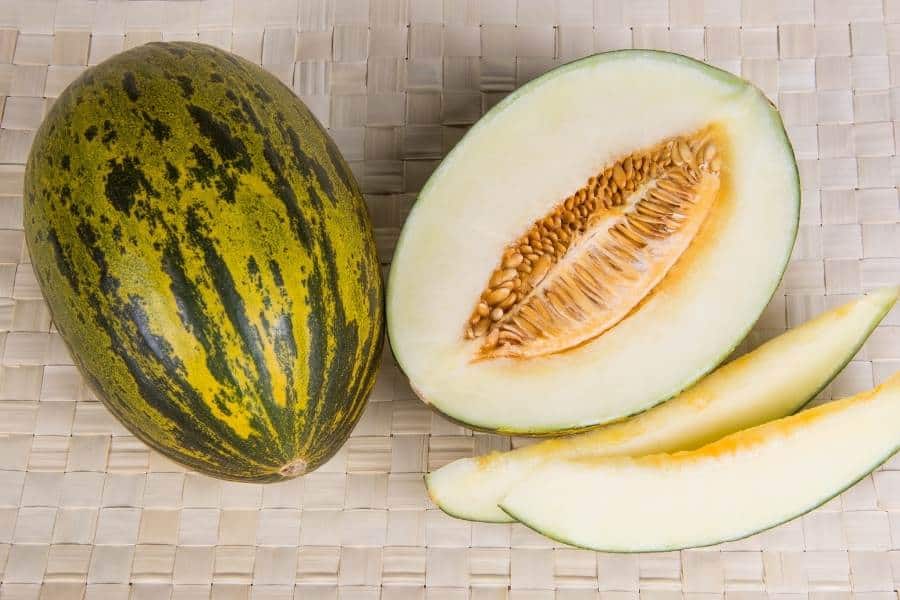 This melon gets its unusual name from the fact that it can keep until Christmas, which is usually up to six weeks after it’s been harvested — a quality it doesn’t share with any other melon. As it generally grows up to 12 inches, it’s small in size and has a rough and wrinkled outer skin. While native to turkey, it’s a specialty in the La Mancha region of Spain, where it’s nicknamed Piel de Sapo or toad skin. Open this melon up and you’ll notice it’s flesh can range from white, to yellow, to green. It’s taste is light and sweet, but it also has an earthy component to its flavor. In the La Mancha region, this melon is served as is or as a cold soup or gazpacho. It’s also often served as an appetizer when wrapped in dry cured ham native to the region. 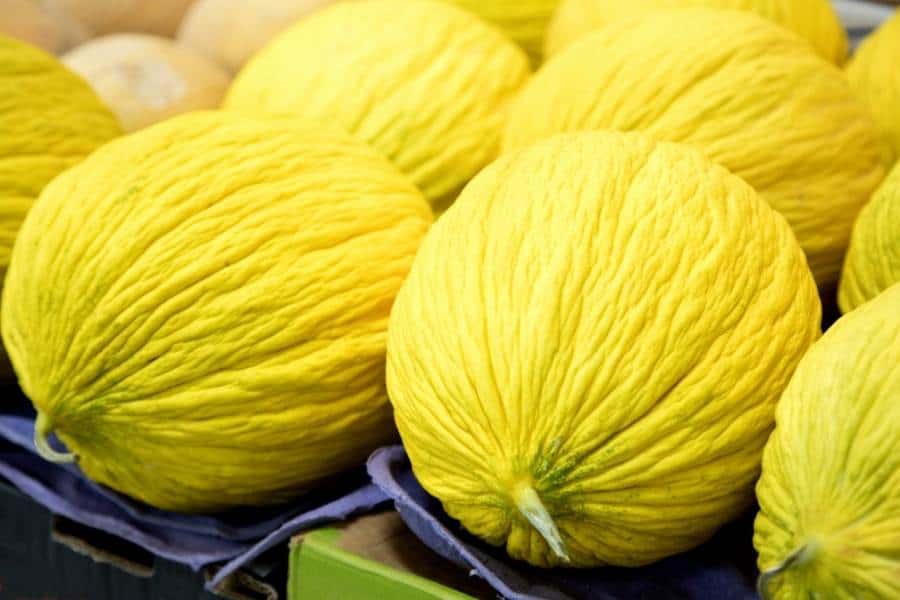 The casaba melon immediately stands apart from other melons by having yellow skin and an ovoid shape. Slice it open and you’ll see very light green, almost white flesh. This melon gets its name from Kasaba, Turkey, where it was imported from until the USA began to cultivate their own. It’s taste is light and sweet, with notes of cucumber and asian pair mixing with its existing melon aroma and flavor. As a shelf ripened fruit, the casaba melon will increase its sugar levels as long as it’s attached to its vine. Unlike other melons, it won’t automatically detach from the vine when it reaches its ideal stage, giving the producer some control over its sweetness. If consumed before it reaches its peak sweetness levels, it can be served as a savory vegetable, taking the place of cucumbers in salads and other prepared dishes. 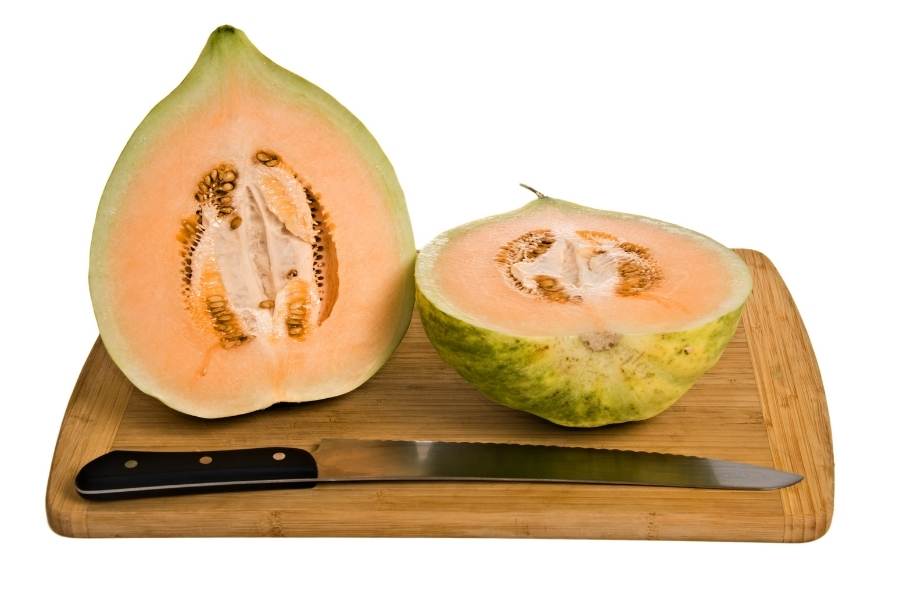 Acorn shaped and with a pale yellow skin, this is a heavier melon which can weigh anywhere between eight and 10 pounds. It looks just as unique on the inside, with peach colored fresh and brown seeds. Unlike other melons, this one has an almost spicy taste that helps it stand apart from the rest, and you can usually detect its unique odor before you’ve opened it up for consumption. It’s said to have been created when someone crossed a casaba and persian melon, but the details of its exact origins remain unknown. Today, it’s cultivated and enjoyed around the world and has the typical shelf and storage life of a melon. You can enjoy this melon as you would a cantaloupe. Alternatively some people slice it and sprinkle it with salt and lime juice before enjoying it as a snack. 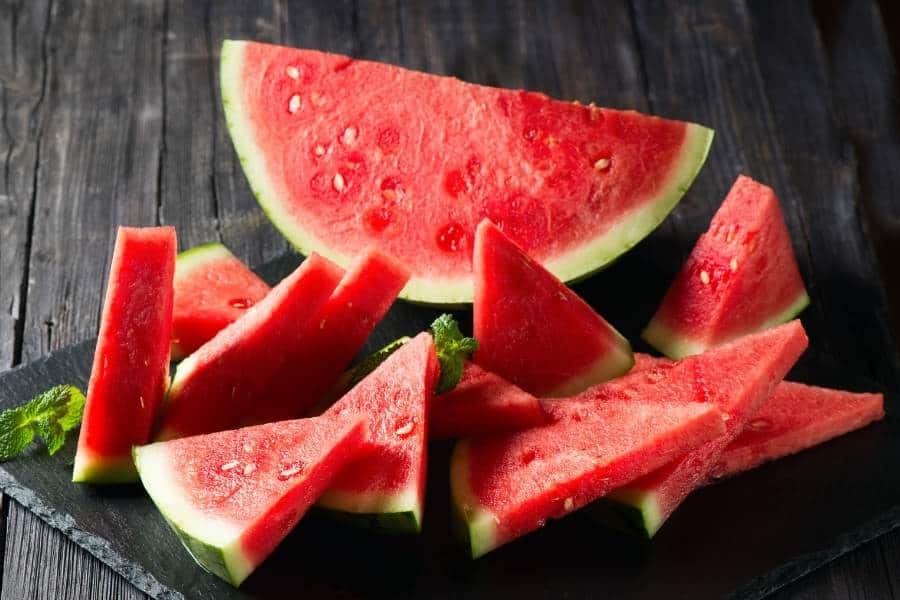 Watermelons are easy to find in the USA and most people have eaten it at one point or another. Although it was first domesticated in Africa it’s now found in many locations. It’s easy to identify with its pink fruit, black seeds and stripy green and white rind. It can also grow to massive sizes, making it one of the larger melon varieties. Many scientists and farmers have experimented with the fruit to produce seedless and even round watermelons. In addition, over 1000 varieties of the fruit exist. While its seeds aren’t eaten they are edible and can be dried and ground into flour. It’s rind is also pickled and eaten as a side dish. 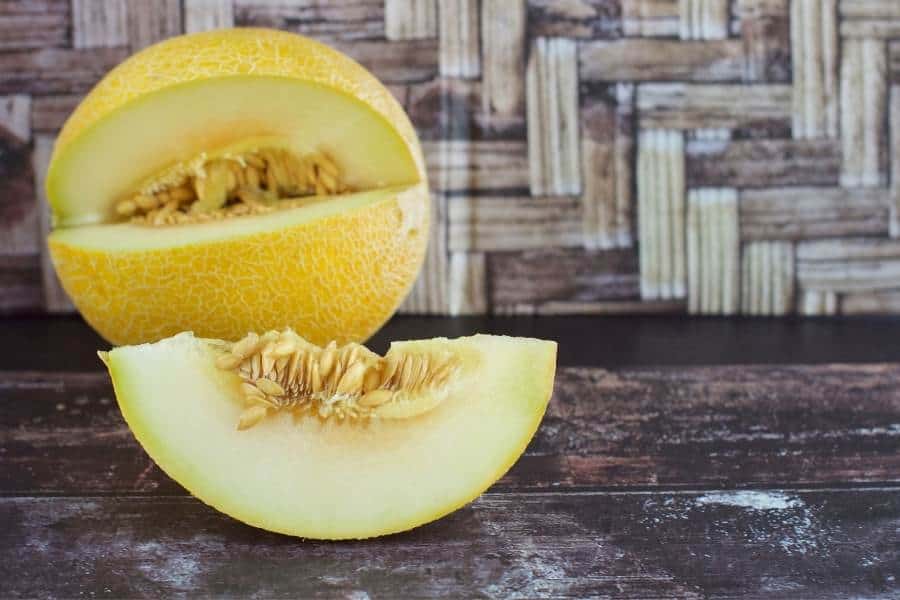 This melon is a hybrid of the cantaloupe and honeydew, and was developed in Israel several decades ago. It’s produced melon that is said to have a spicy flavor and can be cultivated in the warmer climates of the Southern USA. When ripe it has pale green flesh and like the muskmelon it has a musky aroma and taste. While its skin is usually a pale tan, the more orange it gets the more sweeter the Galia melon will be. As it gets ripe and softens rapidly its best enjoyed soon after purchase and eaten fresh. This makes it a melon with one of the shortest lifespans. 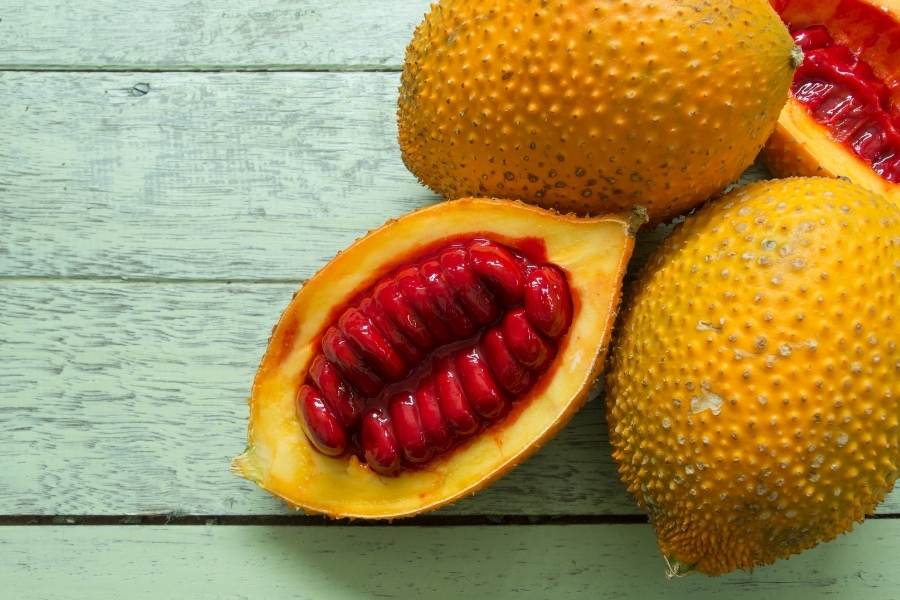 Gac melons are petite in size, growing to up to five inches in length and four inches across with a slight oval shape. It has a spiky rind and its fruit is both yellow and red. However, both parts of its fruit don’t have a taste so are often used in cooking stews or soups, where it can take on the taste of the spices or meats it’s being cooked with – thanks to its spongy flesh. Although it originates in Vietnam it’s grown around Southeast Asia. Unlike other melons its quick growing and a single vine can produce up to 60 melons in a single season. As it contains significantly more lycopene than a tomato, it’s also a healthy addition to any meal. 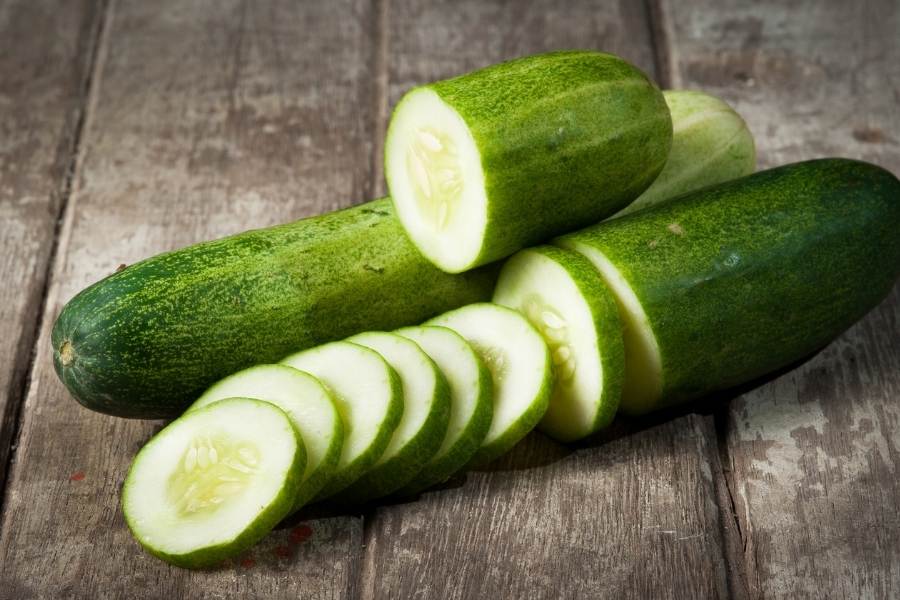 While most people assume the cucumber is a vegetable due to its neutral taste and use in savory salads it’s actually a fruit and closer in relation to melons than you think. Being very low calorie and high in water it’s always been a popular snack amongst dieters. Generally speaking cucumbers come in slicing and pickling form, with almost invisible and completely edible seeds. They can range in shape from large ones longer than your average ruler to ones smaller than your finger. Enjoy this fruit as a cooling snack, with one cup of slices equalling a glass of water in terms of hydration. Eaten with its seeds and peel and you will also enjoy other health benefits. 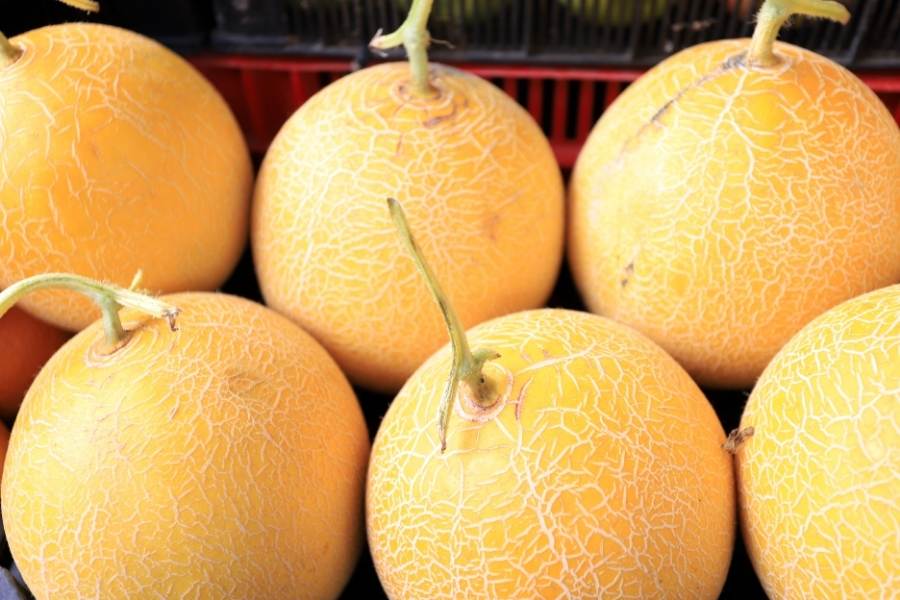 If you’re looking for a super sweet melon then the honey globe will be right up your alley. At its peak ripeness it can contain almost 20% sugar. Because it can only be cultivated and harvested in a short time period it has a high price tag. Its flesh is equally exotic, as its white and soft – very different when compared to most other melons which are usually green or orange and have crisp and firm flesh. It is a fairly large fruit and can grow up to 10 pounds in weight.

There are dozens of varieties of melons available on earth, and each has its own distinct taste. Start with the muskmelon then see if you can try every one of the melons listed above!