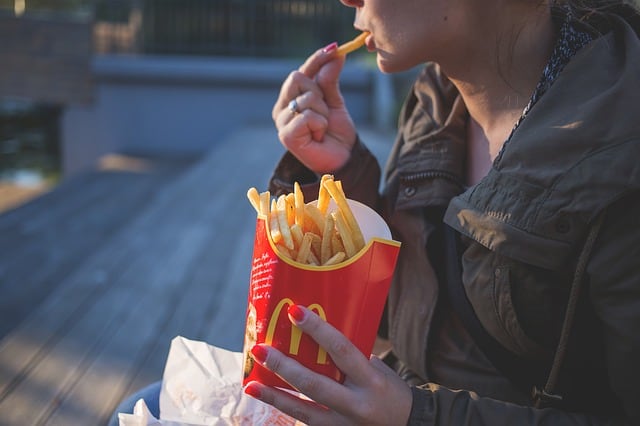 Quick Answer: No, McDonald’s French fries are not vegan. They are, in fact, not even vegetarian.

You would think that the French fries would be the one thing a vegan (or a vegetarian) could eat on a fast food menu, but there’s a big reason that’s not the case at McDonald’s.

You’ll see why when you read the ingredient list…

Here is the ingredient statement for the French fries from McDonald’s website:

For one thing, you can see that there are milk proteins in the French fries. Certainly, dairy products are not vegan as they come from animals.

But did the “natural beef flavor” catch your eye, too?

As it turns out, the issue is not just dairy-related.To our knowledge, McDonald’s makes no claim that this isn’t real beef flavoring derived from the actual animal.

This is a major problem even for vegetarians, at least in the U.S. McDonald’s fast food restaurants in some countries, like India, make fries without beef.

If you’re thinking about trying the fries at a McDonald’s in a non-U.S. country that omits beef from the ingredients, you’ll want to do a little research first to find out if they’re plant-based, as in dairy-free, too.

But so far in America, McDonald’s has never been able to call the fries vegan or vegetarian.

In the past, McDonald’s has received its fair share of backlash for offering French fries without making it clear that they were unsuitable for vegans and vegetarians.

Back in the early 2000s, the fast food chain paid$10 million in a settlementto Hindu and vegetarian groups for leading people to believe that its French fries (and hash browns) were vegetarian (so stay away from the hash browns, too).

McDonald’s was using beef fat to deep-fry the French fries, but promised to make the switch to vegetable oil following the lawsuit.

Still, some confusion remains as to whether the fries are currently even vegetarian, as in not cooked in or made with beef fat.

As you can see from the above ingredient list, McDonald’s seems to stand on shaky grounds where its ingredient explanations are concerned (natural beef flavor = just wheat and milk derivatives?).

However, the company does state that it usesan oil blend with beef flavoringto make its fries.It seems that McDonald’s didn’t make the switch to all-vegetable oil after all.

Suffice it to say, don’t eat the fries from McDonald’s.