In this guide, you'll learn all about the vegan status of butters, oils and a variety of spreads. We'll answer the question: "is butter vegan?" and give you some of the best vegan substitutes for butter. 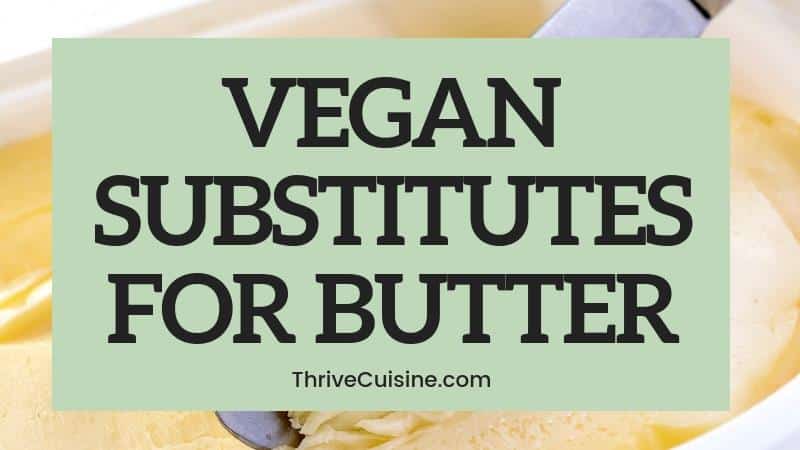 Among all the vegan butter brands out there, here are some of our favorites... 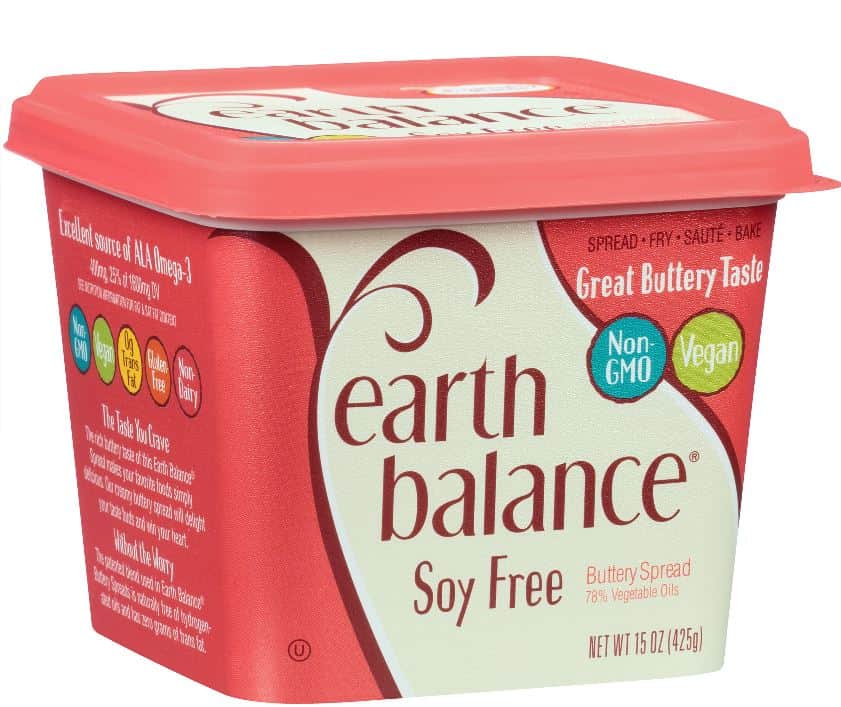 Earth Balance is the #1 choice because it's so easy to find and is actually labeled vegan. All of their products are cruelty-free and you don't have to worry about 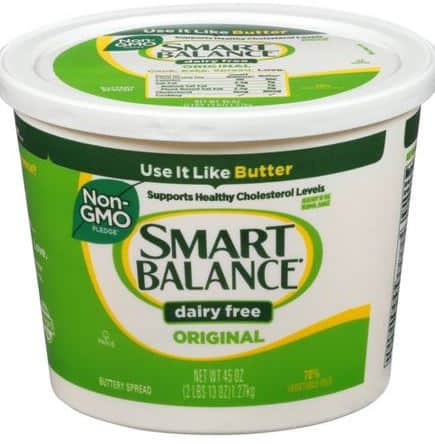 Smart Balance has some questionable trace ingredients (like their Vitamin D fortification which can be either plant or animal-based), but we'd still consider it a technically vegan choice. Just make sure you're getting their latest "dairy-free" products without any whey. Also, beware of fish oil in some of their omega-3 products.

More details later in this article.

This is a great product that you don’t even have to keep in the fridge!

A cleaner alternative to Crisco shortening that can be ordered right online. Great for those indulgent vegan baking sessions.

ANSWER: No. Unfortunately, butter is not vegan as it is the product of churning fermented milk or cream from dairy cows. Luckily, there are a ton of delicious butter alternatives out there if you're trying to go vegan and don't think that you can do without the real thing.

What is Butter Exactly?

Although normally made from cow's milk, butter is most simply a dairy product from any animal that contains around 80% butterfat making it one of the most concentrated form of milk available commercially. Whole milk is churned which breaks down the cell membranes that keep the fat contained. Once the cell membranes are ruptured, the fat from the milk clumps together thus forming the spreadable stuff on the shelf. Obviously the process is a bit more complex, so you can go here if you want to read more.

​Veganism is a way of living which seeks to exclude, as far as is possible and practicable, all forms of exploitation of, and cruelty to, animals for food, clothing or any other purpose. - Vegan Society

Butter isn't considered to be Vegan for the same reason as other dairy products. Dairy is produced by lactating pregnant mammals which suffer from cruel and torturous treatment.

On a grand scale, cows or other mammals are systemically and repeatedly impregnated. Upon giving birth, their babies are taken away which causes them even more distress. The entire process results in cow's or other mammals living a life of torture and misery.

Although a female cow can live up to 25 years, dairy cows are sent away for slaughter at 5 years old. Avoiding milk products reduces the demand thus reducing the amount of suffering undergone by animals that produce commercial milk and whey ﻿prot﻿ein.

All of this is also obviously going to apply to cheese, but there are tons of vegan ﻿cheese alternatives out there which make it super easy to replace.

How Can I Replace Real Butter with Vegan Butter?

A quick look in your grocery store and you'll find all sorts of fatty spreads that don't contain any dairy products. Most of them not only a replacement for spreading, but worked the same way in baked goods as a 1:1 replacement. There are even options available online such as this vegan butter flavored coconut oil linked below.

Some of the Smart Balance products are vegan, while others are not. Their omega-3 infused spread actually had fish in it, making it not even suitable for vegetarians, never-mind vegans!

They have recently made the transition to making their products, dairy-free according to their website, but this wasn't always the case.

Since they don't carry a vegan label (like Earth Balance does), not all of the sources of their ingredients can be verified such as the Vitamin D and mono and diglycerides.

That said, if you want to support a vegan brand, go with Earth Balance as they specifically carry a vegan label. If the two were next to each other, then the ethical choice is clear.

Yes! Earth Balance is a vegan brand and as a result, all of their products are plant-based. Even their omega-3 spread uses flax and algal while other brands use fish oils.

If you're looking for vegan butter, Earth Balance is an excellent choice. It's one of the most accessible vegan butter substitutes that you can find!

No. Ghee is simply clarified regular butter, which means that the water in the butter has been evaporated and the fat and milk solids have been separated. Because ghee still comes from cow's milk, it means that it is not vegan.

No. Lard is the fat from a pig that has been rendered and clarified. Because it is derived directly from an animal, it is not vegan. It is made by boiling cuts of meat so that the fat is extracted and can be separated from the water.

Some Country Crock products seem to be vegan, while others aren't. For example, their original large tub found on Walmart has whey (a dairy product), listed as part of the ingredients. However, it seems as if their new formulation (as of writing this in September 2018 no longer has whey).

As always, be sure to double check what you're getting.

As a side note, many of their products have D3 which could be lanolin derived (sheep's wool), but as we've stated, we don't believe it's worth stressing over these ingredients that aren't specifically labeled.

That said, you're probably better off supporting a vegan brand like Earth Balance if they're both in the same store.

Is I Can’t Believe It’s Not Butter Vegan?

No. The original "I Can't Believe It's Not Butter Products" have whey (an ingredient derived from milk).

Luckily, the company recently came out with a vegan version! It has a clear V and the word "vegan" on it, so be sure to keep a look out in stores.

We would say that Butter Flavored Crisco is vegan, but there are a few nuances. From an ethical perspective, since there's no labeled animal products, most vegans would not have any problem consuming it.

But here's the things that are "questionable"...

Here are the ingredients for reference...

Since it's labeled as an "all-vegetable" shortening, one could probably assume that it's all plant-based, but you never know.

Yes -- most of the time vegetable shortening is typically not made with any animal products, which means that it is vegan. See the Crisco example above.

Sometimes milk products (such as in the "I Can't Believe It's Not Butter" example above) might be present in some brands, but we haven't seen it. To be safe, be sure to check the label for whey and milk derivatives like sodium caseinate.

It's impossible to know for sure unless the brand specifies. However, any artificial butter flavoring is most likely plant-based since that seems to be the industry trend. For example, the butter flavoring in Frank's Buffalo sauce is vegan (source) along with other butter flavors we were able to find online.

Either way, it's best to keep veganism simple and easy and not worry about ingredients that could go either way, especially when you're first starting out. Giving up all labeled animal products will result in 99.9% of the positive impact rather than worrying about micro-ingredients.

Just because it is vegan, does NOT mean that vegan butter or shortening is healthy. To maximize your health living a vegan lifestyle, you need to stick to whole plant foods.