Everyone has heard the infamous saying. You know, the one that has to do with beans being a magical fruit and them making you toot?

While beans, legumes, and pulses are commonly turned into a running joke, they are a  dietary staple of some of the longest living populations.

The scientific data is clear that beans come with a wide array of health benefits. However, these benefits are rarely discussed among the constant shifting of diet fads in the Western world.

Well, it's time to clear the air.

Let's take a deep dive into the science behind beans and legumes to find out if they are magical, good for your heart, cause flatulence, and much more!

To view a specific topic or study, use the handy navigation below.

What Do You Want to Learn About Beans?
The Basics of Beans and Legumes
What is a Bean?
What's the Difference Between Beans and Legumes?
Nutritional Value Overview
Studies Done on Beans and Legumes
Beans and Heart Health
Beans on Lifespan and All Cause Mortality
Beans and Diabetes & Blood Sugar
Canned Beans vs. Cooked or Dried Beans
Do Beans Make You Fart? Beans and Flatulence
Delicious Bean Recipes to Try
Quinoa Black Bean Burritos by Tess Begg
Vegan Sugar Free Baked Beans by W﻿﻿hole Foods Plant Based Cooking Show
Black Bean and Sweet Potato Brownies by Plant Positive Running
Conclusion on Beans

The Basics of Beans and Legumes

What is a Bean?

To many people's surprise, a bean is actually a seed! They are formed in pods by a group of flowering plants called the Fabacae. These plants can come in a lot of different varieties, but their main commonality is that they fruit beans or legumes. (1) 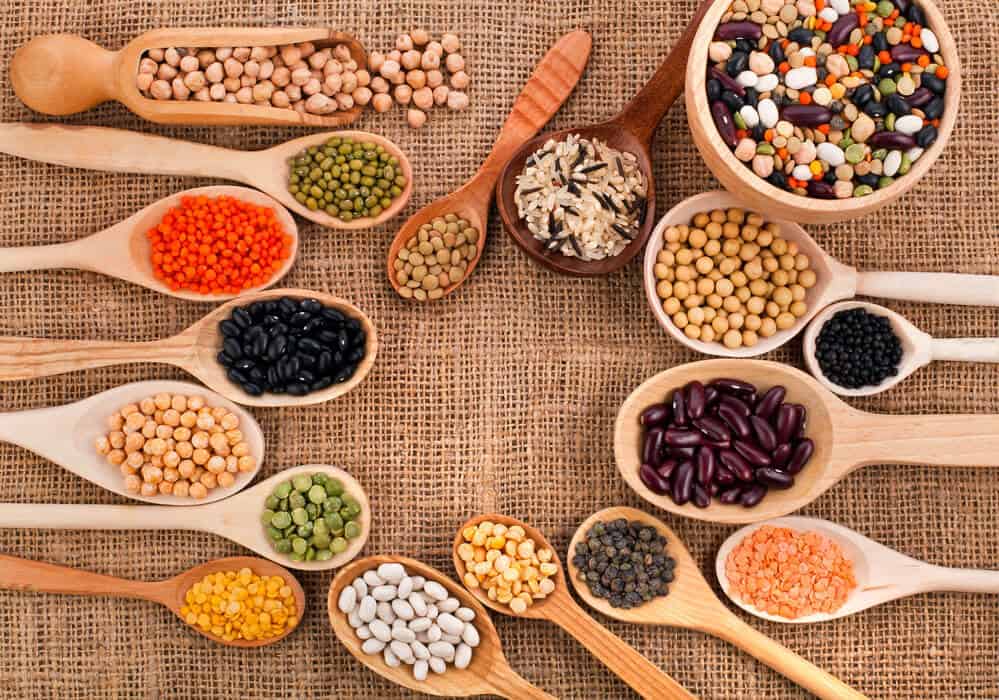 What's the Difference Between Beans, Legumes, and Pulses?

Much like how all squares are rectangles, but not all rectangles are squares, all beans are technically legumes. As stated above, they all originate from the same group of flowering plants, but certain types of these seeds have been classified as beans (such as black beans and black eyed peas). For the purpose of this article, we'll be using the terms interchangeably because they all contain similar nutritional properties.

To keep things simple, most of the research that we're talking about deals with pulses (2) which are define as the dried, edible seeds of legumes. You're probably familiar with pulses as they encompass many familiar foods such as:

Beans, often touted as the "poor man's meat" have long been a staple in the diets of cultures across the world. With their well-rounded macronutrient profiles, versatile culinary uses, and beneficial phytochemicals, it's no wonder why beans have a special place on our plates. Given the benefits that they bring, without the baggage of animal products, we think that they should be embraced by members of all socioeconomic classes! 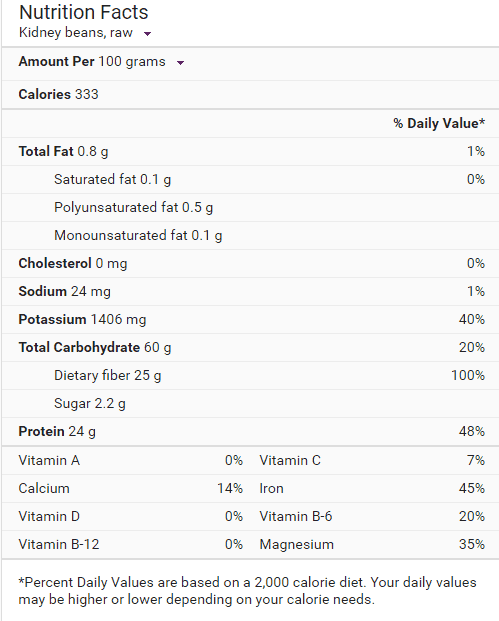 As displayed by the nutrition facts, beans are one of the most nutritionally well rounded foods on the planet. They have high amounts of protein and carbohydrates as well as large quantities of RDAs for micronutrients and minerals. We're looking specifically at kidney beans here, but the macronutrient ratios and abundance of vitamins and minerals will remain pretty much the same or similar for any type of bean or legume.

Studies Done on Beans and Legumes

Although many people think that its meaning is only reserved for athleticism, your resting heart rate is actually a big indicator of your risk for heart disease and overall mortality. Researchers studied over 20,000 men and women concluded that there was an independent relationship of resting heart rate and cardiovascular disease. Independent meaning that certain factors were weeded out statistically to confirm that resting heart rate is not just a byproduct of poor heart health, but rather a cause of it. (4)

It's no secret that aerobic exercise is one highly recommended way of reducing our resting heart rate, but what if beans could do the same thing?

There's actually some comparable evidence on this. These researchers (who were actually studying bean consumption vs. diabetes) had 121 subjects with type 2 diabetes eat at least 1 cup of legumes per day or have subjects increase fiber consumption via whole grain products such as breakfast cereals and brown rice. (5)

The legumes group saw many benefits from their intervention including a statistically significant drop in systolic blood pressure. Their resting heart rate also dropped ~3.1 beats per minute! (6)

This led researchers to conclude the following:

Incorporation of legumes as part of a low-GI diet improved both glycemic control and reduced calculated CHD risk score in type 2 DM.

Beans on Lifespan and All Cause Mortality

All cause mortality, otherwise known as simply dying from anything, is often a broad marker chosen by researchers to evaluate whether or not there is a correlation between taking an action (or lack thereof) and not dying. Researchers did a long term study on 785 people between 1988 and 1991 from four different ethnic backgrounds (Japan, Sweden, Greece and Australia) around similar age groups to see if any specific dietary habits resulted in a decrease in mortality risk. Here's what they found:

​Based on an alternative Cox Proportional Hazard model adjusted to age at enrollment (in 5-year intervals), gender and smoking, the legume food group showed 7-8% reduction in mortality hazard ratio for every 20g increase in daily intake with or without controlling for ethnicity (RR 0.92; 95% CI 0.85-0.99 and RR 0.93; 95% CI 0.87-0.99, respectively).

Other food groups were not found to be consistently significant in predicting survival amongst the FHILL cohorts.

Insulin resistance (which is the main impairment of type 2 diabetes) was shown in one study to be inversely related to bean and whole grain consumption (9). Researchers took 3871 healthy Korean adults and had them complete a nutritional evaluation survey. Based on the surveys, researchers grouped the participants into five logical categories based on their consumption of 63 different foods. The categories were as follows:

After adjusting for potential confounders, subjects in the highest quintile of the whole grains and beans pattern had a 20% reduced prevalence of IR than those in the lowest quintile and displayed a significant trend (OR for highest quintile = 0.80, 95% CI = 0.61– 1.03, P for trend = 0.013). No association was observed between other dietary patterns and IR.​

If you've gotten this far, you're probably thinking about increasing your intake of beans. If you're planning a trip to the grocery store, you'll quickly notice that you are presented with two options: canned or dried beans (which come in bulk or in a bag). Suddenly, you're faced with a dilemma - which type of beans should you add to your vegan grocery list?

​Luckily, these researchers in 2011 did the necessary work to help guide our decision making process. They scored beans on their nutrient density as well as their nutrient to cost ratio.

They found that canned or dried beans, often found in the bulk section of the grocery store won out on both of these metrics: They were more nutrient dense as well as more affordable. However, the difference wasn't big enough to count out canned beans all together as they are more convenient and a healthy alternative. The researchers quote:

Results highlight the benefits of choosing dried beans and also illustrate that canned beans, when drained, provide a healthy alternative. Beans, regardless of type/form, are a nutrient rich food and should be encouraged as part of an overall healthy diet.

However, given the sodium content of many forms of canned beans - reaching for the labels that have "reduced sodium" or "no salt added" is always going to be the preferred option. (11) (12)

Planning on getting a lot of canned beans? Be sure to check out our guide to the best can openers so yours doesn't fail when you need it most!

If you're planning on doing dried, a pressure cooker like the Instant Pot or Power Pressure Cooker XL makes the process easy and quick.

Do Beans Make You Fart? Beans and Flatulence

OK - so you've read all about the benefits of beans, but you still have one major concern: gas. The truth of the matter is that no one likes having the urge to fart in a social setting. It makes for an uncomfortable stomach and a social awkward situation. The sad part is is that people will actually avoid beans because they are afraid of having extra gas!

The relationship between beans and gas isn't as simple as eating them causing it. If you're new to eating beans you may experience a temporary increase, but this isn't permanent. As Dr. Joel Fuhrman explains in the video above, the more beans you eat the better your body gets at breaking down the resistant starches which in itself has several benefits such as colon cancer prevention.

If you're a person that has had an extra sensitive reaction to beans in the past and can't handle eating a single serving, Dr. Fuhrman recommends that you slowly transition by eating smaller amounts such as a teaspon or tablespoon twice a day and slowly work your way up until your body builds up the bacteria that can handle larger amounts.

As the research has shown, beans are one of the top health promoting food that you can possibly eat. Their impact on disease prevention, management, and overall lifespan has been made clear by the research.

We've put the flatulence concern to rest and so there's only one thing left for you (the reader) to do.

Start incorporating beans into your diet!