Blenders and food processors perform similar, but unique, functions in your kitchen that make them must-haves for any home chef. Blenders are perfect for emulsifying and combining ingredients, while food processors are fantastic for chopping and dicing.

There are now some blenders, like the Ninja Kitchen System, which try to perform all the tasks for both blenders and food processors. But does that make them better - or even equal - to food processors?

We’ll be exploring that topic in this guide by comparing the Ninja Kitchen System vs Cuisinart Food Processor. Keep reading to find out the following: 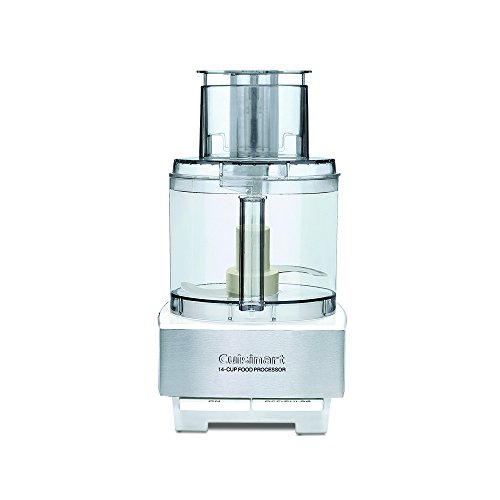 If you want one of the most versatile blenders out there, look no further than the Ninja Mega Kitchen System. Not only does it have a large 72-ounce blending pitcher, but it comes with two personal-sized blending cups for drinks and a food processing bowl. With a powerful 1500-watt motor, you can also trust that it can blend or chop virtually any ingredient.

As far as food processors go, this Cuisinart Food Processor might be one of the most-well loved. Its extra-large feeding tube makes it easy to add food to the processor, and it includes a spatula so you can effortlessly scrape out any mixtures. Its durable stainless steel blades will make short work out of your food without you having to chop it up in advance.

Our recommendation: If we had to choose between either of these appliances, we’d go for the Ninja Mega Kitchen System. We think it’s the more versatile of the two, with its large blending pitcher, to-go cups, and food processing bowl. Plus, it has the stronger motor, giving it more power to slice into your food.

It seems obvious to say that a food processor can handle food processing, but we thought this was still worth mentioning since the Ninja Kitchen System is primarily a blender. Both machines in this comparison are still capable of food processing.

For the Cuisinart, food processing is the main function. It goes without saying, then, that it’s capable of processing your food for you.

With the Ninja Kitchen System, this is not as obvious. However, it does indeed have a food processing attachment that allows it to chop, slice, and knead your food, too. Like with the Cuisinart, it’s also able to make dough for you.

Cleaning a food processor or a blender can be tedious. Food gets splattered and stuck to the container and the sharp blades.

Fortunately, another feature the Ninja Kitchen System and Cuisinart food processor have in common is their dishwasher-safe components. With either one, you can put the containers in the dishwasher once you’re done.

As you can imagine, this saves you a lot of cleaning time you would otherwise spend trying to scrub out food by hand.

BPA is a real concern for many people. This chemical, commonly found in plastics, can leach into your food that comes into contact with it.

To protect customers and give them peace of mind, both the Ninja and Cuisinart are made from BPA-free parts. This means you could drink or eat directly from the containers on either one without a single worry.

While this has no effect whatsoever on their usage, it’s a feature that may make you feel more comfortable using them. You can’t really put a price tag on that peace of mind.

Have you ever been excited to get a new appliance, only to take it home and suddenly realize you’re not sure what to do with it? If so, you’re not alone – we know we’ve also gotten excited for something without even planning all the things we want it for.

Well, the Ninja Kitchen System and Cuisinart Food Processor can both help you prepare for periods of time where you lack inspiration. Either one will come with a recipe book filled with ideas for you to draw from when your creativity seems nonexistent.

Related Article: Ninja BL770 vs BN801: Which One Should You Get?

While the power of your appliance’s motor doesn’t have to be a dealbreaker, it’s still an important point to consider. The stronger the motor in your blender or food processor, the easier it generally is for it to cut through tough ingredients like ice.

In this comparison, the Ninja Kitchen System beats out the competition. It has a 1500-watt motor, making it one of the most powerful Ninja blenders on the market today. Pulverizing ice cubes is no problem for it.

To give you some perspective, the Cuisinart Food Processor has a 720-watt motor. This is still reasonably strong and makes it suitable for a variety of kitchen tasks.

It should come as no surprise that the machine specifically made for food processing has a larger food processing bowl capacity. In fact, the Cuisinart Food Processor’s bowl can hold 14 cups, which makes it almost twice as big as the 8-cup one found on the Ninja Kitchen System.

This means that it can fit larger fruits and veggies inside it. It also means that it can chop more at once than the Ninja can. If you’re going to be food processing more often, this increased capacity could be important to you.

Versatility is where the Ninja Kitchen System is king in this comparison. On top of its food processing bowl, it comes with a large blending pitcher and two to-go cups.

The large blending pitcher can be used for your biggest blending jobs. Making margaritas for your friends and blending large amounts of dips to serve with a meal are just two examples of what it can do.

There’s also the two to-go cups. Either one can be blended directly into, making them perfect for smaller personal portions for things such as smoothies and juice. Once you’re done blending, they even include lids that you can twist on so you can take the drinks on the road with you.

The classic food processor design includes a feeding tube at the top that’s sort of shaped like a chimney. While the processor is on, it allows you to add more food to the processing container over time.

What makes the Cuisinart’s feeding tube worth mention is its extra-large size. Because it’s so generously sized, you can easily force food into the tube without needing to spend a lot of time cutting it up into smaller pieces.

The Ninja Kitchen System’s food processing bowl does not include a feeding tube at all. If you want to add more food to it, you will need to stop it, open the lid, and add however much more you feel is necessary.

One problem with powerful or lightweight blenders is that they “walk” across your counters during use. In other words, the vibration of their motors causes them to shake over your counter, potentially even falling over the edge.

Not only can this be messy, but it’s possibly dangerous. You need only imagine a functioning blender hanging over the edge of your counter by the cord as it blends away to see why.

This situation is exactly why the Ninja Kitchen System has suction cups on its base. It sticks firmly to your countertop, whether you bump into it or are just blending at a high setting.

Along with the Cuisinart Food Processor, you’ll get a convenient spatula. This allows you to scrape out any food you have in the container rather than having to upend it and smack the bottom until the food comes out.

Again, it’s not necessarily going to be a dealbreaker, but it is nice to have. It can make your use of the appliance just a little bit easier.

Ninja has an entirely unique design when it comes to their blender blades. It’s called a stacked blade design, and means the blades encircle a tower in the center of the pitcher instead of sitting in a ring on the bottom.

This same design is used in the Ninja Kitchen System. Because the blades go higher up into the pitcher, more of the food is blended instead of missing chunks.

At the end of the day, that translates to less unpleasant chunky surprises in your otherwise perfectly smooth drinks.

With some appliances, learning to operate them can take time. They have control panels filled with buttons, dials, and obscure settings that you might never even use the entire time you have them.

With the Cuisinart Food Processor, it couldn’t get any easier. It’s built so that all you need to do push one button to use the food processor and that’s it. No need to mess with tons of buttons and settings.

Can the Ninja be used as a food processor?

Whether or not you can use a Ninja blender as a food processor depends on which Ninja you’ve chosen. There are many different blenders made by Ninja, as they’re one of the biggest manufacturers of blenders today.

The Ninja Kitchen System, for example, can be used as a food processor. It was designed with a food processing attachment for that purpose.

If you’re looking at other Ninja blenders, be sure to pay attention to the description and its blend settings to see if it, too, can be used in food processing.

Which is the best Cuisinart food processor?

The Cuisinart food processor we’ve featured in this comparison isn’t the only one available today. There are a few different options to choose from, which might leave you wondering which one is best.

The Cuisinart food processor we chose is one of the most popular Cuisinart models out there. It has a pretty robust motor and large capacity that we’d say makes it one of the best options.

However, the Cuisinart Mini Prep Plus Food Processor is another great option for you if you’re looking for something more compact. Its motor isn’t as strong and its capacity is limited to 24 ounces, but its tiny size is ideal for kitchens without a lot of space.

Further Reading: Ninja Kitchen System vs Nutribullet: Which Should You Pick?

Despite having some similarities, comparing a blender and a food processor is a little bit like comparing apples to oranges. Sure, they have a few common features and functions, but they’re ultimately designed for different purposes.

It’s more versatile and it’s more powerful. You’ll be able to find more uses for it in your kitchen without it just being limited to either blending or food processing. You’re getting the best of both worlds with this one.