Blenders come in a dizzying array of sizes, from small, low-powered personal models to brawny behemoths intended for commercial kitchen use. This can make it challenging to know what is a good blender and especially how much power a good blender should have.

Have you ever wondered, how many watts should a good blender have? If you have, you’re in the right place.

In this guide, we will look at:

So How Many Watts Should a Good Blender Have? 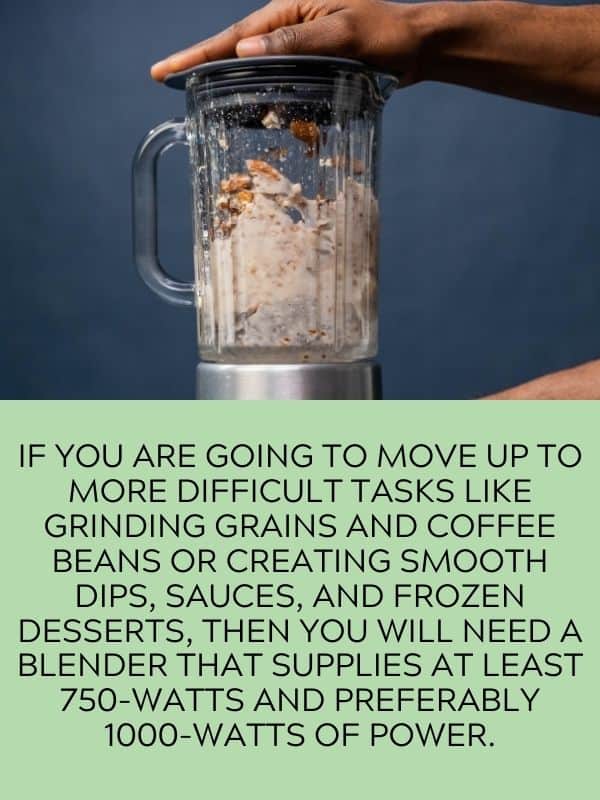 How many watts a good blender should have depends on what duties you want it to perform. The more difficult a blending task, the more power it is going to require.

For most traditional home use like making fresh fruit smoothies and milkshakes, a 500-watt blender is generally considered adequate. If you are going to move up to more difficult tasks like grinding grains and coffee beans or creating smooth dips, sauces, and frozen desserts, then you will need a blender that supplies at least 750-watts and preferably 1000-watts of power.

If you want to add frozen fruit, whole vegetables, or leafy greens to your smoothies, or make hot soups, then you will need even more power and a high-quality blender with at least a 1500-watt motor.

All of this is, of course, assuming the blenders is a top-quality machine from a reputable brand. Budget machines are often built with substandard parts that will not handle the same loads as those produced by the top brands.

The brands that Thrive Cuisine endorses as best on the market include:

Does Watts Matter in Blenders? 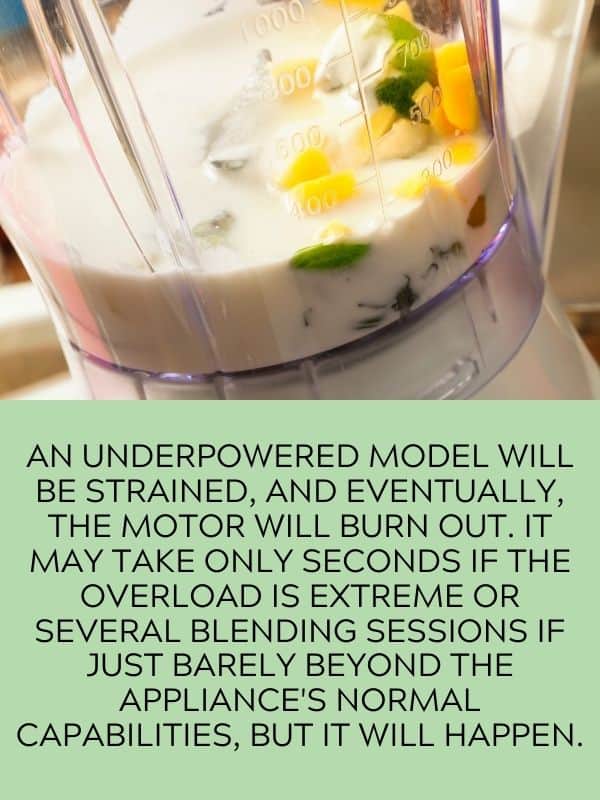 Yes, watts do matter in blenders. Watts is a measurement of how much potential power a blender can deliver for any given task. The more power your blender can provide to the blades, the more efficiently it will blend and the greater amount of work it will perform.

As a rule, a blender can’t have too much power (too high a wattage rating). However, an underpowered model will be strained, and eventually, the motor will burn out. It may take only seconds if the overload is extreme or several blending sessions if just barely beyond the appliance’s normal capabilities, but it will happen.

In simplest terms, watts (international symbol W) are an expression of how much energy a blender’s motor can bring to bear how fast. Given the same input voltage, a motor with a higher wattage rating will create more torque on startup and more horsepower while running.

For blenders, this means they will be able to perform more demanding tasks faster and without being placed under undue strain.

How Many Watts is the Average Blender?

The average home blender, across all quality levels, will provide 400 to 600 watts of power. This has traditionally been considered sufficient for most household uses.

In recent years though, as more people have discovered the benefits of whole food and vegan diets or simply started to transition away from processed foods, power demands have increased. Now, it is difficult to find a blender from a top manufacturer that doesn’t provide at least 1000W of power, and the average for high-end blenders is now up to 1300 watts.

Which Blender Has the Most Watts?

The undoubted champion of powerful blenders is the Vitamix XL, which offers a full 4.2 hp (3133 watts) of power. That is 600 more watts than the Blentec Professional 800. The Vitamix XL is a basic blender without many fancy features, but for heavy use and raw power it is hard to beat.