Wondering what Chinese Celery is? You’ve come to the right place. In this article, we’ll explain everything you need to know.

So What is Chinese Celery? 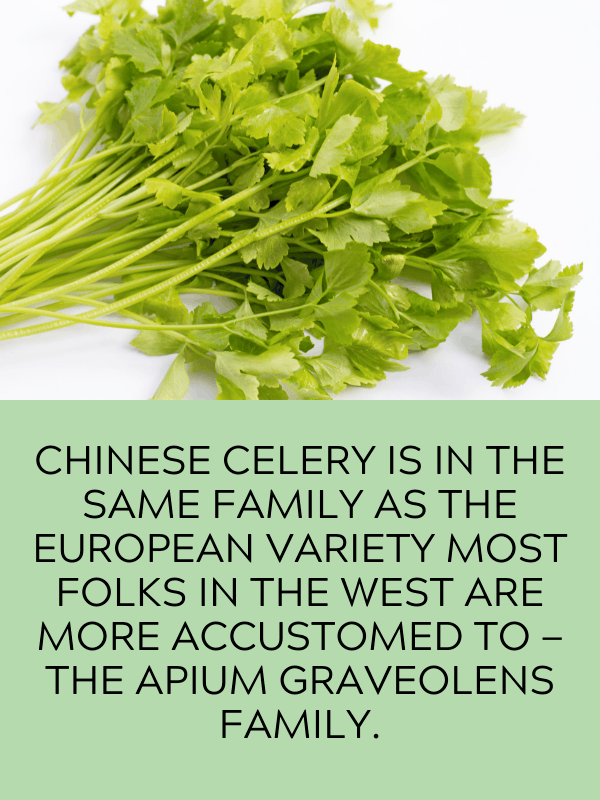 Chinese celery (also called khan choy) looks like a cross between green onion and cilantro with a slightly peppery and pungent flavor — which is somewhat sweetened after cooking.

But despite its different appearance and flavor, Chinese celery is in the same family as the European variety most folks in the west are more accustomed to — the Apium graveolens family.

Chinese celery also ranges in color from dark green to white, and both the leaves and ribs pack tremendous flavor!

Chinese celery seeds are also used in cooking as well as in much traditional Chinese medicine. Folks also dry Chinese celery and sprinkle it over dishes for extra flavoring.

The Health Benefits of Chinese Celery 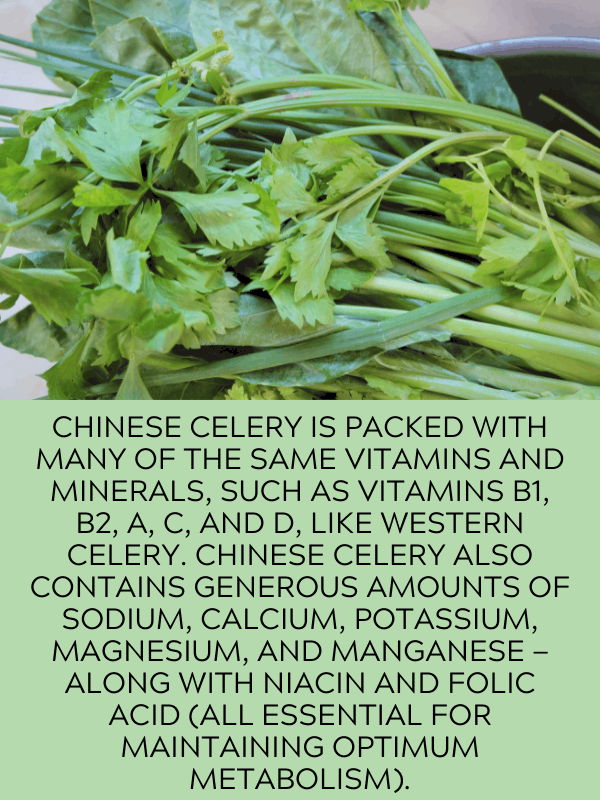 In China, Chinese celery is believed to hold many beneficial medicinal qualities (although this is difficult to verify). Folks in China often use warm Chinese celery juice to treat low fevers and jaundice. It’s also used as a diuretic and promotes healthy urination.

Chinese celery also replaces electrolytes to treat dehydration, and people in China have used it to help treat medical conditions such as rheumatism, high blood pressure, digestive issues, and scurvy.

Chinese celery is packed with many of the same vitamins and minerals, such as vitamins B1, B2, A, C, and D, like Western celery.

What is the Difference Between Chinese Celery and Regular Celery? 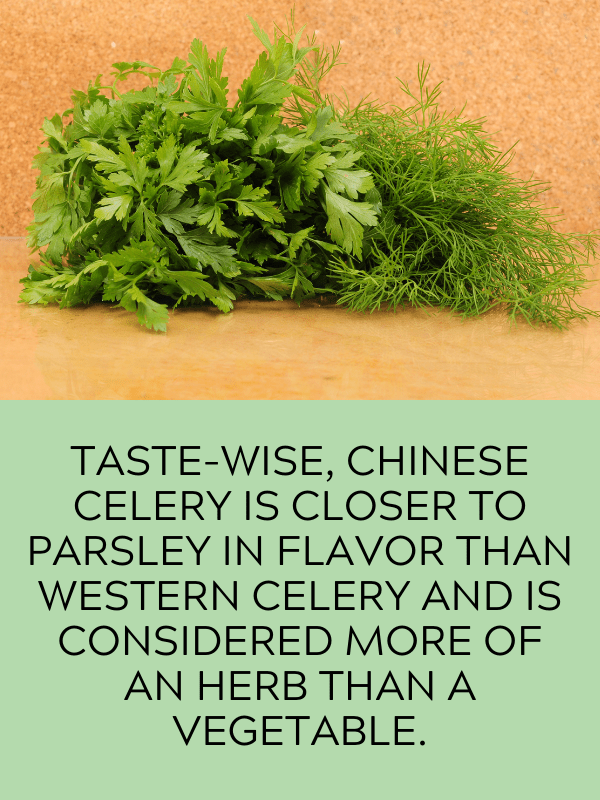 Chinese celery is smaller with thinner ribs (stalks), hollow, and very crunchy compared to the type of celery we all know and love. And unlike the western celery, each head of Chinese celery has fewer ribs, which still join together at the bottom just above the roots.

Taste-wise, Chinese celery is closer to parsley in flavor than western celery and is considered more of an herb than a vegetable.

And unlike western celery, Chinese celery is rarely served raw. You can often find this veggie in many Chinese, Vietnamese, and Tai dishes.

Is Chinese Celery the Same as Coriander? 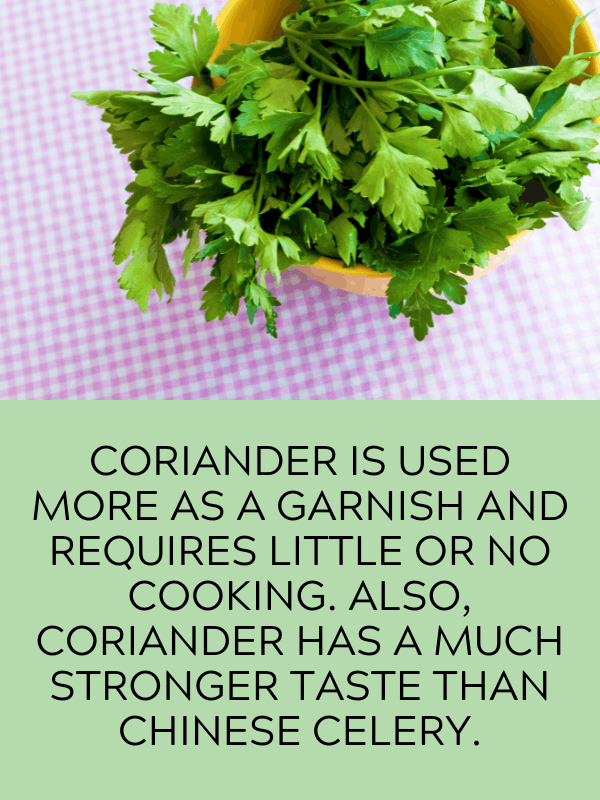 No, these two plants are not the same. While Chinese celery and coriander share a similar appearance, but not much else when it comes to taste. Coriander is used more as a garnish and requires little or no cooking. Also, coriander has a much stronger taste than Chinese celery.

Meanwhile, Chinese celery will have a more subtle flavor, closer to western celery. The gulf between these two flavors is like the difference between the taste and smell of garlic and ginger.

What Can You Substitute for Chinese Celery? 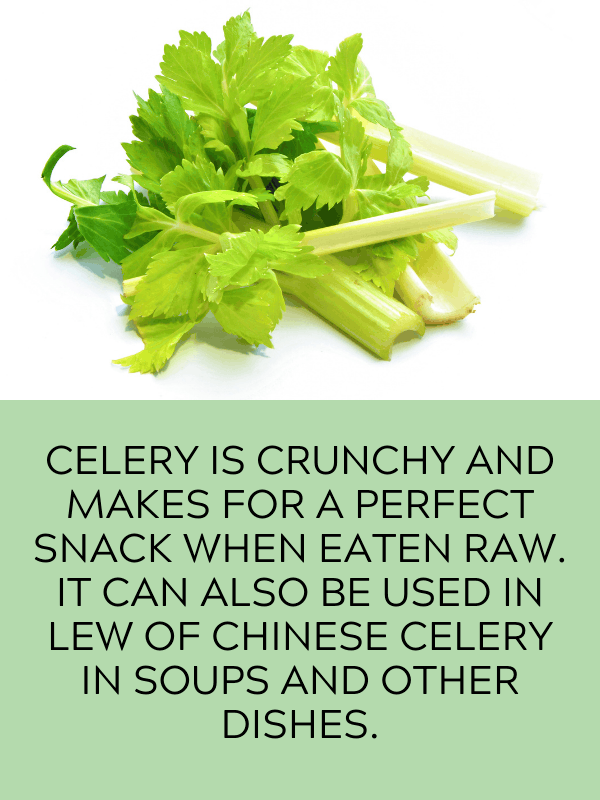 Since Chinese celery is an alternative to western celery, this works in reverse as well. Regular celery has a sweeter, more subtle flavor with broader stems. Celery is crunchy and makes for a perfect snack when eaten raw. It can also be used in lew of Chinese celery in soups and other dishes.

The health benefits of celery are the stuff of legend, packing tons of fiber, vitamins, and minerals. 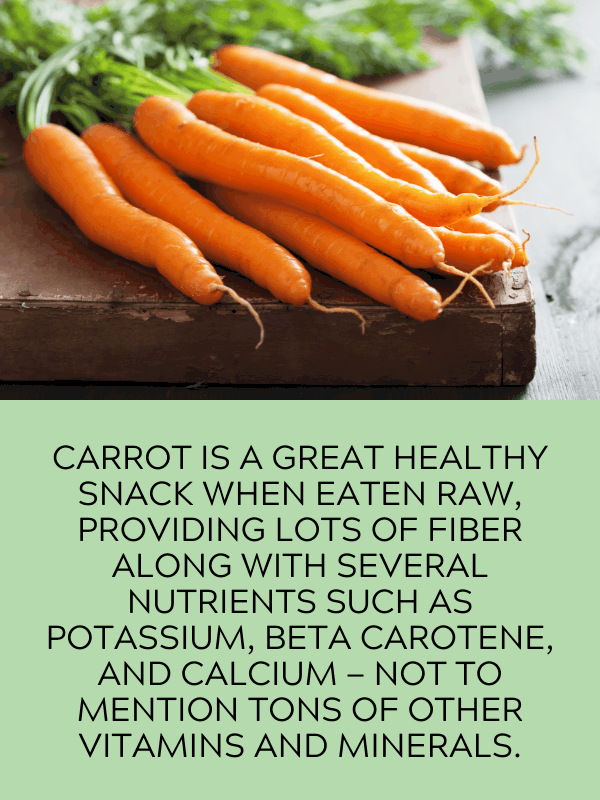 Carrots have a crunchy texture similar to Chinese celery but deliver more of a sweet flavor. This delicious root vegetable is a great healthy snack when eaten raw, providing lots of fiber along with several nutrients such as potassium, beta carotene, and calcium — not to mention tons of other vitamins and minerals.

You can also cook carrots in every way imaginable; broiled, fried, grilled, baked, and steamed. This veggie is also great in soups, stews, and casseroles. 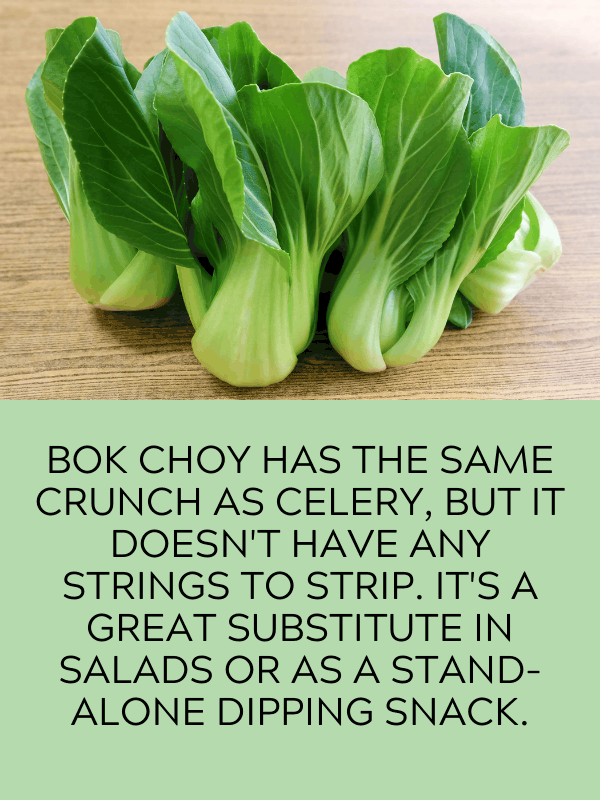 You can use Bok Choy in raw and cooked dishes if you want a Chinese celery substitute. Many folks prefer the taste of bok choy because they claim it’s more flavorful. Although it’s a leafy green vegetable, its taste is closer to mushrooms than other greens.

Bok Choy’s appearance also resembles celery in that its stems are joined together at the bottom, just above the roots. However, each bok choy stem is broader, with a single big leaf on the top end. Bok choy resembles cabbage and Romaine lettuce.

Texturewise, bok choy has the same crunch as celery, but it doesn’t have any strings to strip. It’s a great substitute in salads or as a stand-alone dipping snack.

Bok Choy also contains many healthy nutrients such as Vitamin A, C, and K and essential minerals such as iron, magnesium, and calcium. 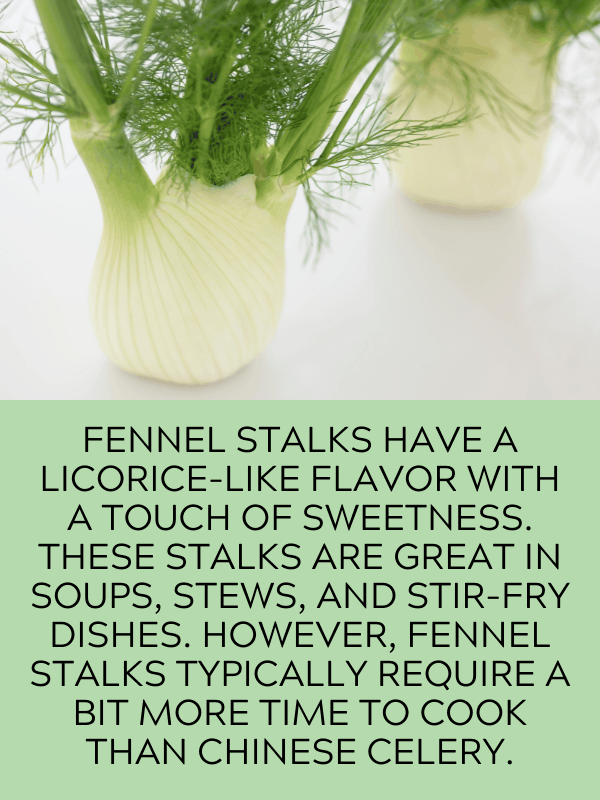 Fennel stalks have a licorice-like flavor with a touch of sweetness. These stalks are great in soups, stews, and stir-fry dishes. However, fennel stalks typically require a bit more time to cook than Chinese celery. 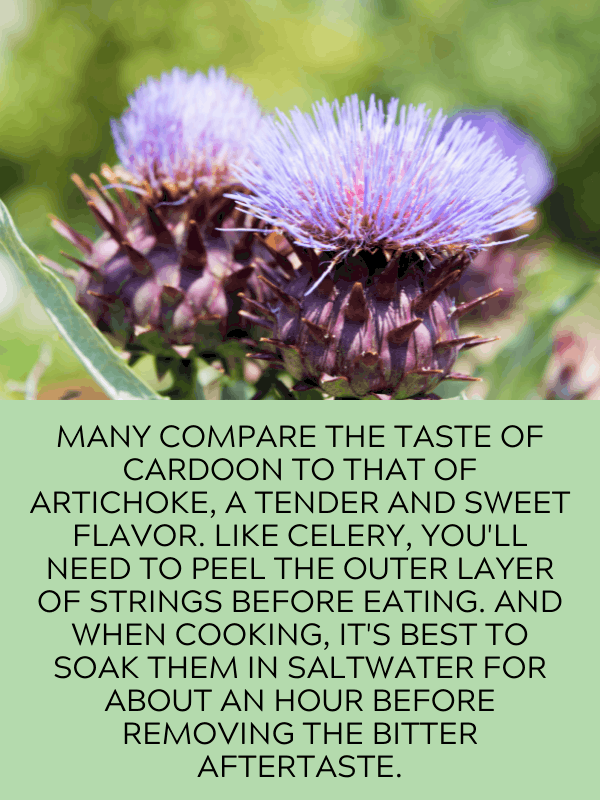 Cardoon is another excellent alternative to Chinese celery. Like the fennel stalk, cardoon usually needs a bit more time to cook. You’ll notice that this vegetable is very similar to western celery in appearance, but has larger leaves with sharper ridges.

Many compare the taste of cardoon to that of artichoke, a tender and sweet flavor. Like celery, you’ll need to peel the outer layer of strings before eating. And when cooking, it’s best to soak them in saltwater for about an hour before removing the bitter aftertaste.

Cardoons are low in calories and have nutrients that are shown to help reduce cholesterol. This veggie’s also rich in phytonutrients that serve as a powerful antioxidant. 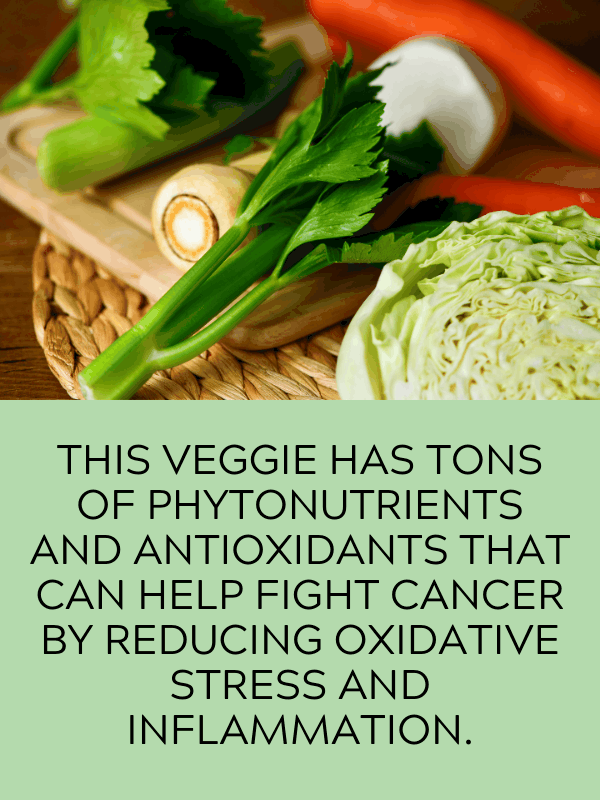 While cabbage doesn’t resemble Chinese or western celery, it is still a great alternative you can use in dishes like risotto or soups. Some add a bit of salt to bring out its flavor. Also, chopped cabbage has a crunch very similar to celery, making it a great substitute in salads. However, it’s not widely eaten as party food.

There’s also a study that shows cabbage to be one of two vegetable types able to prevent type 2 diabetes. This veggie has tons of phytonutrients and antioxidants that can help fight cancer by reducing oxidative stress and inflammation.