Wondering what a head of celery is? In this article we’ll explain everything you need to know and clear up common points of confusion…

What is a Head of Celery? 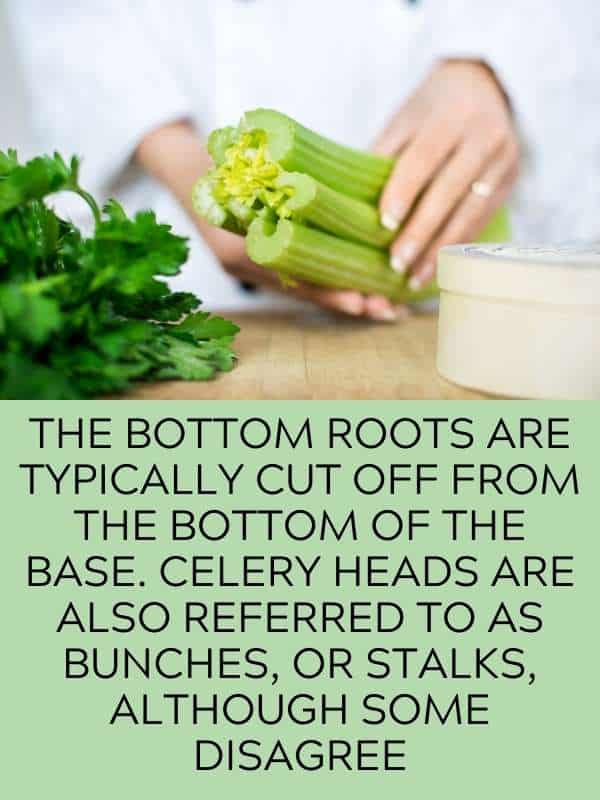 A single head of celery is more of a farming or gardening term, referring to an entire celery plant consisting of several leaf ribs (stalks) with leafy ends connected to the base. The bottom roots are typically cut off from the bottom of the base. Celery heads are also referred to as bunches, or stalks, although some disagree (more on that below).

One of the most frustrating things about celery people run into is trying to differentiate between the different terminologies used to describe parts of the vegetable. For example, when folks refer to a stalk of celery, most think they are referring to a rib.

Other nicknames for a rib of celery are branch, stem, or stick.

By now, I think you’ve got an idea of just how confusing this can all be, especially when following a recipe. Popular usage often conflicts with botanical nomenclature.

For example, you may have a recipe for a celery salad that tells you to use one stalk of celery. In this case, the recipe refers to an entire head of celery, not just one rib.

On the other hand, a recipe for vegetable soup might call for four stalks of celery. However, they are not referring to four bunches but rather four ribs. 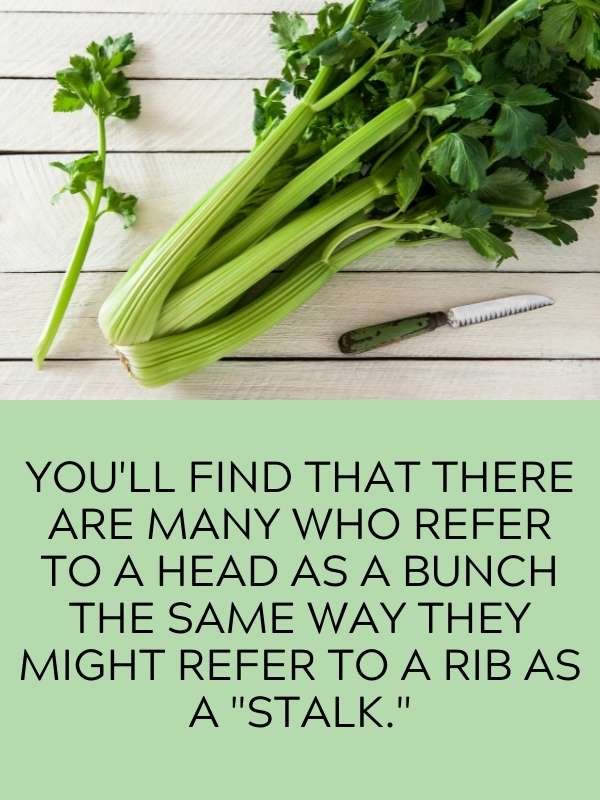 Another fun celery debate centers around whether a bunch, head, and stalk of celery are the same thing. Some folks insist that a bunch of celery comprises several celery ribs bundled together and separated from the base.

However, many plant experts refer to a single head of celery as a stalk and don’t use the term “bunch.” That said, you’ll find that there are many who refer to a head as a bunch the same way they might refer to a rib as a “stalk.”

Awe, Have A Heart! 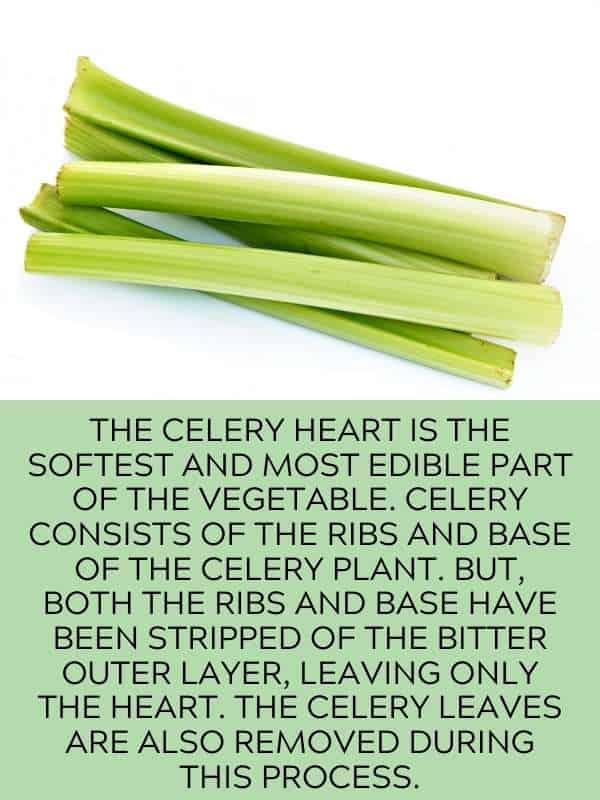 The part of the celery plant most often consumed is what’s called the heart. The difference between the head and heart is actually pretty straightforward. You see, the head consists of everything (except maybe the bottom roots).

The celery heart is the softest and most edible part of the vegetable. Celery consists of the ribs and base of the celery plant. But, both the ribs and base have been stripped of the bitter outer layer, leaving only the heart. The celery leaves are also removed during this process. 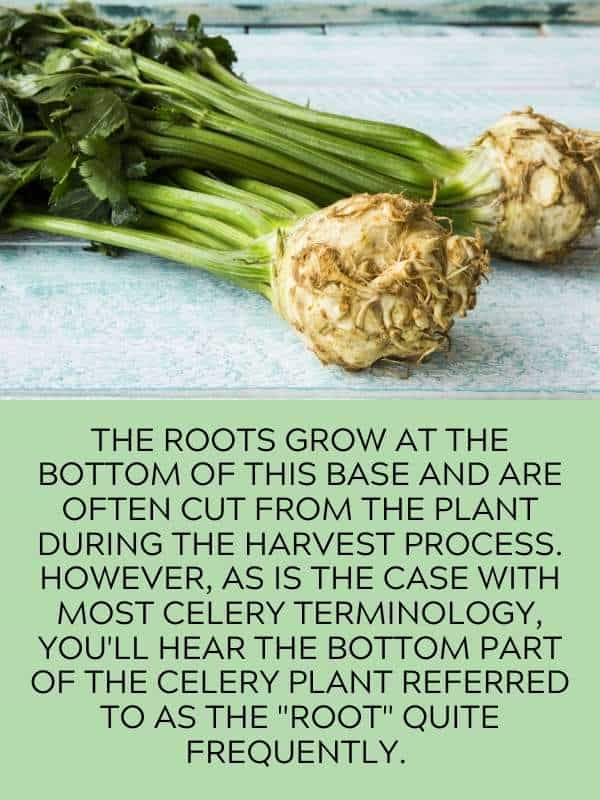 You may have noticed that I refer to the bottom end of celery as the base, and not the root. The reason is that this part of the celery isn’t a root. Most of us throw away the bottom part, but it is actually part of the collective ribs joined together as one big piece.

The roots grow at the bottom of this base and are often cut from the plant during the harvest process. However, as is the case with most celery terminology, you’ll hear the bottom part of the celery plant referred to as the “root” quite frequently.

How Many Stalks Are in a Head of Celery?

Like it or not, we’re never going to get away from folks referring to a celery rib as a stalk, so it’s best just to go with it. One head of celery can have as few as 3 and as many as 12 to 15 ribs (stalks).

What is a Large Head of Celery? 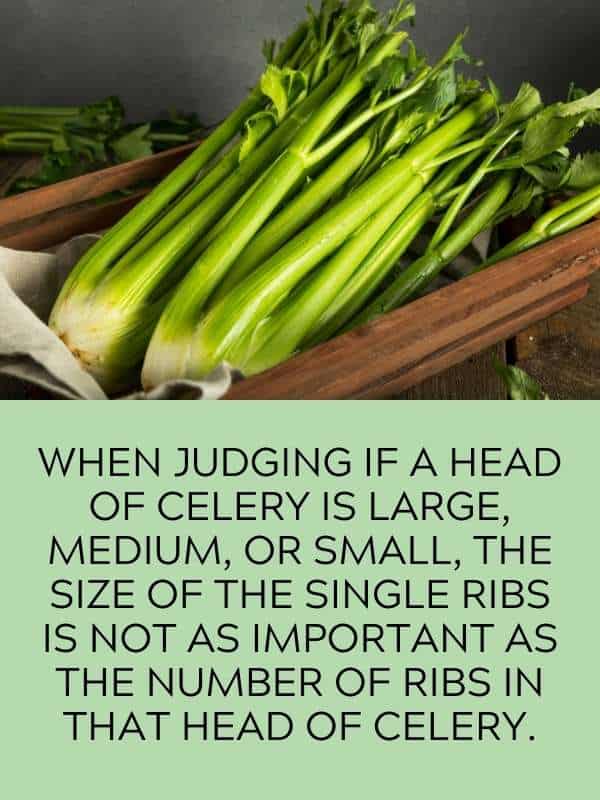 Can You Eat The Heads of Celery? 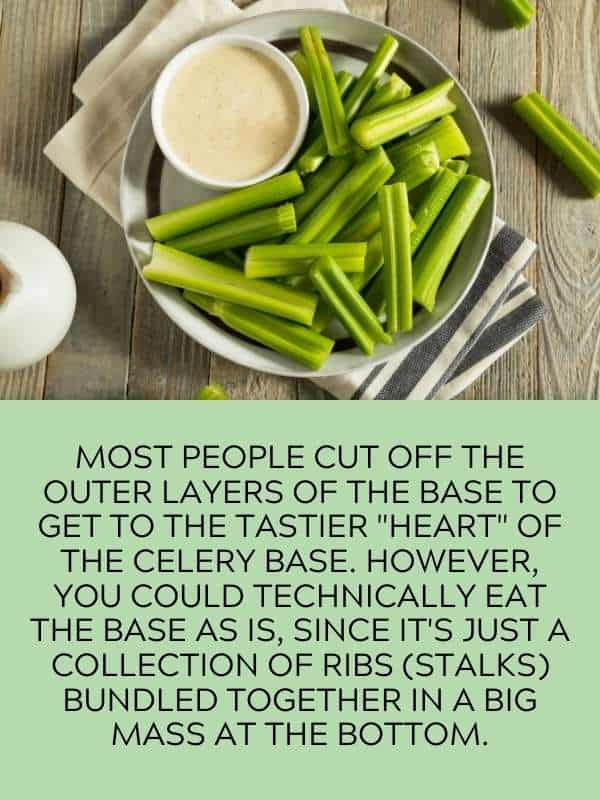 We all know you can eat celery ribs, but can you eat the entire head of celery? The answer is yes.

A common mistake folks make is throwing away the bottom part of their celery.

Because in truth, every part of a head of celery is edible, even the roots that are often cut off by the farmer or gardener can be consumed raw.

For example, a common way to eat the bottom part of celery is to cut it up and bake it. Most people cut off the outer layers of the base to get to the tastier “heart” of the celery base. However, you could technically eat the base as is, since it’s just a collection of ribs (stalks) bundled together in a big mass at the bottom.

Celery leaves are also used in many recipes, as folks dry and crush them for herbal seasoning.