Growing bell peppers and wondering, what’s the best time to harvest them? If you are, then you’ve come to the right place.

In this article, we will explain when to pick bell peppers and why. We will also try to answer some of the more frequently asked questions about growing bell peppers.

When to Pick Bell Peppers – What’s the Best Time to Harvest Them?

The best time for you to harvest your bell peppers will greatly depend on how you plan to use them. Bell peppers go through drastic changes as they mature. Not only does the color of the fruit shift, but their flavor and nutritional value alter as well. 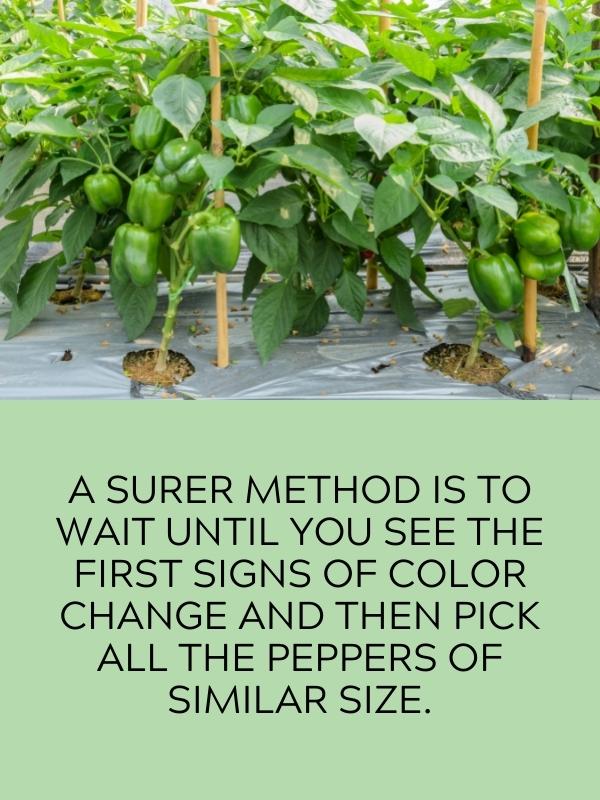 Bell peppers all start as green bell peppers, and to be honest, you can begin harvesting as soon as the first fruits appear, but we would advise against it. Immature bell peppers can be very bitter.

If you want to pick green bell peppers, it is best to wait until the fruits reach their maximum size. For most varieties, this will be approximately 3-4 inches long and 2.5-3 across. Bell pepper come in many different sizes, though, and these number can vary greatly.

With experience growing specific varieties, you can gauge the correct size by sight. A surer method is to wait until you see the first signs of color change and then pick all the peppers of similar size.

Many novice gardeners take pictures of their plants each day to make changes easier to see. If you choose to do this, try to take your pics at the same time each day, so the lighting is as consistent as possible. 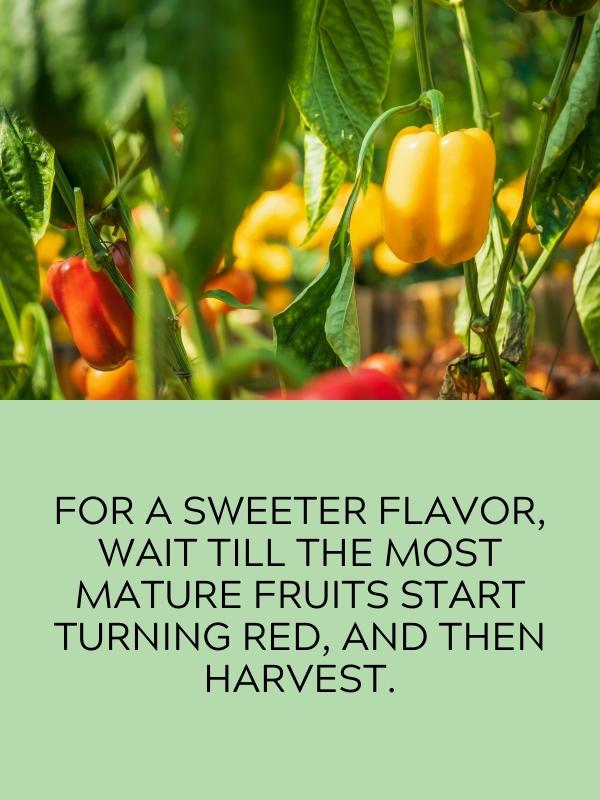 If you prefer a sharper taste, picking your bell peppers as soon as they have turned completely yellow is best. For a sweeter flavor, wait till the most mature fruits start turning red, and then harvest. 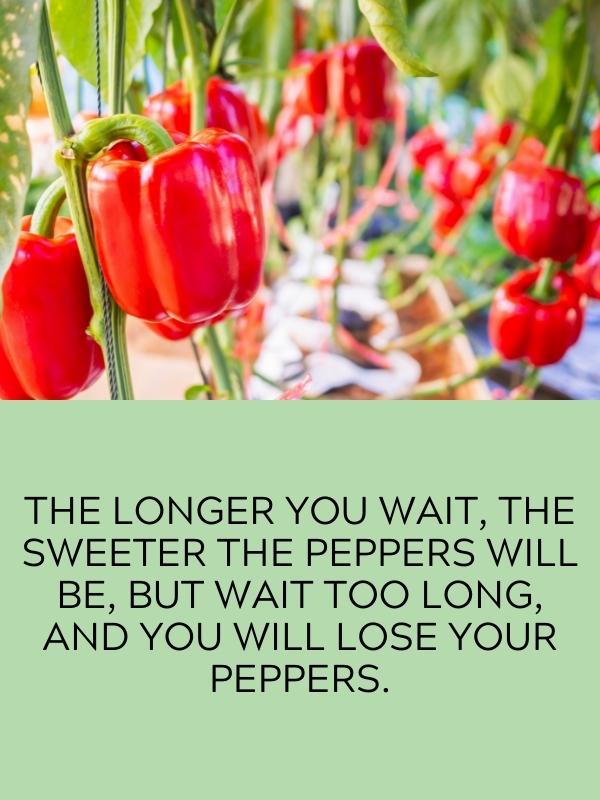 When bell peppers turn red, they are reaching their full maturity. This is when they will be the sweetest and most nutritious. If you have waited this long to harvest, then congratulations. You’re a very patient person.

Timing your red bell pepper harvest can be tricky. The longer you wait, the sweeter the peppers will be, but wait too long, and you will lose your peppers.

Red bell peppers can go soft overnight and, once they do, should be discarded or only saved for seeds.

You want to pick red bell peppers while they are still smooth and firm to the touch. As with many things in gardening experience is the best teacher.

What Happens if You Pick Bell Peppers Too Early? 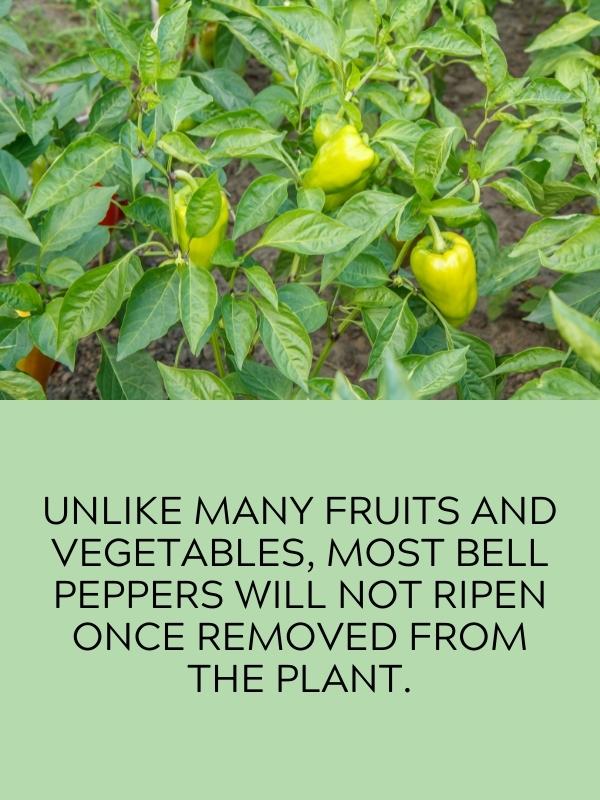 If you pick your bell peppers too early, you have bitter peppers, and unfortunately, there is little you can do about it. Unlike many fruits and vegetables, most bell peppers will not ripen once removed from the plant.

If this happens to you, don’t panic. All is not lost. Immature bell peppers make excellent pickled peppers.

How Do You Pick Bell Peppers off the Plant? 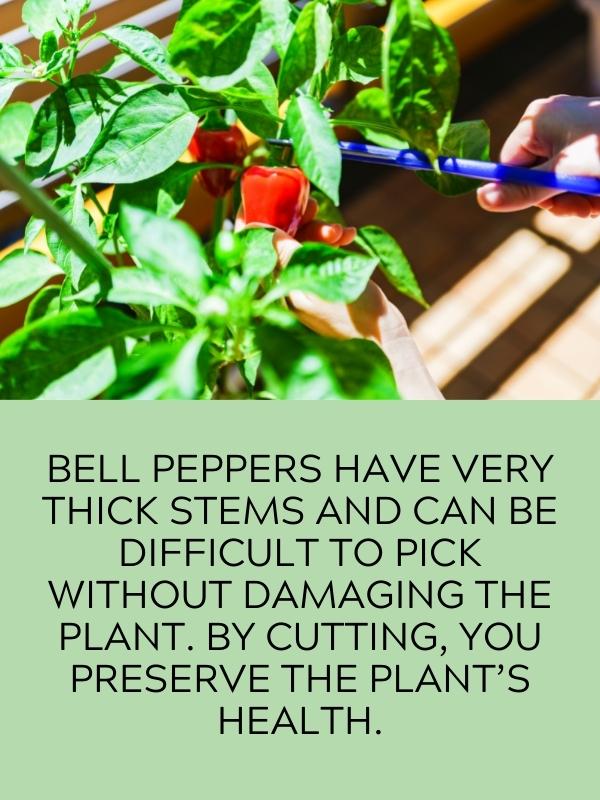 It is best to harvest bell peppers by cutting them free with a sharp pair of gardening shears. Bell peppers have very thick stems and can be difficult to pick without damaging the plant. By cutting, you preserve the plant’s health.

This makes it possible for the vine to put all of its energy into producing larger, sweeter, and more fruits. Depending on the weather conditions in your region, you should be able to get two full harvests off your pepper plants if they are properly cared for.

Do Bell Peppers Ripen on the Vine? 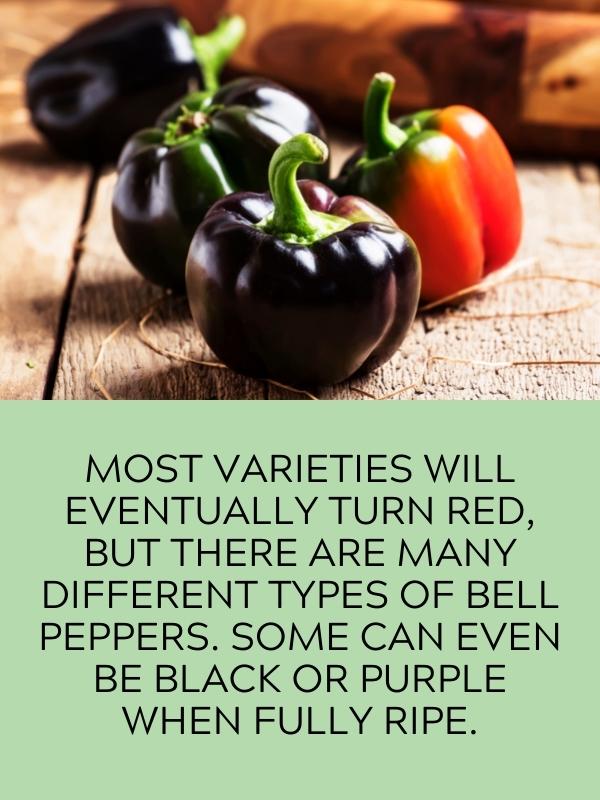 Yes, bell peppers do ripen on the vine. All bell peppers start green and then slowly change colors as they mature. Most varieties will eventually turn red, but there are many different types of bell peppers. Some can even be black or purple when fully ripe.

You should be aware that most bell peppers will not ripen after being removed from the plant. Some varieties will, but they are the exception and not the rule.

How Long Does It Take for Bell Peppers to Turn Red?

Most bell peppers will produce fully ripened red fruits 70-80 days after you set them out in your garden. Green fruits should appear 50-60 days after transplanting, and it will take 2-3 weeks for them to mature and turn red.

How Big Should Bell Peppers Be Before Picking? 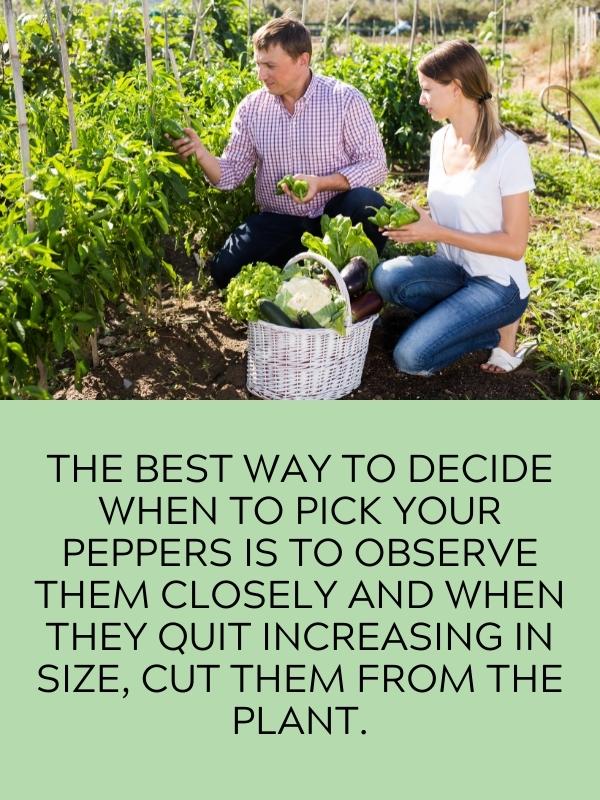 It isn’t easy to give a blanket answer on how large bell peppers should be before you pick them. There are over 1,000 different varieties of bell peppers, and they come in a range of sizes.

The best way to decide when to pick your peppers is to observe them closely and when they quit increasing in size, cut them from the plant. That is for green bell peppers, of course. For other colors, you should go by the color change.

Taking pictures of your peppers on a regular schedule can make it much easier to gauge these changes.

Some bell peppers will mature slightly after being picked, but most will not. In the majority of cases, your bell peppers will go soft before any noticeable change in taste occurs. It is better to buy or harvest peppers at the point of maturity that you want to use them.

Why Are My Bell Peppers So Small?

There are several possible reasons your bell peppers could be small. The most common cause is insufficient water, but other possible causes could be:

There are a few tricks that can help you grow larger peppers. Removing about a third of the buds from the plant will make more resources available for the remaining peppers. This usually results in larger peppers.

Another old gardener’s trick is to mix two tablespoons of Epson salt to a quart of water in a spray bottle. Lightly spray the blossoms on your plants every two to three days and watch the magic. Bell peppers love magnesium.

Do Bell Pepper Plants Come Back Every Year? 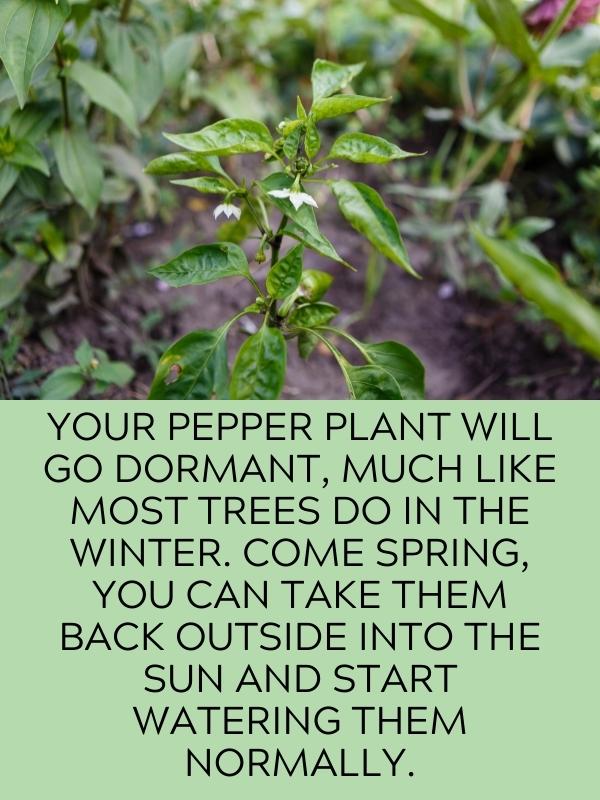 Bell peppers are perennials that can keep bearing fruit for up to five years. Overwintering them, though, does require a bit of care.

Bell peppers will not tolerate frost or temperatures below freezing. Over the majority of the United States, this means you will need to bring them indoors. Even indoors, you want to keep them between 50 and 55 degrees.

If you have a suitable location, bring your plants in before the first frost.

Your bell peppers won’t require much water or light while being stored. The light from a window or a few hours a day under a fluorescent lamp is sufficient.

Reduce watering your pepper plants to once every three to four weeks. You want the soil to remain moist but not wet. Soon you will notice the leaves beginning to curl. This is normal.

Once the majority of leaves have withered, prune your plant back to a few main Ys. Leave 2-3 inches of a limb at each Y.

Your pepper plant will go dormant, much like most trees do in the winter. Come spring, you can take them back outside into the sun and start watering them normally. In a week to two weeks, you should begin to see new growth.