There's a lot of confusion out there, but this guide is here to make it easy.

Mobile users can scroll from left to right by swiping.

The main differences between the 5300 and the 5200 comes down to the motor-power, jar style, pulse feature and color selection as seen in the chart above.

Here's what you should know about each of those attributes...

The sizing of the jars is probably the biggest and most important difference between these two blenders. The wider jar on the 5300 offers in advantage in that it has the ability to sit under a low cabinet. However, it always takes a little bit more volume of ingredients to get a vortex going on a wider-mouth jar.

The reason for this is simply because the taller jars are skinnier at the bottom. This means that a vortex can form easily with less liquid. On the other hand, you'l have an easier time getting a vortex for super large servings in a wider-base jar.

Simply put - wider jars are better for making large batches while more narrow jars are better at small ones. At the end of the day, they can both do the same thing, especially with use of the tamper.

Do note: You can get a smaller 32 oz jar later down the line if you're finding small batches to be problematic with the 5300. 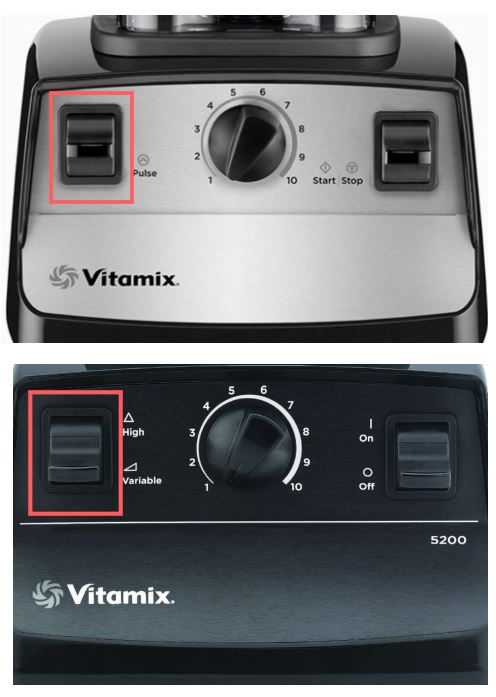 The HIGH on the 5200 will basically turn the blender into "turbo" mode, which is a function of the original Vitamix design. Once you make this switch, variable speed mode is disabled.

On the other hand, the 5300 has all the speeds you need with the knob. I wouldn't say that the turbo or "high" feature gives it any sort of advantage.

Again -- all the Vitamix models can do the same thing in terms of the meals they can blend up.

We'll talk about the pulse function in the next section.

The pulse feature is nice to have, but not totally necessary. It's simple enough to pulse the blender by toggling it on and off. In fact, that's what I do with my older Vitamix unit and it works pretty well.

However, it's probably not that great for the machine having to actually power it on and off.

If you're wondering what you would need pulsing for, it's good if you want to get a rough chop on ingredients without totally pulverizing them.

You'll end up using it more than you think.

​The 5300 comes out slightly ahead in horsepower, which gives it a slight edge, even though power isn't everything when it comes to a blender.

You'll still be able to do the exact same blending jobs, but a slightly better motor on a blender that's well designed like a Vitamix will make the process just slightly more seamless.

In other words, don't worry that having a slightly weaker motor won't be able to handle the Vitamix essentials like...

Both the 5200 and the 5300 can do it and do it well. It's just a matter of a little extra tamping here and there and feeling slightly more/less resistance on the machine.

Obviously, colors are subjective. If you HAVE to have a certain color that's not offered with the 5300, then you know which one to choose.

As of writing this, the 5200 has a much wider color selection - at least on the Vitamix website. You may be able to find different things on different retailers like Amazon.

Both units come with a tamper, but I just wanted to bring it up because it's probably the best part about a Vitamix!

One thing I dislike about Blendtec units is that sometimes ingredients will get stuck and I'll have to stop the unit so that I can re-adjust and make them hit the blades.

I NEVER have to do that with a Vitamix.

That's what makes both of these blenders top of the line, no matter which one you choose!

But overall, I think the Vitamix 5300 is a better enough unit to command a slightly higher price.

I might also consider getting a 32-ounce container on the side for smaller jobs. They're not that expensive, and it completely mitigates any disadvantage that the tall jar has when it comes to making smaller batches.

Want to learn more about blenders and see our top picks of all time? Be sure to check out our full guide on different types of blenders here.